What Would Happen to the Eurozone if Greece Leaves? 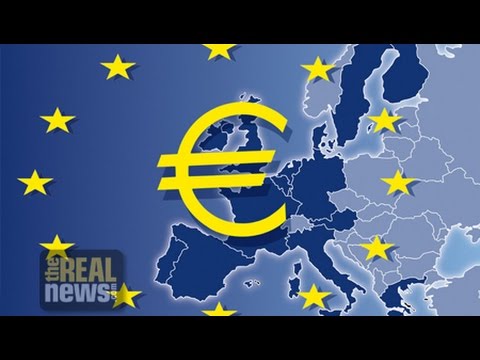 This Friday the Greek president is expected to call for early elections in September. This comes a week after former Prime Minister Alexis Tsipras resigned following fierce opposition within his government to the latest bailout agreement with the Troika. Syriza will face a challenge from the Popular Unity party led by the former energy minister along with 25 other MPs who defected from Syriza. The anti-austerity platform of the party includes an exit from the eurozone. With elections currently expected to take place on September 20, the question now is what will it mean for the future of the eurozone.

Joining us now to discuss all of this is Gerard Dumenil. He is an economist and former research director at the French National Center for Scientific Research. He is also the coauthor of the book The Crisis of Neoliberalism, and he’s currently working on a new book, entitled The Stability Frontier. Thank you for joining us, Gerard.

DUMENIL: I’m not sure the effect would be very big, because everything has been prepared. Actually, the European authorities have created a system in which European governments are backing the Greek debt. And now private banks have very little interest in the Greek debt. And Greece is a small country in Europe.

And so I believe the effect will be actually small. Maybe a political effect more than economic effect.

DESVARIEUX: And you mention the private banks would have little interest, why is that?

DUMENIL: Well a few years ago, private banks like France, French banks for example, began to finance the Greek debt, because interest rates were very high. But as risks were increasing, and when the eurozone created the new institution that I mentioned, they very, very dramatically went out of financing Greece. And now for example, the financing coming from French banks to Greece is zero.

DESVARIEUX: But Gerard, what about the argument that if Greece leaves the eurozone that the prowess of the European Union would become a lot weaker since countries would not be bound by financial ties? Essentially we could be going back to this pre-1948 Europe where competition amongst nation-states would spring up again. So Gerard, isn’t there some truth to that, that having the same currency is sort of keeping people feeling like we’re all in this together.

DUMENIL: No, I don’t think so. Right now European countries like France or Germany, the governments of these countries, they know that probably Greece will go out of the eurozone. They’ve prepared everything, you know. And actually they are teaching a lesson to other countries. You have to be very serious, according to their own criteria of [inaud.] issue debt, in particular the debt of the government. So they actually, they’re using what’s happening in Greece to teach a lesson to other countries in Europe. So I don’t think that a Grexit would cause any damage to the eurozone.

Of course you understand, I am personally against this type of outcome. But unfortunately it will probably happen.

DESVARIEUX: Let’s talk first about your point about how they’re preparing for this Greek exit. What specifically are they doing?

DUMENIL: This is what I mentioned before, which is now most of the Greek debt is financed through the new institution that they have created. The new, latest one is called the European Monetary–I forget the name in English. This is the European stability mechanism–I’ll look at my paper. European stability mechanism. And this new system you know, are back–in this new system, the eurozone governments are backing the debt of Greece. So it will mean that the government will have to pay a little bit of a fraction of the Greek debt, which is not a big deal at all. Because as I said, the Greek debt compared to the economy of Greece is big. But compared to the economy of the eurozone, it’s very small.

DESVARIEUX: You also mentioned that you would not be for Greece exiting the eurozone. Why is that?

DUMENIL: Because personally I think they should lead us to an analysis of what happened with Greece. How their government behaved, how neoliberal policies were responsible for the current crisis in Greece. So Europe should do everything to actually cancel a good fraction of the Greek debt, as the IMF is now suggesting. But the eurozone governments are not ready to do that.

DESVARIEUX: I was going to say, if Greece decides to leave the eurozone, do you see other countries following suit? Countries like Portugal, Spain, and Ireland who are feeling the pressure of austerity?

DUMENIL: No, I don’t think so. I really do not think so. As I said before, European authorities are trying to teach using the Greek situation to teach a lesson to other countries. And this lesson is already [inaud.] and it will be [inaud.].

DESVARIEUX: And let’s talk about the lesson specifically. What is the lesson, then?

DESVARIEUX: Okay. It’s been five years since Greece’s debt crisis began. If the austerity policies aren’t working to promote a more robust economy, why does the eurozone want to continue to pursue them? And like you said, play by the rules or behave?

DUMENIL: Now the problem is not so much austerity, or not austerity. Going out of austerity would mean for Greece larger government expenses. It would mean larger deficit of the government, or again, growing debt. There is absolutely no way out of the present situation for Greece if as I said the European authorities, and in particular the European Central Bank, do not bail out Greece in the sense of canceling a large fraction of the Greek debt. And this is exactly what the IMF is now saying. Because the experts of the IMF understood technically that it’s completely impossible for Greece to pay such a debt, even in thirty or fifty years.

DESVARIEUX: All right. Gerard Dumenil joining us from Paris, France. Thank you so much for being with us.

DUMENIL: Okay, thank you very much. I’m sorry for not having been too optimistic about Greece, but this is how I understand the situation.

DESVARIEUX: I appreciate your candor. And we’ll certainly try to have you back on. And thank you for joining us on the Real News Network.

Gerard Dumenil is an economist and Former Research Director in the French National Center for Scientific Research. He is the co-author of The Crisis of Neoliberalism and presently working on a new book, entitled The Stability Frontier. Thank you for joining us.