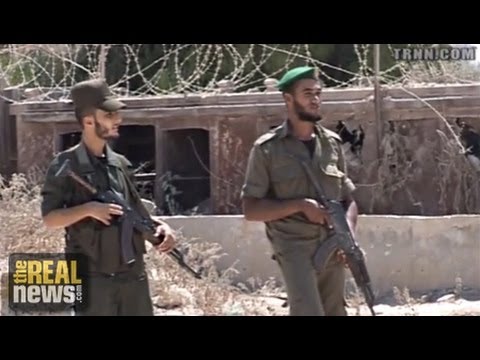 YOUSEF ALHELOU, TRNN CORRESPONDENT, GAZA: This is the Mediterranean Sea off the coast of Rafah in the southern Gaza Strip. This barbed wire separates Egypt’s territorial waters from Palestinian maritime border.

According to the Palestinian Fishing Syndicate, during the last few years, Gaza fishermen tried to fish near the maritime border, hoping to escape from Israeli naval forces that systematically open fire on their boats within the restricted 6 nautical miles area of fishing that has been under tight Israeli naval blockade for the past seven years.

It was reported that three Gazan fishermen were wounded and five others were arrested in two different incidents, this time by Egyptian naval forces during September of this year.

Those wounded and detainees are residents of the southern Gaza Strip town of Rafah, which is adjacent to the Egyptian border.

WOUNDED YOUNG GAZAN FISHERMEN (VOICEOVER TRANSL.): I and my brother were fishing not far from the beach of Rafah, opposite my house where we lived. Suddenly we came under fire from Egyptian naval forces. I was injured and we escaped toward the beach. We were chased by the Naval forces, who were using a rubber military boat.

FISHERMAN’S FATHER (VOICEOVER TRANSL.): It breaks my heart to see my son in pain with a severely injured arm attacked by our Egyptian brothers. Thank God my son is alive. It’s our fate to be neighbors, but the sea is our only source of income.

ALHELOU: An Egyptian military court sentenced the five Gaza fishermen to a year in jail and to a 500 Egyptian pounds fine for crossing into the country’s territorial waters. The father of two fishermen being detained now urged Egyptian authorities to release his sons, saying that they were just fishing to earn a living.

FATHER OF TWO DETAINED FISHERMEN (VOICEOVER TRANSL.): I urged the Egyptian leadership to release my sons and the other three fishermen. We are poor, and we only fish to earn a living. The accusation against the detained fishermen was that they attempted to enter Egyptian waters. I myself was arrested by Israeli naval forces some years ago. And in the past, Egyptian Navy forces were protecting us from the Israeli attacks. So, to be honest, we did not expect to be attacked by our Egyptian brothers.

ALHELOU: The Head of the Gaza fishermen Syndicate said that these two incidents were the first ever to be reported since the end of the Egyptian administration of Gaza in 1967. It is worth noting that before Morsi’s ouster, Gaza fishermen were allowed to cross into Egyptian waters under the watchful eyes of Egyptian naval forces.

HEAD OF THE GAZA FISHERMEN SYNDICATE (VOICEOVER TRANSL.): About three weeks ago, Egyptian naval forces attacked a number of Palestinian fishermen and took them to [[email protected]] port. We respected the Egyptian sovereignty. But I confirmed that there was no official warning on part of the Egyptians to our fishermen not to come close to Egyptian maritime borders, because in the past few years, our fishermen were allowed to fish in Egyptian waters. We never expected from our Egyptian brothers to open fire on us and to sentence five of our fishermen to one year in dail.

ALHELOU: Relations between Egypt and Hamas, in power in Gaza since 2007, have sharply deteriorated since former president Mohamed Morsi was ousted on July 3 by the military following mass protests calling for his departure.

Since then, Egypt has repeatedly accused the Hamas Party, an ideological off-shoot of the Muslim Brotherhood, of interfering in its internal affairs to support Morsi and the Brotherhood. This was denied repeatedly by the party.

According to political analysts the latest incidents and restrictions at the Rafah border reflect the increased tension between Hamas-ruled Gaza and Cairo.

HAIDAR EID, INDEPENDENT POLITICAL ANALYST: I think the first thing that we need to do is to have reconciliation between the Gaza Strip and the West Bank in order to be able to convince the Egyptian regime to open the Rafah crossing, because one of the conditions that the new Egyptian regime has been asking for is for the return of the Presidential Guard to the Rafah crossing and going back to the 2005 Rafah crossing agreement. And I think also that the Palestinians, or, rather, the leadership in the Gaza Strip, and even in Ramallah, should not intervene in internal Egyptian issues.

Well, you know, one of the most actually serious problems that we have been facing as a result of the siege is actually the shortages in essential material, including milk and fish and all other materials. And I think that it is ironic that Gaza is a coastal city and the people of Gaza cannot afford to buy or fish from the Mediterranean.

ALHELOU: Citing security concerns, Israel maintains a naval blockade of the enclave and imposes a limit of six nautical miles on the distance that fishermen can sail out to sea. Before the November 2013 ceasefire agreement which was reached between Hamas and Israel under Egyptian mediation that ended the eight-day war on Gaza, the allowed fishing distance was only three nautical miles. After that, it was expanded to 6 miles. According to Oslo Accords of 1993, Palestinian fishermen can fish for up to 20 nautical miles from the seashore of Gaza. But that limit was reduced three times over the past 20 years to six miles today.

Fishermen say that Israeli forces have regularly shot at Gaza fishing boats, and sometimes even within the allowed fishing distance. But there was no previous record of the Egyptians opening fire.

Fishermen from Gaza have often brought in catch from Egyptian territory, either via the sea or underground tunnels, to sidestep restrictions imposed by Israel’s naval blockade of the enclave.

GAZA FISHERMAN (VOICEOVER TRANSL.): We used to import fresh fish from the Egyptian side via underground tunnels. And nowadays we fish in shallow waters due to the restricted fishing zone. Our catch dropped sharply compared to ten years ago. So in light of the ongoing Israeli naval blockade, we are forced to fish near the Egyptian territorial waters.

ALHELOU: Meanwhile, Palestinian laborers and foreign activists are working tirelessly to transform a large fishing boat into “Gaza’s Ark” with the aim of exporting local produce in the latest bid to break Israel’s blockade on the coastal strip.

The Ark, which is being fitted out to carry goods and more than 100 passengers, is expected to set sail for Europe when it is completed by the end of this year in the latest high-profile attempt to challenge Israel’s maritime lock-down on the coastal tiny enclave.

The Ark symbolizes the fact that Palestinian anti-siege activists are not asking the world for charity in the form of aid, but want to have the right to trade freely with the world and to earn their own living with dignity.

DAVID HEAP, GAZA ARK PROJECT: Gaza’s Ark is a international grassroots campaign of direct action against the illegal and inhumane blockade of Gaza. Along with our Freedom Flotilla coalition partners, we stand with the Palestinian people and affirm their right to access their own territorial waters for fishing, but also much beyond that, to access international waters for the purposes of trade and commerce. This is because we know that no people will have economic sovereignty if they don’t control their own borders. So the right of people to trade and travel is part of the right of freedom of movement, the same as the right to travel for study purposes or health purposes or personal family reasons. We stand with the right of Palestinians to export, because from all of Palestine there are export goods that international purchasers want to buy, and that this can only happen if Palestinians control their own borders and are able to trade outward from the Port of Gaza, which is the only port on the Mediterranean currently closed for shipping.

ALHELOU: The Israeli naval blockade denies about 4,000 Gazan fishermen their right to fish freely without restrictions along Gaza’s 40 kilometer coast and prevents them from reaching areas rich with fish beyond the enforced 6 mile limit. Fishermen say that it is this miserable situation that has forced them to sail south toward Egyptian waters.

Yousef Alhelou in Gaza for The Real News Network.