Despite a temporary ceasefire to allow in humanitarian aid, the conflict between Israeli Defense Forces and Hamas fighters in Gaza continued for the twelfth day. Although the Israeli government welcomed a ceasefire proposal from Egypt and France, Israel’s military was instructed to continue its assault on Hamas. Palestinian casualties are estimated to total at least 650, including 350 civilians, and 130 children. McClatchy bureau chief Dion Nissenbaum states that "it is difficult to see how this ends."

Despite a temporary ceasefire to allow in humanitarian aid, the conflict between Israeli Defense Forces and Hamas fighters in Gaza continued for the twelfth day. Although the Israeli government welcomed a ceasefire proposal from Egypt and France, Israel’s military was instructed to continue its assault on Hamas. Palestinian casualties are estimated to total at least 650, including 350 civilians, and 130 children. McClatchy bureau chief Dion Nissenbaum states that "it is difficult to see how this ends."

Stay up to date on the situation in Gaza 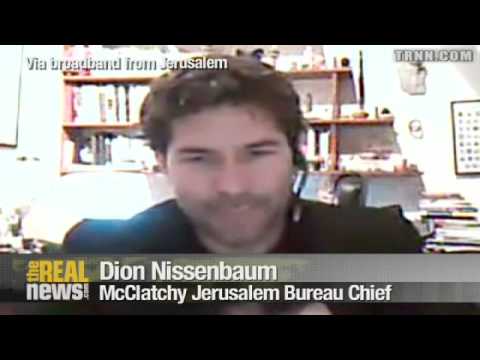 ZAA NKWETA, TRNN: Despite a temporary ceasefire to allow in humanitarian aid, the conflict between Israeli Defense Forces and Hamas in Gaza continued for the 12th day. The Israeli government welcomed a ceasefire proposal from Egypt and France, but instructed its military to continue its assault on Hamas. Palestinian casualties are estimated to total at least 650, including 350 civilians and 130 children. The Real News spoke to McClatchy correspondent Dion Nissenbaum in Jerusalem.

NKWETA: So welcome to The Real News, Dion. What’s the current situation in Gaza today?

DION NISSENBAUM, MCCLATCHY JERUSALEM BUREAU CHIEF: Today in Gaza the 1.5 million Palestinians living there had their first real chance to get a break, a respite, from 11 days of Israeli attacks, and Israeli government created what they called a "humanitarian pause" for three hours, in which they stopped firing to allow Palestinians that had been trapped in their homes for 11 days to get out, to try and find food and fuel and water, and to allow some new supplies to come in through the Israeli border. So there were a few more people venturing out today for a few hours to try and find the spare supplies that they need. Of course, the pause ended at 4 p.m. local time, and the fighting has resumed again. There’s—most of the Gaza Strip, three-quarters of the residents don’t have power at this point. The water and sewage systems are nearing collapse. Food is scarce. The United Nations is still saying that more needs to be done to ensure that the Gaza Strip doesn’t disintegrate into a(n) even greater humanitarian crisis.

NKWETA: Both sides have said that they will stop their military aggression if the other side stops first. How do you see this impasse being solved?

NISSENBAUM: Yeah, that’s basically the heart of the matter here. We’re not entirely sure what the exit strategy is at this point. There are diplomatic moves that are being led by French President Nicolas Sarkozy in conjunction with Egypt, and it seems like the center of this is a proposal to put some sort of monitoring force on the Egyptian side of the Gaza border. And as you know, this is where the network of smugglers’ tunnels has been established by Hamas to bring in weapons, to bring in supplies that have been cut off because Israel has closed its borders with Gaza. And those tunnels have been methodically bombed by Israel over the last 11 days, and Israel was saying that those tunnels must remain closed, Hamas can’t be allowed to reopen them and rearm if there’s going to be any serious ceasefire. And there does seem to be some momentum to do this on the Egyptian side. The catch, of course, is that nobody is talking to Hamas in this equation, and Hamas is saying, "We’re the ones that you have to stop, we’re the ones that have to decide this, and if you don’t talk to us, you don’t negotiate with us, then we have no reason for us to stop firing." What the Israelis are basically saying is that they believe that the last 11 days have significantly hampered Hamas’s ability to fire rockets and sent them a clear message that if they continue to fire rockets, this is the kind of response that they get. So they are trying to argue—they believe that they can essentially cut Hamas out of this equation and sort of impose a deal on them; and, of course, Hamas is saying that that won’t work. And we’ll just have to see.

NKWETA: So how do you see this thing playing out? Is there a diplomatic solution?

NISSENBAUM: Well, there will have to be a diplomatic solution. I think it’s just a matter of time. The Israeli security cabinet met today to consider expanding the operation, and we’re hearing that they basically deferred the decision on that, perhaps to give some of this diplomacy time to work. The problem, again, is that Hamas is not part of the equation at this point, and it is not clear that they will accept any deal that is imposed on them. It’s quite clear that Hamas is fractured at this point. The leaders in Gaza are underground, really unable to negotiate. The outside leaders who tend to be a little bit more hardline are rejecting any kind of compromise at this point. And so it’s difficult to see exactly how this ends. If Hamas believes that it’s to its interest to stop the firing, to negotiate over the release of Gilad Shalit, the Israeli soldier that they captured in 2006, you know, and has been held in Gaza since then, if they believe that it’s to their interest to stop the firing, negotiate on this, perhaps get a deal with Israel that allows Palestinian prisoners to be freed to give them some sort of victory out of this, maybe there’s a route out. But it’s not possible, and I don’t think anybody can really see exactly how this deal is going to take shape where it’s evolving, it’s fluid, and the parameters are not set at this point.

Dion Nissenbaum covers the Middle East as Jerusalem bureau chief on his blog. Dion has covered the conflict in Iraq, working as both an embedded reporter with the U.S. Marines and as a unilateral reporter based in Baghdad. In 2004, Dion helped cover the landmark Palestinian elections after the death of Yasser Arafat.