Methane Emissions From Livestock Are Much Higher Than Estimated 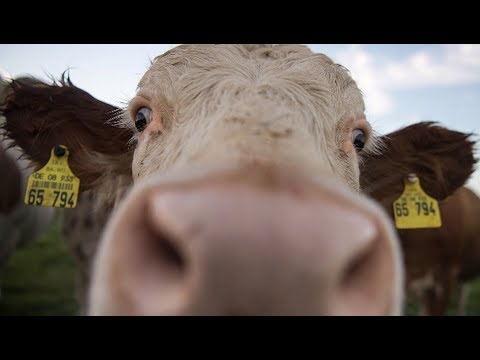 DHARNA NOOR: Welcome to The Real News Network. I’m Dharna Noor, coming to you from Baltimore. Methane is one of the most powerful greenhouse gasses that gets trapped in the Earth’s atmosphere, and new research suggests that the global level of methane emissions from livestock is significantly higher than previously thought.

The recent study called, Revised Methane Emissions Factors and Spatially Distributed Annual Carbon Fluxes for Global Livestock says that previous estimates, which are based on 2006’s data from the intergovernmental panel on climate change are low.

I’m pleased to be joined by one of the co-authors of this study to discuss it. Doctor Ghassem Asrar is the director of Joint Global Change Research Institute, a partnership between the Pacific Northwest National Laboratory and the University of Maryland.

Previously, he’s worked with NASA. He was also the deputy administrator for Natural Resources and Agricultural Systems with Agricultural Research Service of the U.S. Department of Agriculture, and has served as the director of the World Climate Research Program in Geneva, Switzerland. He’s received numerous awards and honors, including the NASA Exceptional Performance Award, the National Distinguished Service Medal and the NASA Medal for Outstanding Leadership.

DHARNA NOOR: Let’s cut right into it. What are the key takeaways from this recent study?

GHASSEM ASRAR: Basically, we can now explain some of the increases in the atmospheric methane concentrations that have been observed since 2007, and we can attribute some of those increases to livestock, changes in the population, the size and distribution of livestocks globally. This is important because there are two major contributing factors with these increased methane emissions by agricultural system. This part of the agricultural systems, primarily livestock.

One is the traits or the characteristics of livestocks themselves. Their size and their type. The other factor is the way that the effluence that are secreted by the animals are being managed increasingly in large ponds because of the way the livestocks are raised, especially in the U.S. and North America, and increasingly in Latin America and also in Asia.

DHARNA NOOR: You mentioned the increasing size of these livestock animals, but are there not also simply more livestocked animals being reared due to population growth and growing consumption of meat?

GHASSEM ASRAR: Absolutely. This was one of the interesting finding of the study was, we see significant regional variations. For example, surprisingly, we found that the emissions in Europe have been declining. We found that emissions in Asia are increasing. The emissions in Canada and U.S. more or less stayed the same or declined slightly.

This was somewhat revealing, because in previous studies focused on having an estimate of it globally, and through our study, found a way to identify, quantify the regional variation as well, is very, very important to the nation, the world, whereby they intend to reduce the emissions in order to support the Paris agreement. By providing the finding of this study, they will be able to manage the methane emission more effectively, especially as I said, in parts of the world where the emissions have been increasing over the past couple of decades.

DHARNA NOOR: Could you please tell us how you came to these conclusions globally? What methodology you and your co-authors used, in layperson’s terms?

GHASSEM ASRAR: Absolutely. One thing that we did, we wanted to make sure that when we compare our results with the previous estimates, the methodology is the same. In other words, we use exactly the same process, and the methods and calculations that the intergovernmental panel on climate change had used in 2006.

What we did differently was to focus on the data and make sure that we have most up to date data, regionally, at the national level, at the global level and differentiate among different types of livestocks, the types of management practices that are used in different parts of the world by different nations. We focused on the details that made a significant contribution to the derived estimates.

GHASSEM ASRAR: Absolutely. In some parts of the world still, they use free range and the distributed livestocks on the grassland or the graze land. Basically, is a much more efficient way of using the effluence for returning back to soil, for example.

That would be an effective way of reducing the emission back to the atmosphere, for example.

DHARNA NOOR: What are some of the countries that are currently doing that?

GHASSEM ASRAR: Yes. Increasingly, some countries that they don’t have energy sources internally, they use the methane digesters to capture the methane and reuse it for heating or operation of their facilities, for example.

DHARNA NOOR: What are some of the countries that are using those practices?

GHASSEM ASRAR: Mostly in African countries, they do that. China and some other countries in Asia are also using that practice more and more frequently, because every time that they capture and use the methane, they don’t have to rely on, for example, the petroleum-based source of energy for heating, and cooling and operation of their feed lock facilities.

DHARNA NOOR: Let’s talk about the impact of these methane emissions. The Environmental Protection Agency previously estimated methane being 34 times heavier than carbon dioxide, while others have estimated that methane is as much as 86 times stronger at trapping heat in the atmosphere than CO2 over a 100 year time scale. So, what is the consensus among scientists who specialize in this field? What’s the relative impact of CO2 versus methane?

GHASSEM ASRAR: Absolutely. Everybody’s in agreement that the warming potential of methane is significantly higher than CO2, however the life expectancy of methane is much, much shorter than CO2. CO2 stays in the atmosphere for almost a century plus. Methane life span is less than a season or a year, so that is the tradeoff between the two. Of course, a concentration of methane in the atmosphere is significantly less than CO2. The main reason for focusing on and understanding the total concentration, the sources, is to be able to quantify a methane contribution to the warming potential of the atmosphere in the future.

As important as significant is methane release, for example, from livestock. The other contributing factors from agricultural such as rice paddies. When you combine all of that together, still is this small component of the total methane cycle for the planet Earth.

The biggest worry among scientists, is potential warming of the high latitudes. The northern latitudes, where currently, there is a very large amount of methane is captured in that part of the world, because it’s frozen. It’s cold, and God forbid, if that part of the plant warms up, the concentration, the amount of methane that is going to be released in the atmosphere would be much, much larger than what currently, agricultural systems contribute to.

DHARNA NOOR: Now, I want to finish by asking about the repercussions of these findings in terms of previous calculations for lowering greenhouse gas emissions in the United States, and what can be done to curb growing emissions from livestock.

GHASSEM ASRAR: Indeed. Again, that was one major objective of this study, to find out the root causes. As I stated, clearly, now that we know what are the major contributing factors to the methane emission from livestocks, the countries can use that information, that knowledge to manage their emissions much more effectively.

For example, out of the 190 plus countries that have signed the Paris agreement, almost 80 percent of them plan to use land related practices, agricultural system, forestry as a way to manage their carbon footprint. To manage their emissions. Clearly, here’s a tool for them. Here’s an area of potential management practice for them to, as I stated, even if they plan to use large feed lots for production of the meats to meet their population demand, there are better ways of managing the emissions from those ponds by capturing and reusing that. That way, on one hand, they can reduce the footprint on the emissions, and on the other hand, they can basically get a new source of energy.

Of course, that process requires investment and economically might be a bit expensive up front, but when you look at it over the long term, we believe the payoff will be significant. Again, by curbing their emissions and gaining, more or less, energy from it, you have accomplished two objectives at the same time. This is the type of solution that we really need to continue to come up with in order to manage our carbon footprint on the atmosphere.

DHARNA NOOR: Okay. Doctor Ghassem Asrar, thank you so much for joining us today.

Dr. Ghassem R. Asrar is Director of Joint Global Change Research Institute of the Pacific Northwest National Laboratory hosted by the University of Maryland, USA. Prior to this position, he served as Director of World Climate Research Program (WCRP) in Geneva, Switzerland (2008-2013); the Deputy Administrator of Agricultural Research Service (ARS), of the U.S. Department…