Hezbollah and the Modern History of Lebanon Pt.7 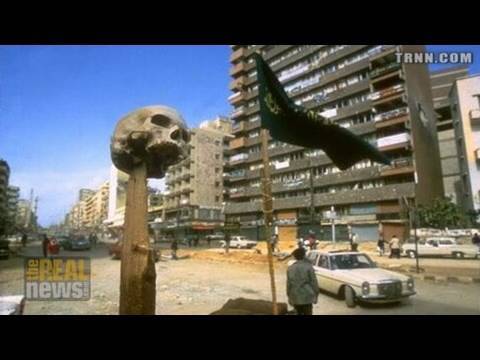 PAUL JAY, SENIOR EDITOR, TRNN: Welcome back to The Real News Network. I’m Paul Jay. We’re coming again from Beirut. And joining us again is Professor Fawwaz Traboulsi. He’s an associate professor of political science and history at the Lebanese American University and at the American University in Beirut, and his recent book is A History of Modern Lebanon. Thanks for joining us again.

JAY: So jump ahead. At some point Hezbollah emerges as quite a full-fledged fighting force.

TRABOULSI: Well, now we are in a totally new situation, in which the internal situation now deteriorates completely in more than one sense. The Phalangists’ control over the state is resisted by almost all the militias. And what you have is a number of six or seven major militias take over parts of the country at the expense of the Lebanese state. The Lebanese state practically collapsed. The control by the presidency of Amine Gemayel doesn’t go beyond the presidential palace. So you have the Progressive Socialist Party of Walid Jumblatt taking over one region, the Christian [inaudible] governed by what has become the Lebanese Forces, which is the armed forces of the Phalangist Party. You have a part of Northern Lebanon under the clan of the [inaudible], competing parties for the control of western Beirut, and the Progressive Socialist Party. Now we’re talking about small cantons, which are no more fighting each other but are controlling their own people on a very sectarian basis.

JAY: And a very profitable basis if I understand it. The taxes are being charged almost like protection money. Sometimes it’s being described as almost mafioso type control of these areas. Is that a fair way to describe it?

TRABOULSI: This is a very correct way to describe them. The term mafiaism I’ve used to describe it, because it’s a mixture of everything. It’s a mixture of ports being controlled by these militias. All those major militias have access to the coast, and all have now private boats. So there were 12 ports in Beirut. So you’re talking about commerce and import-export.

JAY: Including a big drug operation.

TRABOULSI: This is the time where the drug culture in Lebanon expands from pure hashish to poppy, and where a good part of [inaudible] is devastated under the control of the Syrian army, but with all the militias participating in it and sending it all over the place, through Israel to Egypt, from the ports to Europe. This is a time where you have hijacking commercial ships and piracy, and of course protection money imposed on your own sect. They’re taxing cars, they’re taxing business, they’re taxing individualsï¿½they’re taxing everything.

JAY: And what’s happening to the banks?

TRABOULSI: From 1975 onwards, the only institutions which were not touched were the banks. Now, the real story of the banks starts at the end of the war. The banks are faring well, but this is not the real success story. The real story is whenï¿½of course, they’ve always been very well furnished with deposits from the oil-producing countries.

JAY: And to what extent is the banks laundering the money from the drug operation?

TRABOULSI: Definitely there is a role of the banks in this, in all this, for the simple reason that we have a Bank Secrecy Act since 1954 [sic], modeled on the Swiss bank secrecy act, which means that a lot of the [inaudible] covert money operations has always been dealt through the banks.

JAY: If one of the roles of the banks in Beirut is to middle these kinds of transactions between the Middle East and Europeï¿½.

JAY: So in the midst of these cantons, as you describe, the Israelis are still controlling the south, and Hezbollah is now growing in terms of the size of its armed force.

TRABOULSI: The real story of the resistance starts after the end of the war. By 1989, the regional and international powers find that there’s no more function for the Lebanese war. Inside Lebanon there is the fight now within the sects themselves for the control of the sectsï¿½small Christian civil war between General Michel Aoun of the Lebanese Army and the Lebanese Forces of Mr. Samir Geagea, and in the Shiite part of the country also competition and war for the control of the sect by Hezbollah and ["A-mar"]. Those were [inaudible] part of the most fierce killings, a real brother-killing-brother. So the net result is weakening the Christian front, which had appeared to be victorious after 1982. So all those go, bleeding, to some form of settlement, which is mediated by the United States, Saudi Arabia, and Syria. Who should talk in the name of [inaudible] the Lebanese? It was decided that the remnants of the Lebanese Parliament, which had not been reelected since 1972, they are taken to [inaudible] in Saudi Arabia, where they chart a new political system, if you want, which now breaks the Maronite Christian dominance over political power and distributes it evenly, if you want, between the three presidentsï¿½republic, prime minister, and the speaker of Parliament. So in fact you have the three major sects quite similar in their powers, which creates a huge problem about who can mediate between them. And it was obvious. Now, in 1989-90, a major development happens, as you know, the Iraq war, and President Assad surprises everybody by siding with the allies against Iraq, in return for which he is given the right to get rid of the rebel general Aoun, who had assigned himself as president of the republic, and the Syrian army simply dislodges Aoun.

TRABOULSI: In Lebanon, ’89. And that brings practically the war to end. Syrian mandate is reconfirmed by both the United States, France especially, and Saudi Arabia, and now starts a Lebanese reconstruction, if you want, under the auspices of the Syrian government. The Syrian troops are still there. The Syrian troops are assigned the role of disarming the militias, except the militia of Hezbollah, which is considered to be a resistance movement against Israel. All the rest have to hand in their arms to the Syrian army. So that declares the end of fighting with [inaudible]

JAY: And sets the stage for a confrontation between Hezbollah and Israel.

TRABOULSI: For the continuing confrontation, yes.