Hezbollah and the Modern History of Lebanon Pt.6 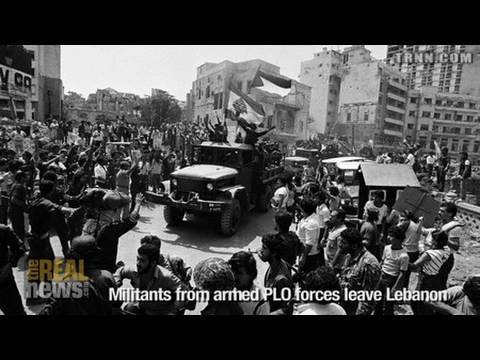 PAUL JAY, SENIOR EDITOR, TRNN: Welcome back to The Real News Network. I’m Paul Jay. We’re coming again from Beirut. And joining us again is Professor Fawwaz Traboulsi. He’s an associate professor of political science and history at the Lebanese American University and at the American University in Beirut, and his recent book is A History of Modern Lebanon. Thanks for joining us again.

JAY: So we’re in 1982. The leadership of the PLO has been expelled from Lebanon. The Israelis are occupying Southern Lebanon. Pick us up from there. What happens?

TRABOULSI: Well, first, the PLO leadership does not withdraw alone. Most of the fighters are withdrawn. They’re put on ships and mainly go to Tunisia [inaudible]

JAY: And where are the Syrians while all this was happening? The Syrians were occupying before that.

TRABOULSI: The Syrian army had withdrawn to the Beqaa and the northern part of the Beqaa. There was a Syrian contingent during the siege of Beirut left in Beirut, but in 1982 it will leave to Damascus. A part of the PLO leadership and fighters go to Damascus, but the majority go by sea, mainly to Tunisia, to Tunis, which will become the second headquarters of the PLO. In Lebanon there’s a new president, who is the brother of the assassinated president, Bachir Gemayel. His name Amine Gemayal. And it looks as if the Phalangist Party has taken over power, because the Palestinians are out, the left is weakened, and the most important events immediately are the launching of the resistance to Israeli occupation. Actually, resistance doesn’t stop to the Israeli occupation. They enterï¿½in June they are opposed by Palestinian Lebanese fighters. It takes them three months to take over Beirut. There’s fighting. Besieged Beirut or besiegedï¿½western Beirut is fighting them. When they enter Beirut, there are remnants of fighters who are fighting them. And on 16 September of that same year, 1982, the three leftist organizations that I mentioned launch a proper organization called the National Front for Lebanese Resistance, which starts operations inside Beirut. In two weeks, the Israeli army leaves Beirut. They would only occupy Beirut in two weeks, one reason being the international anger against Sabra and Shatila, but alsoï¿½.

JAY: And to remind viewers, Sabra and Shatila are the Palestinian refugee camps where there’s this massacre committed by Phalangists against the Palestinian civilians and Lebanese civilians.

TRABOULSI: With Israeli help and connivance. So you also have what the correspondent of the British Independent calledï¿½and it’s good that they left, because they were being subject to at least five or six major operations every day inside Beirut. This is the beginning of a longï¿½Lebanese nowï¿½resistance against the Israeli occupation. It’s no more Palestinians doing commando operations inside Israel. Now it’s Lebanese taking over the resistance to liberate their territory from Israeli occupation.

JAY: And is this mostly Muslim and left? What’s happening there?

TRABOULSI: It’s mostlyï¿½actually, it’s mixed, because the left is mixed, because the left is inter-sectarian. You have Christians, Muslims, Druze, fighters participating, men and women. So this secular resistance now starts to blend with another important component, which is the Shiite Amal party now, which has become quite influential in the South, and which undertakes not only military activity but also village rebellions against Israeli troops. Now, a year later, you have the emergence of Hezbollah, the Islamicï¿½anti-Israeli Islamic [inaudible]

JAY: Which is an offshoot of the Amal party?

TRABOULSI: Hezbollah is a mixture of a number of thingsï¿½Lebanese who had joined the Basij, the Iranian Guards who came in 1982 to fight with the Lebanese and the Palestinians against Israel; an offshoot of Amal, a split inside Amal; and a number of organizations, among which the Dawa Party, which is initially an Iraqi party, which now has, if you want, a Lebanese Shiite [inaudible] You have also the Lebanese who had been fighting with the PLO now joined this nascent organization. But we won’t hear of Hezbollah until ’84-85, before a limited number of operations under the Islamic resistance.