Hezbollah and the Modern History of Lebanon Pt.4 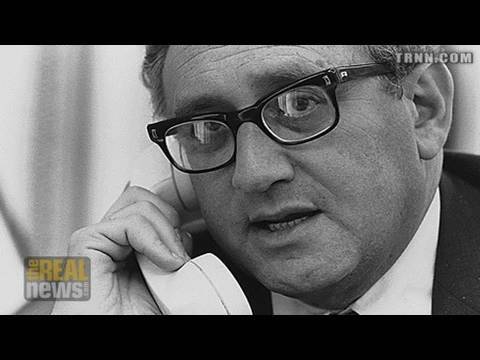 PAUL JAY, SENIOR EDITOR, TRNN: Welcome back to The Real News Network. I’m Paul Jay, coming again from Beirut. And joining us again is Professor Fawwaz Traboulsi. He’s an associate professor of political science and history at the Lebanese American University and at the American University in Beirut. And his recent book is A History of Modern Lebanon. Thanks for joining us again.

JAY: So we got ourselves up, in the earlier segments, to about 1973-74 and the outbreak of the Civil War. So why does it become at the scale of a civil war? I mean, many countries in the region and elsewhere have similar contradictions, but it doesn’t get so violent as it got here.

JAY: And to be fair, you wouldn’t have had the Palestinian army here if you didn’t have the expulsion of Palestinians from Palestine.

TRABOULSI: Of course. And their expulsion from Jordan, and the mere fact that you had, in 1965, the Palestinian people deciding themselves to take upon themselves the liberation of their country, which will become very important just after the defeat of the Arab armies in 1967. So that was an [inaudible] The other is the privileges, the political privileges, at least, given in the sectarian system to Christians in general, which doesn’t mean that every Christian benefited [inaudible] these were the Christian elite, in a very presidential system, which was not accountable. So that [inaudible] Third is what Iï¿½and I’m emphasizing, and that is the social crisis, which was absolutely unreserved and unmet in any way. So, I mean, if you want to ask the bizarre questions about history, I mean, had there been real reforms and an attempt to accept the fact that the Palestinians have rights to carry on operations for Lebanese territory, I’m not sure that [inaudible] would have been the only issue. So war, you know, it was a choice. It was not a dire necessity. It was the product of those three things, dealing with the Palestinian presence as a security, sovereignty challenge rather than attempting to organize it.

JAY: And this is partly because the PLO and the Palestinian militancy had allied itself with some of the more left and progressive social forces in the country?

TRABOULSI: Actually, the first year or two of the crisis, the PLO leadership was not keen to do this. What appeared more was the left, the left alliance, a huge alliance of parties nationalist, socialist, and Marxist, communist, was pressing for an end of the sectarian system and moderate economic reforms. I mean, that was a time where, I mean, right wing was mainly targeting the left as being the enemy. Gradually they started shifting to considering Palestinian presence as the threat. Of course, you shouldn’t reduce the external factors. Mr. Kissinger had this theory that there is, of course, peace coming into the steps that will lead to the Camp David Agreement, and he had that famous saying that there is no place for the Palestinians in the coming peace settlement. So the Lebanese right wing considered that as a signal that, you know, you should get rid not only of the Palestinian militants but, if you can, of the Palestinian civilians, right, which they will try in 1982 in Sabra, in the massacre. So directly now we enter the role of the United States, and the Lebanese crisis is more complicated now when it enters the American pax Americana. So that was a very important element. Now, I mean, it was used in a rather interesting way by the right wing, by saying that the Palestinians want to settle down permanently on Lebanese territory and that is a threat to the Lebanese balance of sectarian power, because they are, of course, in the majority Muslims. And this is, if you want, the mythological representation of this idea. But there was a clear relationship between the peace process, the beginning of that peace process, and this idea that something should be done about the PLOï¿½the PLO should be disarmed, the PLO should be dissolved, what have you. And the people were convinced that they could try and do it here.

JAY: All of this going on inside Lebanon is taking place in the context of Israel, Syria, but even more, the whole Cold Warï¿½the Soviet Union and the United States. So everything that happens is another chess piece in the Cold War. So how does the Cold War politics affect what’s going on in Lebanon at this time?

TRABOULSI: Yeah, this is a very interesting question. I’ve always asked about it. And it does operate in a very strangeï¿½indirectly, because Mr. Kissinger had this idea that if you want to get rid of the PLO, you should get rid of the PLO through another party and not Israel. So by the end of 1975, he is helping and convincing Syria to intervene politically in Lebanon. Syria is invited by the president, tries to mediate a solution politically. Syrian officials are in Beirut. Actually, the left refuses an attempt to reform the sectarian system by simply juggling the centers of power within it, reducing the powers of the president in favor of the prime minister, emphasizing that we need a secularized, democratic system, which went against all the Syrian attempts to solve the problem. Now, the second step is Syrian military intervention. Now, Syrian military intervention is brokered. We have the documents now. Mister Kissinger says it in his memoirs. He had this brilliant idea of convincing President Assad that if you don’t intervene in Lebanon, the Israelis will intervene. And once President Assad decides to intervene, the American administration undergoes indirect negotiations about the modalities of Syrian intervention. This is where the kind of armament is discussed, how many troopsï¿½30,000 troops, that’s not [inaudible] Where would they be deployed? They should not go beyond the South, Nabatieh. And what kind of missiles? What have you. So you have all this seeming secret negotiations now are known because they’re in the archives of the State Department, where you can look at it.

JAY: Now, what’s the US interest to bring in Syria? I thought Syria was a little bit more on the Soviet side, on the Syria [sic].

TRABOULSI: This is what Mr. Kissinger considered his bigger victory. Not only that, but, I mean, Mr. Assad invited Mr. Kosygin, the Soviet prime minister, to Damascus on the day that he declared that his army has entered Lebanon. So if you read Mr. Kissinger’s diaries, you would consider he would consider this all of the big, I mean, let’s say, jokes that he played on the Soviets. The Soviets are quite angry but can’t do much between the PLO and Syria. They don’t want to simply sabotage all their relations with the civilian government. So they are in a very, very embarrassed situation.

JAY: The target here is the PLO, in the final analysis?

TRABOULSI: Definitely. The idea is the civilian army is the only army that can put an end to the war. But, of course, it enters a vision by President Assad that, in all fairness, one should say. President Assad in 1973 had joined President Sadat, in October 1973. President Sadat, rather than continue the advance of his troops, stopped and decided, now let’s negotiate, which allowed the Israeli army to make a roundabout and enter Egyptian territory, led by the famous Ariel Sharon. And the whole effect of surprise that the Syrian and Egyptian armies had against the Israeli army simply was reduced, let’s say. And so Mr. Kissinger considered that this was an army to activate the peace process. Now, the peace process is undergone by President Sadat alone, who [inaudible] who leaves his ally, President Assad. Now, President Assad had this idea that to compensate for the loss of President Sadat, the thing to do is to join four peoples and three countries under his leadershipï¿½Syria, Lebanon, Jordan, and the Palestinians. So entering Lebanon for him meant that now you have three of the four parties [inaudible]

JAY: And what year is this?

TRABOULSI: That was ’76, April onwards, the spring of 1976. To help Mr. Kissinger, Mr. Dean Brown was sent to Lebanon as an envoy, as a presidential envoy, to convince the Lebanese from the alliance of right-wing Christian parties to accept Syrian intervention, military intervention, and he will succeed, and the Phalangist Party, very jealous of Lebanese sovereignty, but was willing to accept 30,000 troops on its territory in the hope that they will disarm and control the Palestinian fighters.

JAY: And at the time, if I understand correctly, Syria had previously been more allied with the Muslim forces, but now allies with the Christian forces. And everybody turns their attention to the Palestinians.