Traboulsi: Palestinian refugees in Lebanon are not allowed in most professions, denied many civil rights

Traboulsi: Palestinian refugees in Lebanon are not allowed in most professions, denied many civil rights 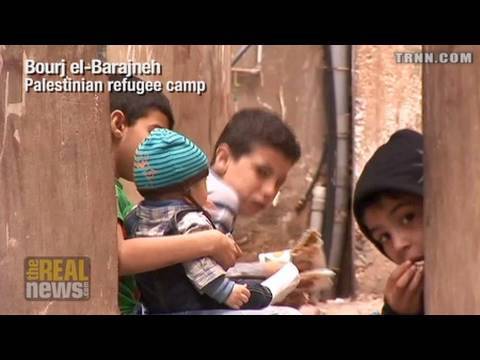 JAY: So in the midst of all the very complicated politics of Lebanon and Hezbollah and the bankers, who—in the United States they’re calling them now the banksters, and you could probably use the same term here—

TRABOULSI: Well, first, why they’re there is those are mainly the inhabitants of northern Palestine who were evicted from their homes in 1948. They were dispersed by government decision in 1948 over all the Lebanese territory rather than be concentrated.

TRABOULSI: The government of 1948, 1950, the first independence government, actually, because they came in waves to the south of Lebanon, and then they were distributed by the Lebanese government, of course, strategically, to serve mainly industry and agriculture—on the coastal plain for the citrus trees, and around the cities where they were cheap industrial labor. What we’re talking about now is the post-1990 situation. You needed a scapegoat for the war, because what happened is that the only partner which was not participating in the peace process were the Palestinians, since they had been evicted in 1982. But you had the whole ideology, a whole myth that the Lebanese would not kill each other and that the war was the war of others, which is one way of—one holy way of [exculpating] the Lebanese from any responsibility for killing each other, despite the fact that, I mean, we had 120,000 victims in that war. So that other was more and more covertly implied to be the Palestinian. And hence the corollary to this was this idea that initially the war started because the Palestinians wanted to establish Lebanon as their permanent homeland, which of course is pointless since all Palestinians’ dear aim was to go back to their country. But that was the official position. So, I mean, there’s a lot to say about memory, amnesia, how there was forced amnesia after the war. You don’t speak about the war. There are two or three formulae about the war. That’s it. War of others, unfortunately. There was a semi-consensus on this, which is one mythical way of uniting the Lebanese symbolically around somebody or some victim, and that was mainly the Palestinian. Now, the Syrian mandate encouraged this, and the idea went back to this formula that the camps should not be given any rights or service because we should keep them in that situation so that they would always want to go back and not settle down permanently. There were much more complicated ways in which Syrian government was very interested in having Palestinian camps armed, so that they can use them as a negotiating chip with the Israelis. So there’s a question who would disarm the Palestinians. So they were rearmed again, because the Syrian vision was that it controls the possibility of bringing Lebanon into any peace negotiations with Israel, which meant who would control Hezbollah, who would control the Palestinian armed organizations outside the camps, who would control the camps. So there was [inaudible] this added dimension, also complicated by the split between Fatah and Hamas, which amounted to a really catastrophic situation within the camps, since the Lebanese army controlled entrance to the camps, and there was this very strange idea that no building materials should be brought into the camps, so that the camp dwellers would not build houses and stay in shacks, so that they will—. Of course, now it’s much less than before, but definitely the majority of the political parties of both sides are not hot about the idea of civil rights for the Palestinians.

JAY: Just to be clear, what rights don’t they have?

TRABOULSI: Well, the first thing, to start with, is that we have at least 250,000 to 300,000 Palestinians who’ve been here for more than 50 years. They have the right to residence, to start with. They’re not considered residents. They have special passes. So people like me who support civil rights would start with the idea that the right of residence—which can be added to the right to have a Palestinian passport from the Palestinian Authority. Now, the real nasty play is confusing tawteen, which is a very vague term, permanent settlement, with naturalization. Nobody’s calling for the naturalization, least of all the Palestinians themselves.

JAY: That’s often the argument why there’s no civil rights, because it would destroy the delicate balance of the various sects, ’cause there’d be all these new Muslims and new Sunnis.

TRABOULSI: This is why I’m always referring to those things as mythical, as political myths, since nobody’s calling for naturalization. Everybody’s—I mean, not many people, but a few people are calling for just civil rights, which means the right of residence, the right to be employed in many jobs.

JAY: And I think there’s 72 professions Palestinians are not allowed to enter, including engineering and being doctors and other things.

TRABOULSI: Now, look, I mean, this is part of the initial French influence, certain professions that are only for the locals, taken over from old mandate times. Now, it was not applied for years. It was reapplied after 1990. I mean, it existed, but it was not applied. Now it’s being reapplied. Of course, I mean, I can’t say it’s racist, because we belong to the same race, but, I mean, it’s a very discriminatory way of dealing, especially at a time where Syrian workers have all the rights and they’re more numerous than the Palestinians. It doesn’t mean that the Palestinian refugees don’t work, which is worse: because there’s the ban, you work without any guarantees.

JAY: Except a guarantee of a pool of cheap labor.

TRABOULSI: Absolutely, which means you are the cheapest labor, you are the least secure in your job, because you’re not a legal [worker], whereas Syrian workers have been legalized. Now, one very negative result is that this is pushing many young Palestinians to leave the country. Actually, there is also—to add discrimination, there is also this law that once you leave the country you can’t come back.

JAY: Which is for Palestinians.

TRABOULSI: Yeah, for Palestinians, of course. So I must say, I mean, this is one of the things that one does not feel any—proud of being Lebanese in this situation.

JAY: Is Hezbollah’s position any different?

TRABOULSI: Not good, not good. Of course, Hezbollah has within it people who have fought in the camps. Hezbollah—actually, the main ally of Hezbollah is the most racist in all this, which is the Aounists. This is where you have—

TRABOULSI: —people, MPs calling for the eviction of the Palestinians. General Aoun himself had talked about internationalizing the refugee problem and asked the United States to take the Lebanese refugees to the United States. Hezbollah has not been [inaudible] fantastic about it. Recently, recently, just after their last congress, they started talking about civil rights. But until now, as far as I know, they haven’t done anything about it.

JAY: So the Palestinians remain wonderful symbols, but in fact victims of [inaudible]

TRABOULSI: Ah, but this is, of course, the hypocrisy about it. Everybody loves Palestine. Everybody wants the liberation of Palestine. Lebanon is very radical concerning all the solutions of the Lebanese problem. The Lebanese elite does not want recognition of the state of Israel. But nobody cares about 300,000 Palestinians in Lebanon.

JAY: Thank you for joining us on The Real News Network