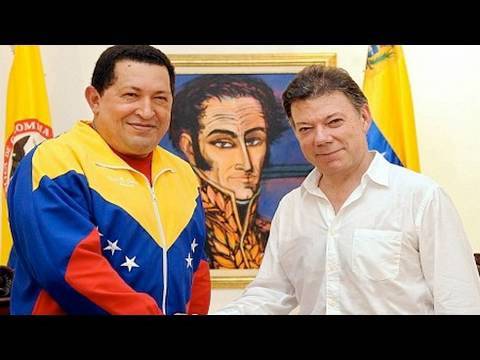 PAUL JAY, SENIOR EDITOR, TRNN: Welcome to The Real News Network. I’m Paul Jay in Washington. In Colombia, the new president, Juan Manuel Santos, has done something that seems quite unexpected: he made peace with Venezuela. In fact, he ran much of his election campaign only a few weeks ago with one of the main planks being how he was going to be tougher with Venezuela, with all kinds of rhetoric against Hugo Chávez, the president there. Now the two have met, and they seem to have reconciled. Now joining us to make some sense out of all this drama is Forrest Hylton. He joins us from Bogotá, Colombia, where he teaches at the university there. Thanks for joining us, Forrest.

PROF. FORREST HYLTON, UNIVERSITY OF THE ANDES, BOGOTÁ: Good to be here, Paul.

JAY: So Santos used to be the minister of defense, and at the time, he was involved in a scandal with what they call the "false positives", where they were apparently killing ordinary peasants and dressing them up as FARC soldiers so that they could up their body count. Of course, he denies being involved in that. But at any rate, his election campaign was tons of anti-Chávez rhetoric, and now he’s made peace. So what’s going on there?

HYLTON: Well, in many ways I would say that Santos has shifted postures from looking a little bit like McCain on the campaign trail. Now that he’s in office, he’s made many Obama-like [inaudible] He’s managed [inaudible] coalition that accounts for 80 percent of Congress, and he’s brought almost all of his kind of rivals and opponents into his cabinet, and some of them in very important ministerial positions. So he looks to be ruling with a consensus that not even Álvaro Uribe had. He has also adopted a much more conciliatory posture towards Venezuela and is really, right now, the man of the hour, as someone who has put down the basis for what could be a lasting peace between these two countries.

JAY: So in the weeks before Uribe left power, he upped the rhetoric against Venezuela, charging Venezuela with harboring FARC rebels and so on. It reached such a point that Venezuela broke off diplomatic relations with Colombia. So is there a bit of a "good cop, bad cop" going on here, with Uribe playing "bad cop" and setting up the conditions for Santos to come in looking like a diplomat?

HYLTON: Well, it’s interesting. The Colombian government used the Organization of American States—it called an extraordinary session in order to launch these charges against Venezuela, claiming that Venezuela harbors FARC and ELN insurgents in its territories, somewhere on the order of 1,500 or 2,000. Obviously, after 2001 it’s extremely dangerous for any country to be labeled as harboring terrorists, as Venezuela was at that meeting. Lula expressed his surprise at that announcement. He thought the timing of it was very strange, because apparently back-channel diplomacy with the incoming administration of Juan Manuel Santos had been going quite well between Venezuela and the incoming Santos administration. So it looked like an obstacle that had been placed [inaudible] road toward the improvement of diplomatic relations between Colombia and Venezuela, and Juan Manuel Santos was able to resolve it. What’s interesting, though, is that it was really UNASUR that took the lead in resolving this crisis, as it has taken the lead in resolving regional diplomatic crises in recent years.

JAY: Explain to our viewers what UNASUR is.

HYLTON: UNASUR is the regional diplomatic association of the South American republics that has taken on an ever-increasing role in regional diplomacy, particularly as Brazil has thrown its weight behind this new regional diplomatic organization, in order to counteract the more US-influenced Organization of American States, which on both the issue of Honduras and the coup in Honduras, as well as the issue of these accusations launched against the Venezuelan government—which, by the way, the Colombian government retracted. The Colombian government retracted its request for independent international verification of whether Venezuela is harboring Colombian insurgents on its soil. Now, what’s interesting is that the United States immediately backed Colombia’s claim that Venezuela was harboring insurgents, as soon as it was launched in the Organization of American States on July 22. Many of Washington’s right-wing allies in the hemisphere either issued statements of neutrality, as in the case of Chile, or simply declined to pronounce on the issue, which is to say, they kept their distance from these accusations. And countries like Brazil clearly looked for an immediate resolution to the diplomatic crisis, which they found through UNASUR rather than the OAS. So Philip Crowley, the spokesperson for the US State Department, commented on the positive role that former Argentine president and current secretary general of UNASUR Néstor Kirchner had played in repairing Colombian and Venezuelan relations. So in fact the US State Department itself has officially admitted that Brazilian diplomats, essentially, and other diplomats from around the region, were able to make an end run around the United States and Colombia, around the OAS, through UNASUR. So that’s happened in Honduras previously; that’s happened with respect to Colombian military bases, where all other South American countries came to an agreement that such bases would not be permitted on their soil; and that also happened previously with the massacre of innocent people in Bolivia in 2008, which was carried out by the opposition to Evo Morales’s government. So that’s several times, three or four, in fact, that UNASUR has been tested in regional diplomatic crises and has come out ahead of the United States in terms of finding effective resolutions to them.

JAY: Now for Santos to say—withdraw the claim that FARC bases are being defended in or harbored in Venezuela is an enormous split with the propaganda machine that the US has had towards Venezuela. I mean, are we seeing a bit of a split on the US side? In other words, is there a section of the State Department that has the campaign going against Chávez, and another one that seems to want to integrate Santos more into Latin America? Or is this just a straight split with the US?

HYLTON: Well, it looks to me like a bit of a split with the US. I don’t think that Santos fears any consequences from this. On the other hand, at 5:30 this morning, a car bomb went off near the city’s financial district. It’s not clear who was behind the attack, but some are speculating that it’s people who are opposed to the type of peace that Juan Manuel Santos has been able to establish with Chávez, which has a clear agenda for the future: five bilateral commissions. The first high-level diplomatic meetings will take place in Caracas on August 20. It appears that there may be ultra-right-wing sectors who are opposed to this kind of rapprochement with Venezuela. The flip side of that is that Santos has also promised an agrarian reform, and he’s promised to give back some of the hundreds of thousands of acres that were stolen from peasants under the Uribe regime. And if in fact Santos is serious about carrying out such an agrarian reform—and he has named previous Colombian presidents, like Carlos Lleras Restrepo, who carried out an agrarian reform in the ’60s, as models that he intends to follow—if he’s serious about following such models and carrying out an agrarian reform, particularly in relation to lands that had been stolen, then he would be touching some very powerful interests in the region, and those interests tend to be ultra-right-wing as well. So there may be this type of opposition to Santos on the far right. On the other hand, Santos does have 80 percent of the Congress in his favor, and it’s clear that he’s going to be able to pass most of the bills that he wishes to pass. And as I said, he’s been able to draw many opposition figures—or not opposition; I don’t mean opposition from the left. But people on the right and the center-left who might have been opposed to Santos have been integrated into his government. So he’s ruling with a very, very broad consensus. And what’s notable about the left wing opposition is the extent that it is divided and weak in the face of Santos’s new regime.

JAY: It sounds very surprising, based on what we understood of his campaign. Is this as surprising inside Colombia as it seems to be from the outside?

HYLTON: Well, what people do know about Santos is that he is a consummate insider and he has a long history of occupying ministerial posts and forging very good ties with different economic groups, as well as the military when he was minister of defense between 2006 and 2009. It should be mentioned that when he was minister of defense, Colombia bombed Ecuadorian territory on March 1, 2008, and in that crisis, there was a very similar dynamic: UNASUR really took the lead in opposing those types of actions in South America. And to some extent it’s not only a rapprochement with Chávez and Venezuela; it’s also a rapprochement with Brazil and Argentina and the rest of the countries that are grouped into UNASUR. So Santos clearly has fulfilled expectations that he would move Colombia in a direction of closer integration with its neighbors in South America, as opposed to the exclusive reliance upon and dependence upon the United States—precisely the kind of maneuver that we saw on July 26 in the Organization of American States, launching the accusations against Venezuela. It’s clear that retracting those accusations, insofar as Colombia is no longer calling for an international commission to verify whether Venezuela’s harboring terrorists, represents a clear cooling of the temperature and an important diplomatic victory for Santos right out of the gate.

JAY: Thanks very much for joining us, Forrest.