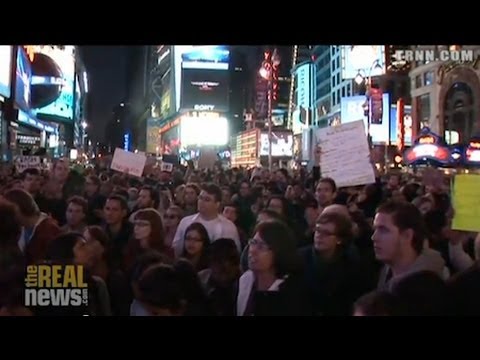 JAISAL NOOR, JOURNALIST: On October 15, hundreds of thousands of people answered the Occupy movement’s call for a global day of action, demonstrators demanding an end to the concentration of economic and political power and austerity measures targeting the most needy, while calling for better living conditions for all. Protests were held in hundreds of cities and dozens of countries around the world, including Amman, Jordan; London, England; Frankfurt, Germany; Madrid, Spain; Sydney and Melbourne, Australia; Taipei, China; Santiago, Chile; Manila, Philippines; Tokyo, Japan; and Cape Town, South Africa. In one of the day’s largest actions, over 100,000 people gathered in Rome, where breakaway groups battled police. One dozen people were arrested. In the United States, actions were held in dozens of cities. Hundreds were arrested over the weekend in cities such as Chicago, Tucson, Phoenix, Boston, Denver, and Washington, DC. In New York, the epicenter of this latest wave of global protests, tens of thousands took to the streets as the Occupy Wall Street encampment entered its second month. Once again the New York Police Department responded with a heavy hand and mass arrests. Two dozen were arrested as they attempted to withdraw money from bank accounts at Citibank, including two individuals who left the office at the request of Citibank employees but were forcibly taken back inside by police.

Shame. You should be–.

NOOR: In the evening, when marchers took over world famous Times Square, police on horseback were unleashed on the crowds. By the time the marchers returned to the Wall Street encampment, nearly 100 had been arrested. Despite the police violence, the protesters remained peaceful. The Real News spoke to a few of the thousands who took part in the march. Here are some of their voices.

PAUL, BROOKLYN RESIDENT: I’m Paul and I’m from Brooklyn. I’m here today because of the–everything that’s going on in America, all the different friends I have who are not working at this particular time, and everything that’s been going on. It’s the same game. It doesn’t change. And that’s why we’re here. We want to change the game. That’s it.

KAFUNIA, BROOKLYN RESIDENT: My name is Kafunia, and I live in Brooklyn. Well, what I think is going on is a great thing, because we are the 99 percent. Why should government keep on bailing out bankers? You know. We have built this country. You know. And it’s our streets, and they can’t stop us from protesting. It’s our right. And let the corporate greediness end. Thank you.

TED ALEXANDRO, ASTORIA RESIDENT: Hi, my name is Ted Alexandro. I’m from Astoria, New York. And my sign says "Wall Street has the real weapons of mass destruction". And it refers to the corporate policies that have really caused mass destruction across not only the United States, but across the globe, where people are foreclosed upon, people can’t find work, children are in poverty. And that trend has got to stop, the disparity between rich and poor. These things have to be addressed, and that’s why I’m here, that’s why we’re all here. I’ve been participating for the last month, but today is particularly special ’cause the march came from Washington Square up to Times Square. So it’s growing, and that’s a good thing. Occupy everywhere.

I’m here to support the cause of economic justice for people, for future generations. I want to–I’m a child of the ’60s. I want to learn from the young people here and teach them and protect them any way possible. And I think the basic justice in this instance is almost a matter of arithmetic, you know, what’s fair. And I’m also very happy that this is a movement that goes worldwide, because that’s where we have to be. We’re on this earth. Thank you.

CARLA VILLA, BROOKLYN RESIDENT: My name’s Carla Villa. I’m from Brooklyn. I’m here because I think that we need a lot of change in our country, and I think that the majority of the people want the change. But it’s not until this movement started when it’s really sort of seemed possible to the rest of us. My sign says on one side, "Arrest count: thousands of protesters, zero bankers." And if I can, can I show you the other side? So it’s "Get off the Internet. I’ll meet you in the streets."

RAY: I’m Ray. I’m 15. And I’m here because I believe that the system in which we live is flawed and we need a new one. So I can’t vote yet, so I got this.

TRNN: And what is the message here today?

CROWD: We’ve got Wall Street to defeat, at the shops, in the streets!