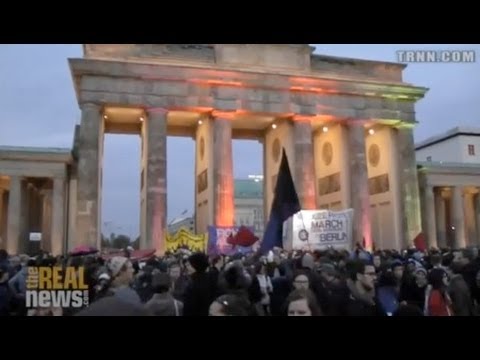 NARRATOR: On Saturday the 13th, refugees from detention centers all over Germany converged on the Oranienplatz in Berlin to demonstrate. The refugees demand full human rights as their asylum applications are being processed.

The tenant activists from the Kotbusser Tor Square were among the thousands who joined the refugeesâ€™ demonstration.

Several thousand people assembled at the Oranienplatz. The mood was lively and militant.

â€˜Refugees are people who are fighter,

Everywhere you go, you can hear them say,

Refugees are people who are fighter!â€™

Chants from the demonstration:

â€˜We are here, and we will fight!

Freedom of movement is everybodyâ€™s right!â€™

â€˜No one is illegal! Right to stay, everywhere!â€™

Egbo Chigozie, one of the refugee activists, explained his situation and his demands.

So many people try to commit suicide, at the detention center. Itâ€™s not nice!

Germany is one of the countries that are rich, that have everything. Without Germany, there is no Europe. So I donâ€™t see why we should be suffering like this. A lot of people are trying to commit suicide. In my own detention center, there were two in the last three weeks. One took a knife and stabbed himself in the stomach. They rushed him to the hospital, to the clinic. After that another boy took some drugs, and tried to kill himself. That is after one week. In the second week, another person. So I donâ€™t see the reason why they keep us in a place where we canâ€™t work. People outside think that we donâ€™t want to work, that we just live on peopleâ€™s tax, which is not true! We have the power to work, we can work, we can pay tax. If they give us our right to work, we can work and pay tax for them. Thatâ€™s why you see a lot of people trying to kill themselves. In Wolfsburg, somebody jumped from the window, and killed himself. Why? Because we are tied to one place. We are fingerprinted everywhere. Why the passport, this, police brutalizing us everywhere. In the detention center, you see police every minute, every hour. Why? We should have every other right that everyone else has. Yet we donâ€™t have it. Itâ€™s not nice!

PATROS BIWANSI: For me, according to my understanding, it is nothing. But, on the other hand, it is a good improvement, but the solution is, we want the right to work, that would be the best solution. We are not going to quit our protest until the Federal Republic of Germany hears our demands. The Federal Republic of Germany must know that we have problems. Thatâ€™s why we are here. And it must stop corrupting our home countries, our poor countries, our underdeveloped countries, which are not poor.

â€˜Refugees are people who are fighter,

Everywhere you go, you can hear them say,

Refugees are people who are fighter!â€™

Chant from the demonstration:

â€˜No one is illegal! Right to stay, everywhere!â€™

All these structures, ostracism, segregation, are part of the culture and class struggle, and should be abolished! To make economic and social inclusion, participation in the life of society possible, so that people can actually use their potential!

Genocide never expires, nobody is illegal, racism is a weapon, and our weapon is solidarity!

After Saturdayâ€™s demonstration, the actions continue. On Monday the fifteenth, refugees tried to occupy the Nigerian embassy, in protest of Nigeriaâ€™s collaboration with Germanyâ€™s deportations. The police forcibly removed the occupiers and detained several of them.