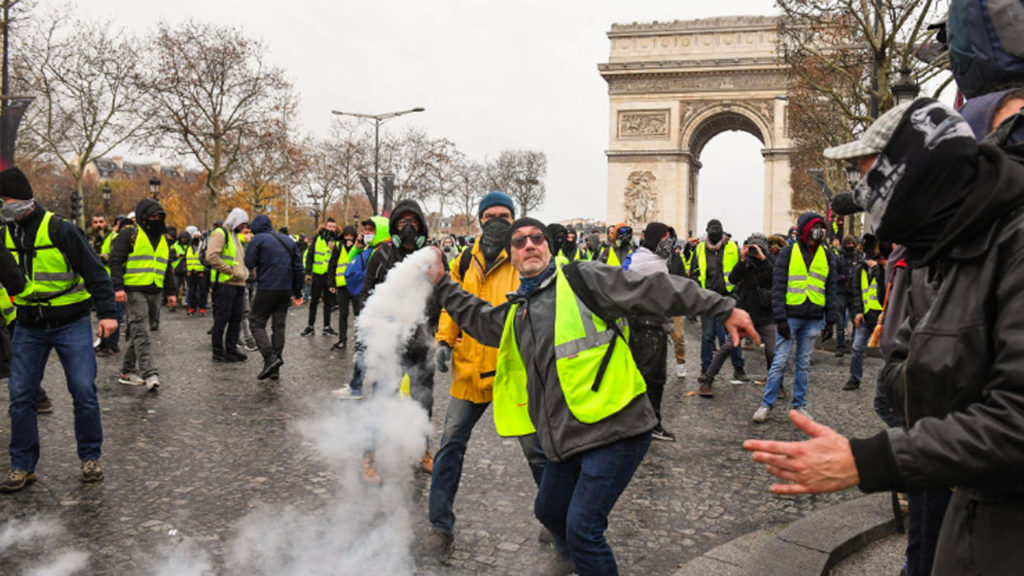 GREG WILPERT: France is on edge as the so-called “Yellow Vest” movement is continuing its nation-wide protests for a fourth consecutive week. This past Saturday, over 100,000 took to the streets in Paris and throughout the country to protest against the neoliberal government of President Emmanuel Macron. The last two Saturdays, though, the protests took a turn towards vandalism and street fights, when police intervened with massive tear gas volleys and water cannons, and some protesters smashed storefronts and set cars on fire. Over 1,200 protesters were arrested in the most recent action, and over 100 protesters and 17 police officers were injured, with over $4 million dollars in property damage, according to France’s interior minister.

The yellow vest protests began on November 17, apparently rather spontaneously, in reaction to the Macron government’s decision to raise gasoline taxes by as much as 25 cents per gallon, beginning on January 1 next year. This would have raised gasoline to about 1.59 Euros per liter, or to about $6 per gallon. Yellow vest protesters say this is an unbearable price increase, and called on anyone who agrees to take to the street wearing the yellow emergency vests that all cars in France are required to carry as part of an emergency kit. Initially the protests mobilized nearly 300,000. Since then the number of demonstrators have declined each week, but the militancy of the protests seems to have intensified.

Following the third Saturday protest on December 1, President Macron announced that he would temporarily suspend the gas tax increase and that electricity prices would be frozen for the winter. This, however, did not appease the yellow vests, who now say they want President Macron to resign and vowed to continue the weekly protests until he leaves office.

PROTESTER: The feeling is that this is, above all, a peaceful demonstration. To continue this action peacefully, what we want is a change of government. That’s something we can agree on. Most people, everyone, wants that. We don’t want them anymore. They’re no longer credible; it’s impossible. Here we are now and, as you can see, we’re peaceful, and they’re gassing us.

GREG WILPERT: The Macron government initially tried to dismiss the protests, saying that they were organized by the far right. Also, many sectors of the French left have been very suspicious of who is involved in the protests and who organized them. Although there is little doubt that supporters of France’s far-right and anti-immigrant National Rally party, led by Marine Le Pen, have been actively involved in the protests, it is becoming increasingly clear that the participants are politically very diverse.

JEAN BRICMONT: It’s certainly an unstructured movement. There’s no, you know, they don’t police their own movement, they can’t expel people from the movement. Anybody can put a yellow vest. Of course there’s been far-right people there. But I don’t think it has anything to do with the far right as we know it in other countries. In fact, it is to be credited to the French that this movement is largely French and Republican.

COLE STANGLER: It was organized without the support of unions and political parties at the very beginning. Unions and parties have now endorsed the protest, to varying degrees. Every major political party officially supported, with the exception of the Greens, officially supported that call for scrapping the fuel tax. But it’s important to note these parties and unions were not at the foundation of this movement. It really started on social media. It started as a grassroots movement of people that were really upset about this question of the fuel tax.

GREG WILPERT: It is tempting to see the yellow vest protests as a specific reaction to a specific policy – the gas tax increase – but most analysts seem to agree that it goes far beyond this policy. Rather, the gas tax was just the latest policy in a whole series in which France has been gradually dismantling the welfare state by defunding its national healthcare system, school system, and rail system. These cuts have been hitting rural and semi-urban populations far harder than the major cities, which is why most yellow vest protesters come from these areas.

GREG WILPERT: President Macron, though, has tried to present the yellow vest protests as being anti-ecological, since the gas tax is supposed to decrease gas use and to bring about a shift towards renewable energy in France.

EMMANUEL MACRON: You can’t be for the environment on Monday and against the fuel price rises on Tuesday. You can’t decide on a carbon tax a few years ago, and then denounce the cost of fuel today. May I remind you that this tax was voted in 2009, 2014, 2015, committing political figures of various persuasions to it.

GREG WILPERT: Protesters, though, respond that not only is the gas tax not earmarked for expanding the renewable energy sector, but it hits people hard who must use their cars on a daily basis and have no alternative for getting to work, or who use their cars for work.

JEAN BRICMONT: I did not expect the level of misery that I hear in the testimonies of people saying they can’t make ends meet, they don’t have anything to eat after the 20th or the 25th of the month. People describing the situation in the hospital, which used to be one of the best medical systems in the world, being absolutely dramatic. Waiting lines. You know, I mean, all these things, I mean, just unbelievable how much France seems to be being destroyed.

GREG WILPERT: Meanwhile, some of France’s political parties are beginning to recognize the importance of the yellow vest movement and are trying to get in on the action. The far-right National Rally party of Marine Le Pen, as well as the leftist France Unbowed party of Jean-Luc Melenchon, are expressing support for the protests.

MARINE LE PEN: I call once again on the president of the Republic to take into account the suffering that has been expressed, to provide a response, to leave the presidential palace, and to stop stonewalling and locking himself into the Elysee Palace.

JEAN-LUC MELANCHON: What happy days we live in today, because finally France has entered a time of general non-submission to an unjust order that has lasted for too long.

GREG WILPERT: Also, various sectors of France, such as the pro-communist party’s union federation, the CGT, and various student groups are calling for strikes and protests against the government now. Even one of France’s typically very conservative police unions is expressing support.

Exactly where all of this will lead is very uncertain. President Macron made a major announcement on Monday, promising an increase in the minimum wage and tax reductions for pensioners and for overtime work. His minister of the interior warned that the protests will negatively impact France’s fragile economic growth. It is clear that France’s working class and lower middle class has been suffering significantly from the dismantling of the welfare state and the imposition of neoliberalism. However, no coherent organized movement has yet managed to lead the discontent towards real political change.

PROTESTER: We’re discussing amongst ourselves to find a solution, because we don’t have a leader yet. But there needs to be a leader to end this crisis. We have to find a leader.