Firoze Manji: Nothing in international law allows regime change and assassination of a leader

Firoze Manji: Nothing in international law allows regime change and assassination of a leader 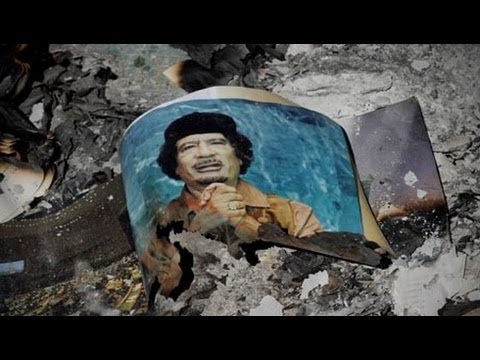 PAUL JAY, SENIOR EDITOR, TRNN: Welcome to The Real News Network. I’m Paul Jay in Washington. On the 18th, Hillary Clinton was in Tripoli, Libya, and according to AP, said in unusually blunt terms, according to AP, that the United States would like to see Muammar Gaddafi dead. Well, two days later they got their wish. Muammar Gaddafi was apparently assassinated, murdered, as his convoy was somewhere around Sirte, and perhaps bombed, we think, by NATO planes, and then shot, apparently, by national transitional government forces. Now joining us from London to talk about the significance of Gaddafi’s death is Firoze Manji. Firoze is editor-in-chief of Pambazuka News, and he joins us from London. Thanks for joining us, Firoze.

FIROZE MANJI, EDITOR-IN-CHIEF, PAMBAZUKA NEWS: Nice to be on your show again.

JAY: So, first of all, what do we know so far about what happened?

MANJI: Well, it seems to me that what you describe was quite right, that NATO forces were–had bombed his convoy, and he was therefore captured. And according to pictures on the BBC website, he was shot with a golden gun. This was extrajudicial killing, and supported by Hillary Clinton. It’s very unfortunate. But the issue, I think, in Libya today is not so much about Gaddafi, but that this symbolizes the final occupation, the recolonization of Libya by the US and NATO forces. It is now a question of the US government and the Europeans taking hold of Libya and doing with it what it wants. It has access to not only its oil and gas reserves, but something that the media doesn’t really cover very often, and that is the huge, huge water resources under the Libyan soil.

JAY: Firoze, before we get into that–and we will–let’s just back up one step. In terms of any kind of international law, it seems to me there’s no rationale for, or no excuse for what happened here at all. Whatever one makes of the original reasons for the UN resolution, the assassination of a leader of a country and his overthrow had nothing to do with protecting civilians. So, I mean, what does this mean? Is this, like, a final nail in the coffin that there is such a thing as international law today?

MANJI: I think it’s a blunt admission by the US that this was about regime change and not about protecting any civilians. It may have been that the initial excuse was one of protecting those in Benghazi who had real cause for fear. But in reality what this has been turned into, and a breach of the UN regulations, it is a regime-change operation. It is not so much the national transitional government which has been running it. It has been essentially a NATO and US operation.

JAY: Now, we did a story a couple of months ago, actually, about the difference or the contradiction between the French and the US on one side and the Italians and Russians on the other in terms of the scramble for Libyan oil. There was an oil deal. Eni was called, in a WikiLeaks piece, a stalking horse–Eni being the Italian oil company–a stalking horse for Gazprom. And the US wanted to block the Russians from getting Libyan oilfields. I mean, to what extent is this about Gaddafi wasn’t playing ball–. Or who wasn’t he playing ball with? Because to a large extent he was playing ball. On the other hand, what do they get now, except some–it seems, a very chaotic situation? So what does all this achieve for anybody?

MANJI: Well, indeed, I think it’s very good question. I mean, I think they have created a situation which is going to be continually chaotic. They are after–there is a competition for access to the very, very rich oil reserves and gas reserves in Libya. But, you know, it’s not unusual that there are inter-imperialist rivalries between the different factions of empire. But one thing is very clear: this is a very good demonstration that when it comes to the crunch, they are able to act together and act in solidarity. What we have seen is an imperial solidarity which has taken over Libya.

MANJI: Not at all. I mean, over five years ago, I mean, over eight–or maybe even longer than that, I mean, you know, he gave concessions to all kinds of US and European corporations. So, I mean, he was playing ball. But I think the one thing that does need to be stressed, I think that Gaddafi’s principal crime, at least in relation to how–from the perspective of empire, his major crime was that he refused to take any loans. He refused to have any debts. And, you know, you can’t be a part of the international club if you don’t get yourself in hock to the IMF and the World Bank and to the corporations. And he was very, very agile in preventing any attempt to make Libya take in–into debts. The second thing is that he refused to join the club of bankers and set up his own bank. Indeed, he had plans to set up a pan-African bank, which would then provide loans to African countries.

JAY: But for–there was an IMF report in 2010 on their general annual report on Libya that said he had agreed to a big privatization of Libyan banks. We just saw this report just a few months ago.

MANJI: Indeed. And so why invade and why knock him out? I think this is part of a strategy for the US to be able to establish AFRICOM in Africa. The reality is that apart from Liberia, none of the African countries have agreed to have AFRICOM troops, or at least their–recognized as AFRICOM, the USAFRICOM, Africa Command, which has been based until now in Stuttgart and apparently has offices now in Italy. But now it is quite clear that AFRICOM will move into Libya. There’s been [incompr.] opposition to AFRICOM doing that.

JAY: You think–what’s the evidence that? Because certainly the rebels have said they’re not going to let any of these troops on the ground. I mean, what evidence is there they will have AFRICOM [crosstalk]

MANJI: Well, let us see. I mean, we’re talking about something happening in the future, so your guess is as good as mine. I’m just using my knowledge of what AFRICOM strategy has been.

JAY: Because there’s a very weird alliance going on here, including in Libya. A lot of Islamists and others who are very–in principle very opposed to US policy in general, a kind of an unholy alliance, maybe, with France and the US here.

MANJI: Well, I think–you know, no, I think that will play out. But, I mean, we have to also set the context. I mean, you know, this is happening in a period where the European euro is about to disappear up its own orifice. I mean, the financial crisis that is–that Europe is on the brink of is extraordinary. It is, according to people like /[email protected]%[email protected]'min/, a crisis which is far, far deeper, far greater than that was experienced in the 1930s. And so this is the context in which it is happening. And the Germans are desperately trying to find a way to stop Greece imploding and taking the euro down. And France–the banks in France are all going under as well, and so they want to be bailed out. And so perhaps Libya provides some opportunity, but I think it’s probably too little too late by now.

MANJI: Well, I mean, Libya underground contains some of the largest aquifers known in Africa. I mean, they are massive, massive water sources. And this is going to be privatized. This is going to be providing a source of water not for Africa, not for agriculture, not for feeding people, which is actually, curiously, what was Gaddafi’s plan, but rather as a source of a commodity which will be speculated upon. And, you know, that’s the future that we face. And you were saying, you know, the kind of forces that have been liberated in Libya, I mean, the Islamists have never had any stronghold there, but they will now become quite a serious force. I’m not sure I agree with your characterization that the Islamists are necessarily opposed to the US. I mean, look at what’s happening in Egypt. The Muslim Brotherhood is cozying up to the US very well there.

JAY: But the particular players in Libya have a history of that. But I guess we’ll see. I mean, there’s–the actual players that are involved in the Islamist leadership, if I understand it, in Libya have a history of being part of even the struggle, the fight in Iraq and so on. I mean, all of this is very fluid and to be seen, but let’s just go back to the beginning and end with the first point, which is, whatever the situation is, it seems to be that there’s an open field or a green light on killing leaders these days.

MANJI: It seems so. And I think more seriously what we have open season on is that I think the US strategy is to benefit from creating destabilized states which are chaotic and allows–which means that there is no central government which can control anything. And we’ve seen this happen in Somalia. We’ve seen it happen in the DRC. We’ve seen it happening now in Libya. And I think, you know, that is part of a strategy to create destabilized situations, which allows, therefore, a justification for military intervention, as we’ve just seen in Uganda. And so–you know. And we are–we probably will see that happening and that spreading within Sudan, and unfortunately in South Sudan as well. So the future on that side doesn’t look good. But, Paul, let me just say, the other context is not just the eurozone disappearing, but the fact that we have 951 cities across the world where–in 86 countries, where there have been mass mobilizations and solidarity actions around the occupying of Wall Street. I mean, you know, this is extraordinary. This has never, ever happened before, and people organizing around the question of, you know, the 99 percent suffer and the 1 percent benefit. And I think, you know, we have to look at it in that context as well. And I think, you know, this is–in a sense, Libya’s paying the price for these mobilizations. So I think there’s hope, as well as some despair, in what is happening.

JAY: Thanks very much for joining us, Firoze.

Firoze, a Kenyan, is founder and executive director of Fahamu and editor of Pambazuka News. He has formerly worked as programme director for the International Secretariat of Amnesty International, CEO for Aga Khan Foundation UK, and regional representative for health for IDRC’s office for Eastern and Southern Africa.