Germany and Europe’s Path to the 19th Century

Crisis in the Eurozone 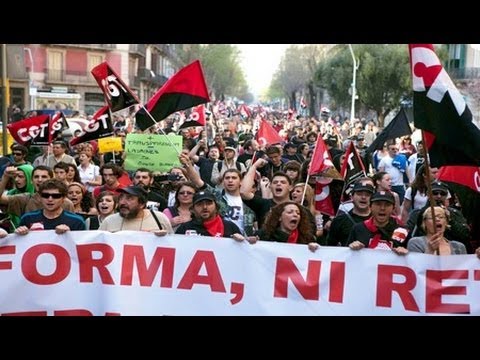 General strikes have taken place in Portugal and Spain against austerity measures. And many people suggest these austerity measures taking place throughout Europe are going to lead to years, perhaps a decade, of deep recession. Is this about lowering wages, undoing the social safety net, the social contract? But is it also about repaying banks in the short term? And what is driving this if in fact this leads to years and years of what many people are saying will be depression, not just recession? What is in the minds of these bankers?

Now joining us to talk about this is Francisco LouÃ§Ã£. He’s a professor of economics in Lisbon’s Higher Institute of Economics and Management. He’s at the Technical University of Lisbon. He’s been a member of the Portuguese Parliament since 1999. He’s the author of many books and scientific articles on economic thoughts, the dynamics of complex adaptive systems, and the nature of long-term techno-economic change. I can barely say all of that. Thanks for joining us, Francisco.

JAY: So get us into the brains of these bankers and political elite. I understand, as we’ve discussed in an earlier interview, there’s an objective here of lowering wages and undoing the social safety net, and they have this vision of lower-wage Europe makes it, quote-unquote, "more competitive". But how much of this strategy is also just about short-term repayment of banks and making sure that the bondholders’ interests are secured, and sort of damn the torpedoes, you know, aprÃ¨s moi le dÃ©luge? You know, if there’s a decade of depression, well, that ain’t going to hurt the banks so much, although one would think it would. What do you make ofâ€”what are they thinking?

LOUÃ‡Ãƒ: Well, I believe it’s both. They want to change the social regime in order to have very intense and very complex work paid with very low wages, with a system without social contract, meaning that we go back to the dark ages of the liberal labor market of the 19th century, no rules except the rule of the capital.

But there is, as well, as you say, a very short-term intent to get high profitability of financial investments. Indeed, what’s happening in Greece or in Portugal or in Spain or in France or in Italy is that a large part of the financial applications by banks and investment funds are being repaid by the European Central Bank, which takes the debts, the public debts, the sovereign debts of the countries and imposes this sort of policy-changing in different programs of austerity.

Now, you see that the effort of raising taxes, of increasing the price of electricity, of transport system, of health, of education is always leading to an increase of payment of interest rates, which is a totally artificial but brutal economy against common people. Let me state a very simple example which all the viewers can certainly understand. Imagine you have a debt of 100 and you pay what the public Portuguese debt or the public Spanish debt are forced to pay in financial markets nowadays. Well, in Portugal it amounts to 14 to 15 percent. If you have a debt of 100 and you pay such an interest rate, in five years your debt would be 200, and in eight years it would be 300, and in ten years it would be 400. Now, what do you owe? Do you owe 100, which you borrowed? Or do you owe 400 or more, according to the time and the interest rate? Of course you don’t owe 400. But that’s what’s happening with these countries. They are forced to impose austerity policies and to pay increasing taxes in order to pay a debt which for the large part does not exist. And the central bank is paying that debt to the banks in order to ensure they are protected to anything what will happen in these countries. And the countries will be in debt to the central bank, and the central bank will impose austerity plans in order to work more or to have more taxation in order to pay for that.

So it goes to a depression, you say. You are right. So this is a cruel economy and not a social economy or an economy devoted to people. That’s a new concept and a new life.

JAY: Is part of what’s happening here in Europe is sort of strategic repositioning of Europe in the global economy?

LOUÃ‡Ãƒ: What’s certainly true is that Germany, while imposing all those measures in all the countries in Europe, wants to change the institutional pattern of Europe and the political structure of the European Union, which was based in a difficult construction of consensus among different countries, because Europe is an economy as large as United States, more or less, but, of course, it’s many different nations. I don’t mean people speaking Spanish or Italian. I mean really the concept of a nation, the culture of a nation itself. So Europe does not recognize itself as a common country but as a political construction of different cultures and different countries with autonomy and democratic rule inside each one.

And now Germany wants to impose a general rule for all, which means a centralized political force, which is the German governmentâ€”Mrs. Merkel nowadaysâ€”ruling all over the different countries, what they call economic government, saying that all decisions on taxes, on investment, on monetary policy, on banking policies, on regulation, on electricity markets, and so on, that will be decided by the economic government, which is a central power, which is Germany. And that’s a changing of the game in Europe. And in that sense, yes, the German government wants the possibility of exports, but of highly qualified products which are competitive all over the world. I don’t believe they want to compete with lower wages. They want to have high-qualified training. But they want to have high-qualified engineers and scientists and workers with low wages if possible and with no contracts and with no social conflict. So they want a rule of violent capitalism with no social and democratic response. I think they are wrong on that, but we’ll see.

JAY: How realistic plan is all of this? ‘Cause, you know, just ’cause that’s what they want doesn’t mean it’s going to work. I mean, it seems to me what they’re going to give rise to is not just a decade of recession but a decade of popular uprising.

LOUÃ‡Ãƒ: Well, we’ll see. Democracy is strong enough and world trade unions and political parties, public opinion, universities, and different people are of course attentive to what’s this sort of plan. In institutional terms, the ruling of the German government goes very far nowadays. Europe is discussing a new treaty. Only Britain is excluded. And all the other countries are accepting imposing that even in the conditions of recession, the structural deficit of the government, of the public administration, cannot be higher than 0.5 percent. Can you imagine the United States and the recession of 2007 and ’08, ’09 spending less than zero-five percent in deficit, in government spending, when nowadays you have, what, 8 percent or 10 percent asâ€”with the plans of recapitalization and all the social investment and public investment against a recession? It’s not possible to have this sort. And yet it’s being imposed, not by a common decision of government, but by a binding treaty imposed on the constitutions, on constitutional laws of different countries. So, yes, the German government goes very far nowadays in institutional changes, and that’s very dangerous, because that will create conflict and that will impose a rule of destruction of the social conditions, of the health and education, Social Security, which are the three most important social systems in Europe and which are in danger now.

JAY: Thanks for joining us, Francisco.

Francisco Louca is a Professor of Economics in Lisbon’s Instituto Superior de Economia e Gestão (“Higher Institute of Economics and Management”), which belongs to the Technical University of Lisbon and a member of the Portuguese Parliament since 1999. He is also the author of several books and scientific articles[1] on the history of economic thought,…