One year after Israeli raid on Gaza aid flotilla, lawsuit and Dogan's father demand answers from US government

One year after Israeli raid on Gaza aid flotilla, lawsuit and Dogan's father demand answers from US government 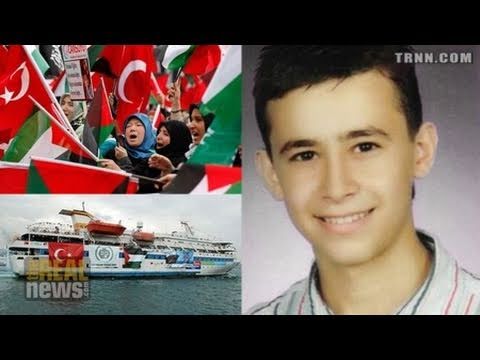 DAVID DOUGHERTY, TRNN: On May 31, 2010, Israeli commandos boarded six ships participating in the Gaza Freedom Flotilla in order to prevent them from breaking Israel’s blockade of Gaza Strip to deliver humanitarian supplies. Eight Turkish nationals and a Turkish American were killed in the operation, and the event sparked international outcry and severely strained Turkish-Israeli relations. A year later, many are still looking for answers not only from Israel, but also from its most important ally, the United States. As the powerful lobby group the American Israeli Public Affairs Committee, or AIPAC, held its annual policy conference in Washington, DC, the Center for Constitutional Rights announced the commencement of a Freedom of Information Act, or FOIA, lawsuit regarding the flotilla raid in hopes of learning more about any United States role or knowledge in the attack.

JESSICA LEE, UNIV. VIRGINIA INTL. HUMAN RIGHTS LAW CLINIC: This is a classic example of the need for court enforcement of FOIA provisions. Despite our requests, several government agencies have refused to turn over the necessary information. FOIA gives 20 days for agencies to turn over information. As my colleague mentioned, this has been over 11 months. Some of the agencies have failed to give reason why they’re not turning over information. Some have failed to give information. Others have stated that this information simply does not exist, despite several indications that it likely does. And this lack of information-sharing directly violates the spirit of our FOIA provisions, and it breaches the public trust.

DOUGHERTY: Autopsies of the raid victims determined that six of the nine activists killed were shot execution-style, including 18-year-old United States citizen Furkan Dogan, who was shot in the face at point blank range by Israelis after he had already lay wounded by multiple gunshots after filming the commandos’ attack. His father, Professor Ahmet Dogan, feels that the United States’ relationship with Israel is to blame for the lack of an adequate United States investigation into his son’s murder, in spite of the fact that he held US citizenship.

AHMET DOGAN, FATHER OF FURKAN DOGAN (TRANSLATED): We see that the United States of America prefers to protect Israel above protecting its own citizens. And I believe that if my son was killed, or any other US citizen was killed, by any other country, the US would have acted differently. This discrimination is also shown by the fact that Furkan’s name was not listed in the human rights report of 2011 about Israel.

DOUGHERTY: Former US Army colonel and retired State Department official Ann Wright participated in last year’s Gaza flotilla. Wright points to an embedded and powerful pro-Israel lobby in the United States as one of the main reasons that Israel has largely not been held accountable for the flotilla raid.

DOUGHERTY: A second flotilla of humanitarian aid has been planned for the third week of June, with ships departing from a number of locations in Europe for Gaza. Israel’s illegal blockade of Gaza continues, and Israeli Prime Minister Benjamin Netanyahu recently stated to UN Secretary General Ban Ki-Moon that "the upcoming Gaza flotilla must be stopped" as it constitutes nothing more than a "deliberate provocation" organized by "extremist Islamic elements." Israel has stated that it intends to block any further attempts at reaching Gaza by sea.