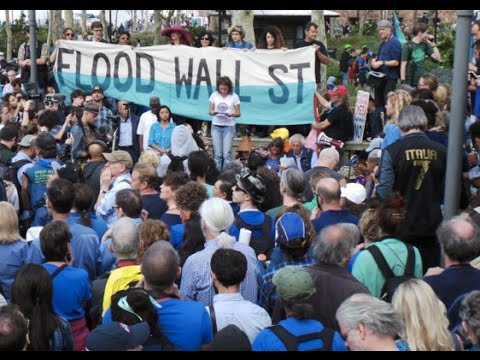 JAISAL NOOR, TRNN PRODUCER: Over 100 were arrested, and police reportedly pepper sprayed protesters in New York on Monday, September 22, as thousands of protesters marched through and shut down lower Manhattan for an action called Flood Wall Street, a protest against global capitalism’s role in climate change. The event came the day after over 300,000 people took part in the largest climate change protest in history.

MICHAEL PREMO, #FLOODWALLSTREET: Activists from Flood Wall Street are occupying the street, Broadway, just north of Bowling Green, and have taken a seat around the bull symbolizing Wall Street.

YOTAM MAROM, #FLOODWALLSTREET: We’re sitting down on Wall Street. We’re taking the fight back to the source, the home of the political and economic system that drives and profits from climate change.

NOOR: And why is civil disobedience important right now?

NOOR: So it’s about 10:45. We’re here down at Bowling Green. You can see the hundreds, if not thousands of people that have gathered behind me. In a few moments, people will be marching from Bowling Green, which is at the southern tip of lower Manhattan, down up to Wall Street. Barricades are already up. But they’re going to try to put the bodies on the line and commit acts of civil disobedience to send Wall Street a message. I talked to a few people about why they’re taking part in the action.

ISHAM CHRISTIE, UNION ORGANIZER: The leaders in this country–the politicians, the economic leaders–aren’t going to do anything on climate change unless they’re pushed by a lot of people. And yesterday’s big march was great. It showed that there was a tremendous amount of support for climate change. But I think we need to sort of take a step further and really hold the institutions, like Wall Street, like the financial sector, accountable for their destruction of the climate.

MAMADOU GOÏTA, EXEC. DIR., IRPAD: My name is Mamadou Goïta. I’m from Mali, and I work for an organization called IRPAD, Institute for Research and the Promotion of Alternatives in Development.

NOOR: And so you think it’s necessary for people to come out here and to get arrested for them to get heard.

GOÏTA: It’s very important, because some people have to act also for others. This is why also we are doing different kind of things. If it can help to understand that we have to listen to the people, it will be a good thing. So, for me, this is part of the action that we need to take, talking about so that they can understand, but also acting so that they can understand more that we are really dedicated to this cause and will go as far as possible, even if we are to be arrested for this kind of a situation.

NOOR: Talk about why you support civil disobedience today.

CHRIS HEDGES, PULITZER PRIZE-WINNING JOURNALIST: Because it’s the only option we have left. None of the traditional mechanisms by which we make incremental and piecemeal reform possible in a functioning capitalist democracy are in place anymore. You know, money has replaced the vote. Lobbyists write our legislation. The courts are a wholly-owned subsidiary of the corporate state. The press has been bought up by a half-dozen corporations, which is why we get the drivel we do over the airwaves. So either we engage in acts of mass civil disobedience to wrest back the constitutional rights that have been taken from us, or we live in a wholesale security and surveillance state, every single one of us. And you cannot use the word liberty when you talk about people who are watched 24 hours a day. At that point, that is the relationship of a master and a slave. And so civil disobedience, mass acts of sustained civil disobedience, which I covered as a reporter in Eastern Europe, which brought down those communist regimes, that’s all we have left.

NOOR: And so Van Jones, who backed out of the panel you were part of Saturday night, we talked to him yesterday.

VAN JONES, ENVIRONMENTAL ADVOCATE, CIVIL RIGHTS ACTIVIST, AND ATTORNEY: You look at California right now, in California we already have cap-and-trade. It’s already working. Carbon is going down. Utility bills are not going up. And a quarter out of every dollar goes directly to poor people in California. I’ve seen the future, and it works. And so you get one Californian, five Californians, ten Californians, eventually D.C. has to act. And then the UN has to act. So the power is in the hands of the people, and the people are on the move.

HEDGES: He is bought off in terms of both corporations and the Democratic Party. And his job is to funnel this kind of energy back into a dead political system. And, you know, I have zero respect for people like that.

TIM DECHRISTOPHER, ENVIRONMENTAL ACTIVIST: Boy. I’m really disappointed to hear that he said that. You know, I think I have a decent understanding of why a lot of the big green groups in the mainstream climate movement support cap-and-trade, because a lot of those groups are funded by hedge funders, by Tom Steyer or by George Soros or by Nathaniel Simons that is the sole funder behind the Sea Change Foundation. And if you’re a hedge funder that made your fortune in that, even giving them the benefit of the doubt that they really want to solve the climate crisis, if they’re a hedge funder that everybody likes to vilify, it would sure be nice for them if the solution to the world’s greatest crisis was something that looked kind of like a hedge fund with financial shenanigans. And more cynically, a wildly fluctuating carbon market is something that any company that has to depend on that would have to be hedging their bets of how to protect themselves in the fluctuation of that market, which means a huge new demand for the kind of vehicles that hedge funds provide. So I have a somewhat cynical view of why a lot of mainstream environmentalists and the big organizations are still pushing cap-and-trade after it’s pretty clear from most experts that it’s not going to work, that it’s going to create an extremely complex and an opaque system full of loopholes that’s really a lobbyist’s dream. And it’s going to create a massive new set of assets for the banking system and has no real path to actually reducing emissions.

NOOR: What do you hope the next steps are after today, after this afternoon?

HEDGES: I hope that we begin to build mass movements that can begin to cripple the actual mechanisms of power in a way that discredits power and ultimately removes those our corporate masters from the positions of power that they occupy.