France sends 1,000 troops into the Central African Republic as violence continues to escalate

France sends 1,000 troops into the Central African Republic as violence continues to escalate 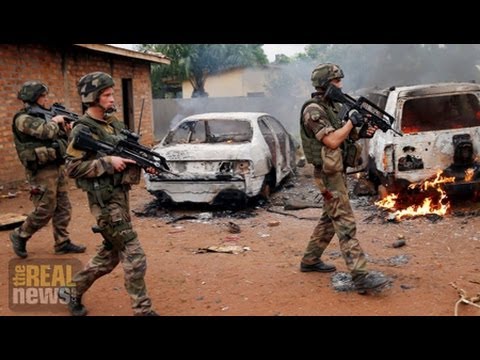 France has deployed 1,000 troops to the Central African Republic in what French officials say is an effort to stabilize the country. It’s been in turmoil since rebels overthrew the president and seized power in March. Now human rights groups are accusing security forces and militias of torturing civilians, as world leaders warn the nation’s on the verge of catastrophe.

FORTUNÉ KINGUELEWA, BOARD OF TRUSTEES, US SEWA: Thank you for having me.

NOOR: So we wanted to get your take on the latest developments. The mainstream media is really emphasizing this as a conflict between the Muslim minority and the Christian majority. What do you feel is the catalyst for the violence right now?

KINGUELEWA: I may say that what the media is saying as a conflict between–a religious conflict between Muslims and Christians is it’s wrong. You know, let’s not be afraid to say it’s wrong. It’s true that we have violence going on, and we need to go to the roots of–around this to understand it.

We need to know that when Ubangi-Shari (the former name of the Central African Republic) was created, France did not have the intention to develop this large piece of land as big as Texas, roughly. It was a reservoir, you know, of minerals and of gold, diamond, timber.

This is what Central Africa was meant to be, just a reservoir of mineral resources.

NOOR: Can you bring us up to speed, kind of jumping forward to today? You know, France is arguing that the only way to stop this violence is through military intervention. What’s your response to that?

KINGUELEWA: This is absolutely true. We are into a situation where I do believe Central Africa are not able to solve the situation. It’s out [incompr.] truly out of our hands. We’ve got a president bringing foreigners, foreigners, to protect them. To protect them against who? Their own population? No. They should understand, like, okay, my time is over. I need to go to a fair election. If I lose, that’s fine, but at least my country’s in peace. They didn’t do it. Patassé didn’t do it. He brought us Bemba’s troops. Bozizé didn’t do it. He brought us Archange and South Africans. And now who? Djotodia is bringing rebels from Bozizé, from Chad, from Sudan. And he’s just out of their hands. We cannot control it.

And it’s absolutely true that right now we need that intervention.

NOOR: But critics would say that France is only motivated–they’re not motivated by humanitarian intentions. They’re only motivated in their quest for mineral and natural resources.

KINGUELEWA: Here is–that is a very, very delicate question, because if I go this way, it’s like I would not recognize, you know, the importance of what France is doing now, what the international community is doing now.

You know, first of all, I want to acknowledge that we really truly need this help. But also, this help will not be there forever. We Central Africans have to understand that it’s more or less a ceasefire allowing us to sit down and talk to one another and to speak the truth and to stick to our decision.

Now, you said France is not really seeing the humanitarian side of the question. It’s going to be a sort of ingratitude to say yes. It’s going to be. But it’s also a high politics. France could have intervened much earlier. I do believe–and I’m responsible of my words, and I might be wrong, but France went to Mali–I don’t think it’s because of the Malians. It’s not because of jihadists. Let’s not forget that Niger, where France is getting almost all of its uranium, was attacked. They got, I think, four workers that were kidnapped. Mali is next door to Niger.

Now that the international community is aware of that situation, France is back with us.

NOOR: We’ll certainly keep following developments in the Central African Republic. Thank you so much for joining us for this interview.

Fortuné Kinguelewa is a Central African citizen who has been living in USA since 2001 after working as an investigator at the US Embassy in Central Africa. Once in the USA, Fortuné had several jobs including a salesman in Bethesda, MD, and Washington, D.C. He was also a FedEx ground contractor in Beltsville MD, and currently drives…