Melvin Thompson, a UAW local president, has joined Jorge Parra on hunger strike to support his bid to force GM to negotiate rights of Columbian workers

Melvin Thompson, a UAW local president, has joined Jorge Parra on hunger strike to support his bid to force GM to negotiate rights of Columbian workers 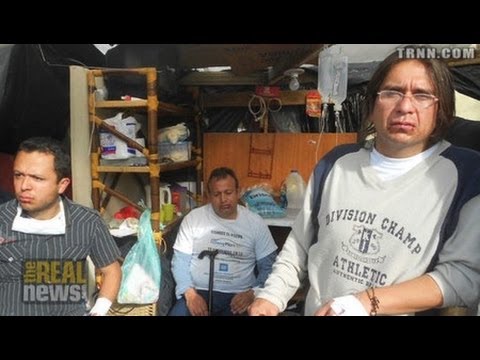 The hunger strike of Colombian GM workers is back on after what was thought were negotiations that would lead to some resolution. Now joining us from Detroit to talk about where things are at in the hunger strike, first of all, sitting on our left, is Frank Hammer. He’s a longtime trade unionist. He’s an adjunct faculty member in labor studies at the University of Indiana, Wayne State University, former president of United Auto Workers local at the GM Powertrain plant in Warren, Michigan, and a regular contributor to The Real News Network. Thanks for joining us, Frank.

JAY: And also joining us is Melvin Thompson. He’s alsoâ€”he’s an active Detroit autoworker, former president of UAW Local 140. And he has pledged to fast in solidarity with Jorge Parra, who’s one of the Colombian autoworkers who has restarted his hunger strike.

MELVIN THOMPSON, FMR. PRESIDENT, UAW LOCAL 140: Thank you for having us.

JAY: So, first of all, Frank, give us a quick update of what’s been happening. The last time we reported on this, mostly, there were supposed to be these re-negotiations that was going to lead to some resolution. But that’s not what happened.

HAMMER: The mediation that took place in Colombia under the supervision of the Federal Mediation and Conciliation Service basically ended in no agreement. And Jorge Parra, after that failed mediation, came to the United States seeking a meeting with the corporate heads here in Detroit because he felt that the settlement wouldn’t be possible with the plant management at Colmotores in BogotÃ¡, Colombia. So he has been here in an effort to get General Motors to get back to a mediation and to get to a just settlement.

What General Motors offered was not commensurate with the job losses of the workers involved, nor with their medical expenses. And what the workers ultimately really wanted was to return back to their plant, to gainful employment in the GM system. And there has been no agreement. And we’re trying to pressure General Motors into recognizing what they have to do.

THOMPSON: I started the hunger strike with Jorge on November 20, which is 14 days ago. And the reason I did was two reasons, one just a human reason, that Jorge is here by himself and needed a comrade that was going through what he was going through. The other is that we need to know and workers in Colombia need to know that we’re willing to go through some things because our struggles are tied together. So we have North America and South America and Central America on a hunger strike.

JAY: So you’re on a water-only diet right now.

JAY: And did why this issue move you so? I understand the issue of international solidarity, but what is it about what was happening in Colombia?

THOMPSON: Because it’s so extreme, but you can see the parallels to how we do business here. Everything that they endure, we endure to a much lesser extent.

JAY: What are some examples of that?

THOMPSON: For example, they have a three-tier wage system. We have a two-tier wage system. They have a plant doctor. We have a plant doctor. You know, our plant doctorâ€”if you asked my opinion, I’m not a doctorâ€”you know, underestimates whatever people’s problems are. You go to your doctor to get the diagnosis that actually would, you know, bring you back to health, and then our doctor submits to that doctor’s findings. Well, in Colombia, there’s no doctor to submit to the other doctor’s findings.

JORGE PARRA, PRESIDENT, ASOTRECOL (SUBTITLED TRANSL.): Our association was created with the objective of fighting together due to the illnesses we all have, illnesses that were acquired on the job. These illnesses are muscular-skeletal disorders, such as spine problems, hand problems like carpal tunnel, and elbow, shoulder, and repetitive strain problems.

THOMPSON: So it’s like the path we walk along is the same. We just have ways of implementing things that they don’t. I’m sure they have a safety program, but they don’t have a union that can validate whether this safety program is what it says it is or not.

JAY: And, Frank, you’ve been involved in this issue since early on. What were the demands and grievances of the Colombian workers that drove theâ€”you thought required you to get involved?

HAMMER: Well, one of the most critical things is that General Motors requires new employees to sign a form that says that they will now belong to a union. A week from now we’re going to be recognizing Human Rights Day, which is involved with the Universal Declaration of Human Rights. And one of the rights that we have as a humanity is the right to form unions. And in General Motors in Colmotores, they prevent that from happening. The only thing they have there is what’s called a yellow union or a company union, and they consist of spies in the plant observing whether workers are talking union. And if they are, they’re subject to being fired.

So I think that here in Michigan, our union rights are on the chopping block. They’re talking about initiating right-to-work legislation here in the state. So what Melvin’s talking about, that we’re on sort of a common path but we’re on a different part of that path, is really true. It’s all one of a piece. And if General Motors had its way, we would look a lot more like Colombia.

JAY: And, Melvin, what’s happening in terms of Jorge’s request or quest to meet with General Motors? And I guess a second part of the question is: how long are you on hunger strike for? What’s the issue that would end the strike?

THOMPSON: What Jorge wants is to meet with, you know, General Motors and to achieve his concept of justice, which is very simple. They simply want to work for a living. They’d like their jobs back. It’s already been proven by some folks going to jail that records were falsified. They’d simply like their jobs back, any training that they need for jobs that they can’t do now because of their injuries, and medical care, so that whatever damage has been done to their bodies can be repaired. The length of the hunger strike is just until justice occurs.

Now, I know that at some point my body will change from eating reserves to eating itself, and they call that starvation. At that point, I know I won’t be able to damage myself and continue. So at that point, I would go to a liquid diet. I still will not eat. And I’m sure that I can get the nutrition that I need to be alright on a liquid diet.

JAY: Frank, why isn’tâ€”if the demand is to give jobs back, I mean, it doesn’t seem such a hard thing for General Motors to agree to. Why isn’t this getting resolved? I mean, GM did send this whole team of people to Colombia to negotiate. Why can’t GMâ€”what is it about this that GM can’t agree to?

HAMMER: Probably because we’re dealing with the tip of the iceberg. And probably, if I know General Motors, they’re scared to death of the precedent that this would set, that they would have to recognize the justice of Jorge and the other workers’ claims and respond and recognize that.

And the other thing, I think, is that because they’re so afraid of having their plant be a union plant, they know that if Jorge returns to work and if the other members of Asotrecol return to work, that they will likely want to organize a union in their plant. And I think that General Motors is wanting to have a union-free environment, and that’s probably why they are resisting. But there’s no justice in their position. The justice is with the Asotrecol workers.

And by the way, along with the hunger strike, they’ve been down in front of the U.S. Embassy in a makeshift encampment now for about 490 days. And I’m talking about not only the workers, but also their spouses and children. Many of them have been evicted from their homes because they have no income. So it’s a pretty tough situation. And going into the Christmas season, we’re looking to raise some donations and money for the workers down there and their families so that they can survive and continue to struggle.

JAY: And just to remind everyone and remind me, what happened is these guys were injured at work and then were not given any proper sick benefits, and they can’t get their jobs back. That’s the heart of the dispute?

HAMMER: Yeah. And the company found ways to fire them. So they’re without a job. They’re physically unable to work. Jorge, for example, requires a major spinal surgery. So they can’t work. They don’t have any medical benefits. They certainly have nothing called workman’s comp. So they’reâ€”they have nothing.

JAY: We’re going to continue this, covering this story. Jorge actually is in the Detroit area still, and we’re going to, in the next week or two, have Frank come back with Jorge. And we can talk further about all of this. Thanks very much, Melvin, and thanks, Frank. And good luck, Melvin.

HAMMER: Thank you very much, Paul.

Frank Hammer is a longtime trade unionist and an adjunct faculty member in labor studies at the University of Indiana and Wayne State University. He’s the former president of United Auto Workers local 909 at the GM Powertrain plant in Warren, Michigan. Melvin Thompson is a Detroit autoworker and former President of UAW Local 140…