Retired UAW Local President Frank Hammer says its unconscionable for GM to have waited until 2014 to recall a defective product it was aware of in 2001, which should prompt the public to examine the company's practices in foreign assembly plants as well

Retired UAW Local President Frank Hammer says its unconscionable for GM to have waited until 2014 to recall a defective product it was aware of in 2001, which should prompt the public to examine the company's practices in foreign assembly plants as well 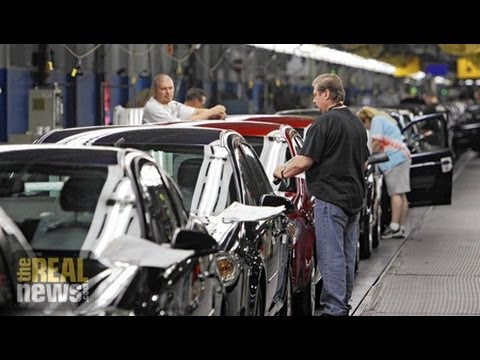 According to a new report, more than 300 people have been killed in crashes of General Motors cars that have been recently recalled. That’s more than ten times the number of fatalities GM has reported. According to the study by Friedman Research, 303 people lost their lives due to defective ignitions that could cause cars to stall and not deploy their airbags.

Critics have questioned why it’s taken so long for GM and the National Highway Traffic Safety Administration to act. The Department of Justice has launched a criminal investigation into the matter.

Now joining us to discuss this is Frank Hammer. Frank is a retired General Motors employee, former president and chairman of Local 909 in Warren, Michigan; now organizes the Autoworker Caravan, an association of active and retired autoworkers who advocate for workers’ demands in Washington.

Thank you so much for joining us, Frank.

FRANK HAMMER, COFOUNDER, AUTOWORKER CARAVAN: Thank you for having me, Jaisal.

NOOR: So, Frank, let’s get your reaction to this recall. GM admits it’s known about this problem since 2001. This problem would have just cost a few dollars to fix. Why didn’t they act, and what does this tell us about GM?

HAMMER: Well, first of all, I think it’s rather extraordinary that GM only initiated the recall at the beginning of–or February of this year, considering that there’d been 13 deaths directly implicated by this faulty ignition switch, and possibly these 300 that you mentioned.

General Motors knew about it going back as far as 2001. They had internal investigations that showed that it was a problem. They had complaints from fatalities, families who saw their cars stall, and they reported that they met with institutional silence from GM and from dealers in response to their complaints.

I think what’s really extraordinary is that GM in 2007 actually changed this ignition switch because they realized it was defective and never initiated a recall, not for another seven years.

The issue with the ignition switch is that they claim that if you had too many things on your keychain or if there was a jarring motion, that it would take the car from–let’s say you were going down the freeway. It would put it into a–it would shut it down.

And what GM said was, well, that’s not a problem, because you can still maneuver the car even though you didn’t have power steering, even though you didn’t have power brakes. And, of course, the airbags wouldn’t function either. That was the attitude that GM had of why they would not make the recalls earlier, that somehow the drivers could just go ahead and take care of it because they can maneuver the car even with the power off.

NOOR: And, Frank, there’s–it was hundreds of reports given to GM, who gave them to the National Highway Traffic Safety Administration, and they’ve also been faulted for not acting. What’s your response?

HAMMER: Well, there’s a representative from Kelley Blue Book that said that there’s a very close relationship between the National Highway Traffic Safety Administration and the auto producers, especially here in the U.S. So it just seemed like they kept on–their formal statement was that there was no trend, no trend of these accidents, even though they had hundreds of complaints. And it seemed like they were ducking their responsibility. The former director of that National Highway Traffic Safety Administration faulted the agency for not issuing a recall as early as 2007, when the part was changed, saying that the administration was not abiding by the law as far back as 2007.

NOOR: And I also wanted to get your response to the fact–and I was reading this in a recent piece in The Economist–that because of GM’s bankruptcy, any claims or injuries made for accidents before July 2009, the current GM organization would not be liable. Any victims would have to sue the now bankrupt, old GM, essentially, in court.

HAMMER: Yeah. It’s really quite incredible that the old GM was separated into two organizations, one the old GM, and now the one we’re dealing with now, which is the General Motors Company. And the General Motors Company are saying by virtue of the settlement and the bankruptcy, any liabilities that GM had before July 2009 it would not be held responsible for, that claimants would have to go to the old GM. And oh, by the way, the old GM, you know, we didn’t leave any cash there, so you’re kind of, like, SOL.

Now, Joan Claybrook and the Center for Auto Safety have sent a letter to GM this week saying, you know, the moral thing to do would be to set up a trust fund of $1 billion to handle the liabilities that came before 2009. There is going to be a big issue about whether GM is going to be held liable for these accidents and for these injuries and deaths.

NOOR: And, Frank, I wanted to talk more about this letter by Joan Claybrook. How does what she said tie in to the broader work you’re doing around GM workers around the world?

HAMMER: Well, as some of your viewers know, I’ve been quite active in regards to supporting Colombian workers who work for GM in Bogotá, Colombia. And I thought that the quote from Joan Claybrook was very incisive and very direct, and I’m going to read it to you. This is–she said, in regards to GM and the recall, that “[t]his is an immoral act by General Motors to cover up this defect” and to “not tell people,” and the result was inevitably “people were going to die and be injured, and that to me is unconscionable”. “It’s like throwing an airplane passenger out” of the airplane “without a parachute”. I thought that’s really striking.

And what’s really all the more striking is that’s exactly what’s happened to the GM workers in Colombia. And I would ask people to think about how GM has handled the recall and think about it in terms of how they dealt with the GM workers at their assembly plant. Same thing. Workers were injured due to defective and poor equipment inside the factory–no ergonomic standards whatsoever. And the workers really tried to use the legal channels, much in the same way that the Traffic Safety Administration would have been used, to no avail. The workers cannot avail themselves of any authorities in Colombia, because Colombian authorities were hooked up with GM as well. And finally, when the first hunger strike got GM’s attention after a year that they were camped out in the tent in front of the U.S. embassy, what happened is that GM went in and changed the equipment, made it more ergonomically friendly, but in the meantime left the workers out in the cold. And it’s kind of the same thing that they’ve done here: they went ahead in 2007, changed the part, but never thought to recall the vehicles in looking out for the safety of the drivers. And in the case of the autoworkers who were injured in that plant, they’ve been thrown out in the cold, and there’s no sort of recall to say, you know, we’ve got to make this right, not in the case now of drivers, but now we’re talking about in the case of GM workers. So it’s the same lack of morality.

A while ago we talked about GM getting out of financial bankruptcy, but what we said was that General Motors needs to get out of a moral bankruptcy. And it seems that we still have this old culture that pervades GM. And it’s arrogance, whether it be towards the drivers or whether it be towards workers. And the bottom line is more profits for the Wall Street bankers that own them, and more higher wages or higher pay for the CEOs.

NOOR: Frank Hammer, thank you so much for joining us.

NOOR: And we’ll link to all of our interviews with you regarding the fate of the Colombian workers injured at GM plants in Colombia. Thank you so much, Frank.