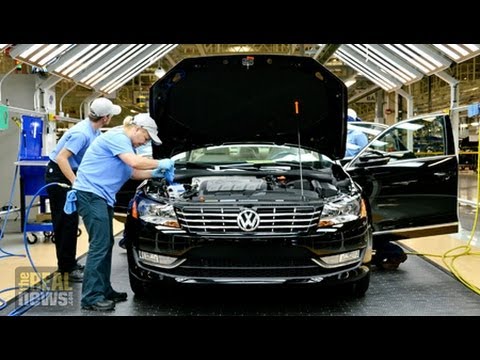 In what’s being called a major blow to organized labor in the South, workers at the Volkswagen plant in Chattanooga, Tennessee, voted not to join the United Auto Workers. Some 1,500 workers voted 712 to 626 against unionizing.

Proponents of unionization say that there were strong anti-union messages before and during their vote. For example, third-party groups, like Center for Worker Freedom, put up a dozen billboards like this one. It reads: “Detroit: Brought to you by the UAW”.

Also, politicians, like Tennessee Republican senator Bob Corker, lobbied against the vote. Corker even publicly stated that the Chattanooga plant could expand to produce other vehicles if the workers voted down the union, a statement Volkswagen denied. It’s possible that the UAW may have grounds to challenge the vote based on simply that.

Well, now joining us to discuss all this is Frank Hammer. Frank Hammer is a retired General Motors employee and former president and chairman of [UAW] Local 909 in Warren, Michigan. He now organizes with the Autoworker Caravan, an association of active and retired autoworkers who advocate for workers’ demands in Washington.

Thanks for joining us, Frank.

FRANK HAMMER, COFOUNDER, AUTOWORKER CARAVAN: Thank you for having me.

DESVARIEUX: So, Frank, let’s just start out with a simple question. What’s your take on why the workers voted against unionization?

HAMMER: Well, let me just first say I want to shout out to any VW worker that is watching this interview.

I think that the margin was very slim for the defeat. There was only 86 votes difference. Had 44 changed their minds and voted yes, we would be talking about a union at VW. So it’s quite an effort that they engaged in, and I’m really quite proud of the workers in VW.

I think that it’s a sad note, because it’s a real victory that all these right-wing forces that you describe are going to be crowing about.

I think that one other note you should look at is that this is–the same week when the vote went down, this was the same week in 1937 that the UAW won recognition from another big company, and that was General Motors, back in ’37. And that was after a 44-day occupation of the GM factories in Flint. So today’s union is not your father’s UAW.

I think that the essential issue was that the UAW cannot promise job security. I think that was an essential underlying concern of Volkswagen workers who are looking for stability in their lives.

DESVARIEUX: Okay. So at the end of the day, you feel like it was just fear?

HAMMER: Well, I think–yeah, I think there’s an element of fear about what would unionization mean, and looking at the North. And the reactionaries made a big deal of saying that, oh, you know, the UAW was responsible for Detroit. Well, the reality is that it was the auto companies that were responsible for the fate of Detroit, but it was the auto companies getting away from unionized plants and wanting to go to nonunion locations.

So why do we have VW not in Michigan but in Tennessee? Because they’re looking for a nonunion environment. And workers are fully cognizant of that, that if they organize and want representation on the shop floor, that the companies want to retaliate and say, well, we’ll go to a nonunion location.

DESVARIEUX: Okay. Let’s discuss further the forces at play around the vote. Volkswagen agreed not to oppose the unionizing drive, but many anti-union forces were active in and around the plant.

But for you, Frank, I know you just have a better background of what it’s like for unions to organize and attempt to organize factories. What do you feel like was the weakness here for the UAW in attempting to organize Chattanooga?

HAMMER: Well, from everything, all the contacts that I’ve had, things that I’ve read, and so on, it seems that the very basic premise of the neutrality agreement that was drawn together by the UAW and Volkswagen was sort of fatally flawed. In exchange for alleged neutrality by VW, the UAW had to make certain agreements. And that included they couldn’t make any house visits. They couldn’t publicly criticize VW.

The UAW actually made an agreement–and I want to read it; it’s a quote–that they would maintain and “where possible” enhance “the cost advantages and other competitive advantages that [VW] enjoys relative to its competitors”. And so they already had an agreement in advance of being recognized as the bargaining unit that they were going to keep VW competitive in relationship to the plants in the North and elsewhere. And sure, VW workers looked at that, didn’t appreciate that the agreement was, apparently, undisclosed, and that it already tied the workers’ hands in terms of what they were going to be able to do.

DESVARIEUX: Frank, what will be the impact on the prospects of further unionizing in the South? Essentially, what’s the next step here for the UAW?

HAMMER: Well, I think that the UAW has to reexamine their approach. And I think their approach can be described as wanting to be the subcontractor for VW to handle its labor relations. Not only was that the model that they were promoting, but they were asking the workers to pay for it with their dues money. And I think the workers rejected that. Even though many workers feel a strong need for unionization, the fact that the UAW had to not say anything publicly about VW–in fact, on the contrary, was praising VW to the skies–was a very unconvincing argument for why the workers ought to unionize.

I think that the UAW has a convention coming up in June. And this is the time when the rank and file are supposed to be the ruling body of the UAW, and they come together at the convention with elected delegates. And I think there has to be a very serious self-examination as a union about the product that we’re promoting, our approaches to how we do it, and what our paradigm is going forward about how we expand unionization and how we strengthen workers’ rights in the U.S.

DESVARIEUX: Frank, do you have any suggestions? How would you shift the paradigm?

HAMMER: Well, first by having a democratic discussion at the convention. Unfortunately, conventions have become very scripted, and the script is enforced. And this is something that UAWs have to break away from. The leadership has to be willing to invite other folks that are not willing to subscribe to that script, and to open it up for actual controversy, the discussion, debate.

One of the issues that’s going to be brought up is whether the UAW is going to be able to get a dues increase passed at the convention. And the sentiment that I’m already hearing now–and locals are already passing resolutions saying, we don’t want to support a dues increase if we don’t change the way the UAW operates internally, offering democracy to its members. And once it operates with democracy for its members, then it can go and organize and say to workers, we offer you democracy on the shop floor, just the way we do inside our union to our members determining policy.

DESVARIEUX: Alright. Frank Hammer, thank you so much for joining us.

HAMMER: Thank you very much, Jessica.