Peru’s New Conservative President A Close Ally of the US

But his "interests are more close to the interests of multinationals than" the citizenry, said sociologist Francesca Emanuele.

While serving as Prime Minister during the presidency of Alejandro, Kaczynski was also working as an advisor to the Hunt Oil company.

Kuczynski pushed for changes to laws that had required extracted resources to be used for internal consumption.

The changes allowed for exports of natural gas to Mexico. Peru lost an estimated $20 billion in revenue.

Emanuele cites Kuczynski's call to fight narco-trafficking, and his unwillingness to privatize the water system, as positives for the new presidency.

But Kuczynski is likely to request military aid from the United States and subsequently align himself with US interests.

But his "interests are more close to the interests of multinationals than" the citizenry, said sociologist Francesca Emanuele.

While serving as Prime Minister during the presidency of Alejandro, Kaczynski was also working as an advisor to the Hunt Oil company.

Kuczynski pushed for changes to laws that had required extracted resources to be used for internal consumption.

The changes allowed for exports of natural gas to Mexico. Peru lost an estimated $20 billion in revenue.

Emanuele cites Kuczynski's call to fight narco-trafficking, and his unwillingness to privatize the water system, as positives for the new presidency.

But Kuczynski is likely to request military aid from the United States and subsequently align himself with US interests. 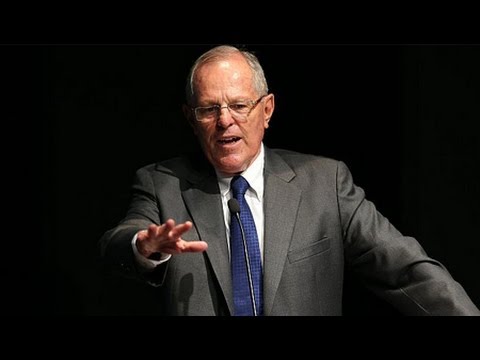 GREGORY WILPERT, TRNN: Welcome to the Real News Network. I’m Gregory Wilpert, and I’m coming to you from Berlin, Germany.

Five days after Peru’s June 5 presidential runoff vote ended, the country’s electoral officials finally announced the official results of the election. Part of the reason for the delay was the close vote, which was exceedingly close, with only 0.23 percentage point difference between the winner, Pedro Pablo Kuczynski, and the loser, Keiko Fujimori.

It would seem that the last minute endorsement for Kuczynski that Veronika Mendoza made, who was the left candidate in the first round of the election, probably made a difference and prevented the daughter of the former right-wing president Alberto Fujimori, from winning the presidency. Kuczynski however, himself is a right-wing politician.

With us to discuss Peru’s election result is Francesca Emanuele. Francesca is a Peruvian sociologist, political analyst, columnist and co-founder of [Indaga], a research cooperative based in Madrid, Spain, that works on social and political issues. She joins us from Washington, DC. Thanks for being on the Real News, Francesca.

FRANCESCA EMANUELE: Thank you for having me, Gregory.

WILPERT: This was one of the closest elections anywhere. Keiko Fujimori’s father had left a legacy of authoritarianism and people around her have been tied to drug traffickers. Why do you think she almost won the presidency when everyone in Peru had urged voters not to vote for her?

EMANUELE: Well, we have to remember that she tried to be a president before, too, and she went to the second round, too. In the last five years she has been campaigning. The whole last five years were a campaign for her and she used all the money that she could get to encourage people, especially in rural areas in Peru to support her and [especially also] in the north of Peru.

Why people wanted to vote for her is because during the dictatorship of Fujimori the brains of Peruvians, including even the elite were brainwashed. We have had a monopoly system in the media that is still there now, and the history about what happened during that dictatorship hasn’t been spread or spread through the country, and a lot of people think that that dictatorship wasn’t that bad. Thankfully, in the last few months I’m sure that a lot of people got more knowledge about this horrible dictatorship than the knowledge that they got in the last 25 years.

WILPERT: And what do you think can we expect from Pedro Pablo Kuczynski now that he will be president? And also Fujimori’s party, the popular force party, won an absolute majority in the parliament for the first time, so Kuczynski will have to govern with the far right. What do you think will happen now? Will this mean more neoliberalism for Peru, or what do you project to happen when Kuczynski takes over?

EMANUELE: Well, first I would like to say that this victory of Kuczynski was a victory for the left, too, and this is a good side of the story. That means that the left has the presses in the country, and as you said, like one week before the elections Keiko Fujimori, the daughter of the dictator Alberto Fujimori, was, had an advantage of five points over Pedro Pablo Kuczynski and it was when Veronica Mendoza, the leader of the left who got the third position in the first round presidential election, encouraged her voters to vote for Pedro Pablo Kuczynski that was the key issue to change the situation and to give the presidency to Pedro Pablo Kuczynski.

So, that’s a good sign. That means that there’s going to be a left. There’s going to be, like, pushing that is going to be in a position. They said that they are going to be vigilant. But the bad part of this situation is that Pedro Pablo Kuczynski is a rich businessman. He is a former Wall Street economist. He worked for the World Bank and he also has been for many years in politics in Peru, so if we go over some episodes of his biography we will see that his interests are more close to the interests of multinationals than close to the interests of people.

For example, in 1968 he was working in the central bank and during that time we had a coup, a military coup, but this coup was socialist, or the military coup who was running the country at that time, he claimed himself a sort of revolutionary and he [expropriated] an all [extraction] center which was in the hands of a company that was called Petroleum International Company, and when Pedro Pablo Kuczynski was in the central bank he facilitated, he gave 150 million dollars to this company to get the money from the [expropriation] that they got, but the president at that time didn’t give his permission to do that so Pedro Pablo Kuczynski had to flee the country to the United States.

And situations like this has happened more than once. the most shocking and the most recent one was when Pedro Pablo Kuczynski was the adviser of an oil company called Hunt Oil and then he became the finance minister and then the prime minister during the presidency of Alejandro Toledo, and during that time what he did is give a huge contract to this company, Hunt Oil, to export natural gas from Peru to Mexico. But the most shocking thing is that he pushed to change some laws because the land where they were extracting the oil, sorry, the natural gas, was supposed to provide this gas to the Peruvians, to internal consumption and not to exports, but he pushed to change the law and some expert says that Peru lost 20 thousand million dollars because of this contract.

So, this is just, we can see that he is a person who is a lobbyist who wants to just get some contracts, and what probably will happen because he, now he’s calling himself a progressive, but he has been a neoliberal and what he thinks is that Peruvians should get really basic rights, but those rights that they can get should be managed by private companies, and he will bring a lot of companies to Peru and most of the contracts or plants or projects that now have been [stopped] because of protests, especially with the mining industry, probably we will see that he’s going to push to execute them and we’re going to see more conflict in the rural areas of our country.

The good thing is that he said that [the] water system won’t be privatized. That’s really good. He also said that he will go against narco traffic, and it’s really interesting to note that his vice president, Mercedes Aráoz, is a historic figure for the APRA party. When the APRA party was running the country during 2000 and 2005 the president gave a commutations of sentences [inaud.] more than 3000 people related, with sentences related with narco traffic, and in 400 sentences of those 3000 belong leader members of narco traffic groups, so it’s really interesting that he is related with figures that has connection with narco traffic and he’s saying that he’s going to go against narco traffic.

It’s really likely that he is going to ask for military aid by the US, because he has a very good relationship with the US and we know what happened when the US help and create a stance against drugs as we could see or can see in Mexico and also Colombia. He also said that he will support the Transpacific Partnership. Sorry.

WILPERT: Sorry, that kind of brings me to my other question. We don’t have very much time, so I just want to get it in quickly, which is precisely what the role of the US is in this election as far as you can tell. I mean, we know that the Obama administration is very much supporting of course the new rightward shift in Latin America, particularly Obama being buddies with Macri and not condemning the coup in Brazil. What do you foresee there with US involvement with regard to Peru now that Kuczynski has come to be President.

EMANUELE: Well, there is one thing really interesting, and it’s that during the campaign for the second round of the presidential elections, the last six weeks, more or less, Pedro Pablo Kuczynski came to the US. He was here for eight days and he said that he went to visit some areas with Peruvians but we don’t really know if he had meetings with the state department, that it’s really likely that he had those, and there’s the suspect, some people think that the US helped him to get the presidency.

WILPERT: Unfortunately we’re out of time, but hopefully we can have you on again to talk more about what’s going on in Peru also in the context of the changes in Latin America. Thanks so much, Francesca, for joining us.

Francesca Emanuele is a Peruvian Sociologist, Political Analyst, columnist and co-founder of Indaga, a Research Coop (Cooperative) based in Madrid-Spain and focused in social and political issues.