The Consumer Finance Protection Bureau had initiated an investigation into the data of theft of data of 143 million US citizens, but now the CFPB abandoned the investigation under Trump's budget director Mulvaney. Bill Black explains the consequences

The Consumer Finance Protection Bureau had initiated an investigation into the data of theft of data of 143 million US citizens, but now the CFPB abandoned the investigation under Trump's budget director Mulvaney. Bill Black explains the consequences 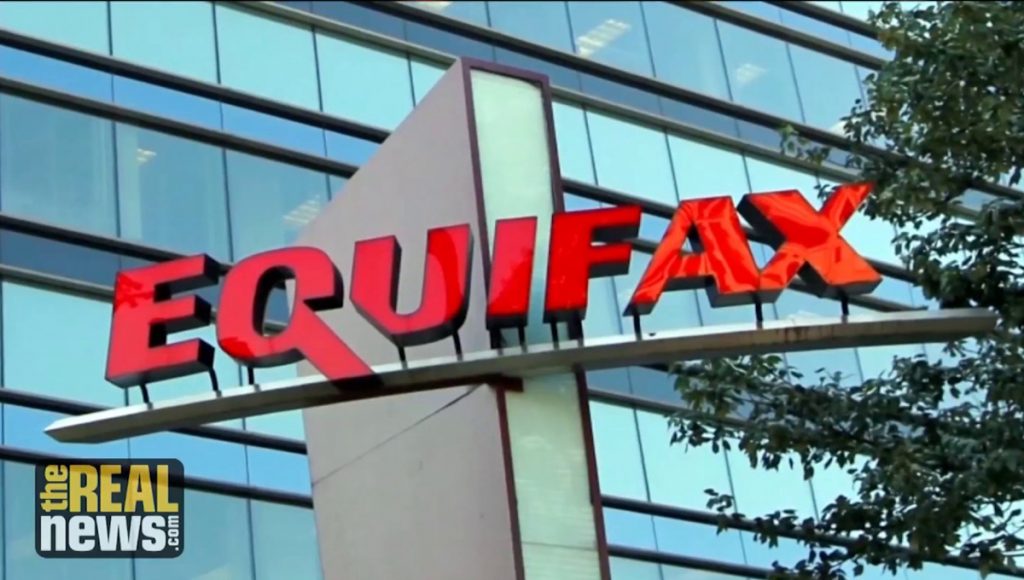 SHARMINI PERIES: It’s The Real News Network. I’m Sharmini Peries coming to you from Baltimore. Reuters reported that Consumer Financial Protection Board or CFPB has halted it’s investigation into the theft of personal data from the credit monitoring company, Equifax.

Last September, Equifax informed the public that hackers had stolen personal credit data of 143 million people from Equifax, and CFPB under the director of Richard Cordray immediately announced it would launch an investigation into the massive data theft. However, Cordray, an Obama appointee, left the agency in November to run for governor of Ohio. Trump’s budget director, Mick Mulvaney, took over the agency and is now halting various investigations including the Equifax scandal being just one of them.

Joining me now to analyze what’s going on with Equifax data breach is Bill Black. Bill is a white collar criminologist and associate professor of economics and law at the University of Missouri-Kansas City. He’s the author of The Best Way to Rob a Bank is to Own One. Thanks for joining us, Bill.

SHARMINI PERIES: So Bill, let’s start off with the significance of halting this investigation into Equifax data breach.

BILL BLACK: So, let’s start with the substance and then go to what it indicates about ideology as well. This is probably, of course you never know because you don’t know what data breaches have not been disclosed, but probably the largest data breach in history. And it’s the kind of breach that when it happens in the future, the thieves are going to be able to use the information exceptionally quickly to do exceptional harm but they don’t seem to have gotten their act together enough yet to have been able to do that with Equifax. This is the one we really need to learn from and fix things quickly because the next one is going to be vastly more harmful.

And Equifax, as you said, is 143 million people that it affected, a goodly portion of the United States of America. Each of us is directly put at risk. It’s a particularly nasty thing because, of course, as a credit rating agency, we are not the customers. We can’t say, “Oh, we’re going to cease doing business with Equifax,” because they are so outrageous both in terms of allowing the hack and then everything they did after the hack until Elizabeth Warren successfully pressured them to at least clean up some of their response was, the word reprehensible really describes it.

But we can’t protect ourselves and we can’t force them, Equifax, to do the right thing by withdrawing because we’re not really a customer which is to say, again, we critically need investigation and relief. The agency, the absolute agency in the entire world best situated to do the investigation and produce an effective remedy is the CFPB, and that is precisely the agency that Trump will not allow to act. It isn’t like nobody’s investigation. All 50 states’ attorney generals are investigating Equifax. That of course is simultaneously good news and bad news because it’s crazy to have 50 separate places investigating.

That’s why you have a federal government so that you can have a federal agency that has the expertise and the staff level and the computers, the systems needed to do the investigation. On top of that, the CFPB under Cordray was doing the investigation the right way. It said, “Hey, the Federal Trade Commission also has some jurisdiction here. Let’s do a joint investigation.” Right? It’s more effective. It’s less cost to Equifax. It’s a pure good thing. Cordray, when he was running CFPB said, “And the banking regulatory agencies are heavily involved here because they monitor aspects of credit rating agencies and banks use credit ratings, of course, all the time in making loans. We should take advantage of the expertise of these banking regulatory agencies and the facts that they have staffs of examiners who have individual expertise in looking at both how the banks using key Equifax customers use this but at Equifax itself.” Right?

Cordray brings them in and they all say yes. So, all of that has been thrown away by Mulvaney who, mind you as you said, is running OMB which at the time of the budget deals and everything else is 150% of your time type job, and he’s supposed to do that job and then with his little time left over run the CFPB which is, of course, a farce which is to say the only order he’s given is, “Thou shalt not do anything productive.” Right? It’s absolutely insane. Now that filters into the politics because nobody likes Equifax.

SHARMINI PERIES: And Bill, especially since Equifax announced it would provide various new identity theft protection services to which consumers may subscribe should their data have been compromised by the hacking of Equifax. So, shortly after this took place, Senator Elizabeth Warren in a Senate hearing pointed out that Equifax was exploiting ways to profit from its own data breach. Now first of all, is that what took place? If so, does Equifax even have an incentive to protect our data if they can still make more money from the fact that if it was breached?

BILL BLACK: Yeah so, Equifax took the old saying, “When you’re dealt lemons, make lemonade,” but here of course they had done the deal, right? They had stacked the deck in a way that shafted all of us. They said, “Screw making lemonade. Let’s make you pay to make us more profitable because we completely screwed up.” They didn’t just screw up. They screwed up in every possible way. They screwed up in that the key vulnerability that allowed the hack was identified in advance, by the way, by nonprofits who made it all public free so Equifax could fix it. That’s what nonprofits do.

Equifax ignored that, allowed the breach to occur. Equifax allowed the breach to go on for months. Then Equifax discovered the breach and refused to notify us so that we could protect ourselves for months while they created A) a lying cover story about it and B) as you say, a whole bunch of different ways where they could profit from the breach by several different ways but you’ve identified one of the major ones, that they would actually force us to pay them fees both to get access as to how our data had been compromised and then to supposedly protect us. Although why anyone would think Equifax is an entity would protect us from future breaches effectively is a little beyond me.

And they only stopped doing this when Elizabeth Warren turned them into a pinata on a daily basis and just smashed them and the CFPB was coming after them. That is the only reason they ceased being absolutely reprehensible and went back to their old pattern of simply being scurrilous, right?

BILL BLACK: In that context where nobody likes Equifax, where everybody hates Equifax including the banks, right? Including most of the key political donors probably to Trump. In those circumstances when it is spectacularly unpopular, where it is a total breach of its duty to the public, where it’s a total breach of its oath of office, they are still reflexively like you hit a patellar tendon and the leg goes whish, they just cannot help themselves. They so hate the government, they so hate anything effective to protect the consumers that even when what they’re doing is spectacularly unpopular where it might even cost them, they will continue to do the wrong thing.

SHARMINI PERIES: Or in this case when they’re offering to help and it would cost them less, they still don’t want the help. Now to add fuel to the fire, the Allied Progress Organization points out that Mulvaney’s congressional campaign has received thousands of dollars in campaign donations from Equifax. How is it possible that someone who received campaign donations from Equifax is now in charge of monitoring that company and how it’s servicing the public?

BILL BLACK: So, I know this is probably not news but we’re dealing with the Trump administration where conflicts of interest are synergies that one maximizes, one gets rich by mentioning in presidential speeches “Hey, I’m doing free publicity for my golf courses, my hotels. I hold events. I make the federal government pay,” where we have openly trade associations, the sleaziest of lobbyists holding their events at Trump properties and making it public that they’re holding their events at Trump properties because, hey, it’s not a conflict of interest as I say. It’s a synergy.

SHARMINI PERIES: Bill, what needs to happen to ensure that an entity such as the Consumer Financial Protection Bureau is truly independent and actually protects consumers against financial fraud of this sort?

BILL BLACK: Oh first, it’s going to get much worse. They are going to actively seek to destroy this agency still. Obviously, they’re destroying its effectiveness. Then they’re going to turn around and say, “See, it doesn’t even stop problems. Why do we need it?” type of thing. So, it’s going to get worse. In truth, Elizabeth Warren structured it very carefully to keep it functional as long as there wasn’t something like a Donald Trump in office. Go figure.

SHARMINI PERIES: Bill, I thank you so much for joining us and always rather entertaining. Thank you.

United Technologies – Raytheon Merger Is the Definition of Crony Capitalism