Fear Mongering and Capitalism: A Recipe for Fascism? (1/2)

The effort to sell security to the people of the US is based on stoking irrational fears, something Trump has taken to new extremes, but which Democrats are guilty of as well, explains Charles Derber, who discusses his new book

The effort to sell security to the people of the US is based on stoking irrational fears, something Trump has taken to new extremes, but which Democrats are guilty of as well, explains Charles Derber, who discusses his new book

Fear Mongering and Capitalism: A Recipe for Fascism? 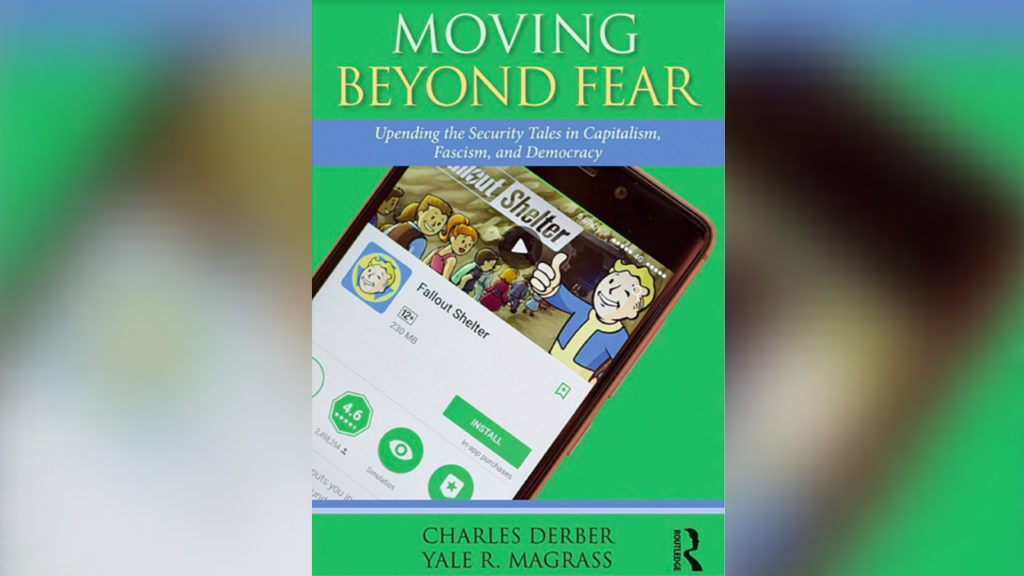 GREG WILPERT It’s The Real News Network and I’m Greg Wilpert in Baltimore. President Donald Trump is a fear monger and he uses this fear mongering to develop an increasingly authoritarian government that victimizes minorities and helps him and other members of the U.S. elite to consolidate their power. This is, in a nutshell, the starting thesis of a new book by Charles Derber and Yale Magrass titled Moving Beyond Fear: Upending the Security Tales in Capitalism, Fascism, and Democracy. Joining me now to discuss this book is one of the co-authors, Charles Derber. He is Professor of Sociology at Boston College and author of 21 other books, including one that I discussed with him last year called Welcome to the Revolution. Thanks, Charles, for joining me again.

CHARLES DERBER Thanks for having me again, Greg. Nice to see you.

GREG WILPERT So let’s start with the beginning of your argument that Trump tries to stoke fear. People who are critical of Trump generally have the sense about his approach towards immigration already, but where else does he do this and what purpose does this fear mongering serve?

CHARLES DERBER So I just want to say, it’s not just Trump. The United States has been both liberal and conservative. Presidents have used fear as a primary way to maintain the legitimacy of the existing order. It becomes particularly important when the economy runs into extreme, when masses of people are undergoing economic distress. As the level of wealth and income inequality grows, the whole dominant narrative of meritocracy that tends to be a legitimating idea in America, that this difference between the rich and the poor reflects natural differences in hard work and merit, but when the differences become extreme, that narrative loses credibility. People work very hard and they’re still not moving up. And then, the elites use the security narrative to cement their hold on the people who are losing ground economically by bringing them together and saying, we have to come together in our nationalist fervor to ward off threats to the United States as a country. It should be said that the threats are not only manufactured abroad. That is, there are foreign enemies that are stoked, but they’re also domestic. In the case of Trump, the domestic enemies usually include people of color, liberals of a variety of kind, leftists, socialists, you hear more and more about AOC and Bernie Sanders-style socialism, Black Lives Matter. The overall thrust is to make people feel that they depend on elites for safety, that nothing is more important than security, and that only the existing elites are capable of delivering that. And I think that is Trump’s primary way of using fear because people are already scared of their economic situation, of the social violence in the country, and so forth. And so, he can stoke this violence very effectively to develop what I call the “security narrative,” which is very dominant right now.

CHARLES DERBER Well the elites depend on it more because as inequality grows and as capitalism becomes more extreme, harsher as a tiny number of people cream off virtually all the wealth that’s being produced in the country, there becomes what Antonio Gramsci, the great Italian theorist talked about as a legitimation crisis. People ask the question, how can I stay? And if you think of capitalism as an upstairs-downstairs house, if all the wealth is moving upstairs, the people on the downstairs which is 90 percent or more of the population, begin to get anxious and wonder whether this house is a fair place, is a good place to be. And the only way that the elites in periods of harsh capitalism, that we’re seeing now with neoliberal global capitalism, is by shifting the grounds of the conversation and saying, what binds us together— forget about the difference between the upstairs and downstairs— we’re all Americans and we are a special community. This an argument that’s long been used by far-right political leaders. It was used in the thirties in Germany, it was used even before capitalist society by feudal lords, and so forth. When most people don’t have a good crack at a good life, they come to be vulnerable to a narrative that says, my worth is based on my connection to the people on top who have a divine or a special role to maintain the community of the nation as a special community, a racialized very often community. In the case of Hitler and now in Trump where I may not be rich, in fact, I may be struggling to survive economically, but I can feel good about myself because I’m part of this great nation, led by these wealthy people who often are seen as vested by God in maintaining the moral order. And so, capitalism as it evolves and becomes a monopolistic global system, depends more and more on this kind of security discourse that links people who are not doing well with a community of the nation that needs to be on guard and essentially in a dominant position around the world to ward off the threats to this special community.

GREG WILPERT That’s actually an issue I want to get to in a moment, but it seems something that’s very related in a sense— the issues of fascism, feudalism, and the idea of this being a protection racket of sorts. It reminds me also even of the mafia in that sense. It’s this idea that we will protect you and that’s what was the deal also with the lord towards the peasants. We will protect you, in exchange for your obedience essentially. So there seems to be a lot of parallels between these different structures. But I want to move on and ask you about how this fear and security narrative is, and you started talking about this, related to the rise of fascism. Do you see Trump’s evolution and that of the Republican Party heading towards fascism? And can you say more about how this might be moving in that direction?

CHARLES DERBER Well again, I want to caution against making Trump too distinct from the history of American elites. It’s been more focused, the far-right, in the Republican Party but since the end of the 60s, the New Right, the development of the Reagan revolution, this basic narrative of protection against a global evil that had to be combated by a global military power in the United States, it doesn’t start with Trump. In fact, Trump in some ways challenged that narrative. He said Iraq was a silly war. He wouldn’t have voted for all these silly wars, but of course he’s building up enormous military power and in the name of essentially protecting American values and American civilization and to keep American power invulnerable from all the threats that he described both internally in the United States and externally. So I just want to say, Trump should not in my view be seen as the first person who comes along, who has this parallel to fascists. We’ve had a far-right Republican Party and a pretty conservative Democratic Party since the end of the 1960s, when the corporate elites realized that the population really could as they saw in the 60s, mobilize to challenge their entire system. And so, in the early 70s you got the New Right, aligning itself with an evangelical base in the south and with corporate money and corporate elite throughout the Southwest and the North to come together. And so, I think this security narrative when Reagan developed the idea of the evil empire and that the United States had to develop an enormous global military domination. And you saw during that whole period of the Cold War, the security narrative completely take over the country. People poured trillions of dollars into military, into military intervention over basically corporate profit, but in the name of protecting the population. Trump’s in that sense simply a more naked empire. He’s less subtle about it. He’s more blatantly racist in the way hates evil. The focus on immigration is more intense and the virtue of immigration— it’s worth noting that Hitler, when you read Mein Kampf, Hitler talked a lot about immigrants and he saw them as a real threat. These were Africans who were coming into Germany, others who were seen as a threat to the purity of the German nation and the German race. And I think immigration now, Trump has really highlighted in concert with immigration waves across Europe and the United States, as the central threat because it’s both a foreign threat, a civilizational threat that Latinos and brown people along with blacks faced the United States. And it’s like immigrants are both external and internal. It’s really important to say the security narrative tries to separate the downstairs— the true Americans, the true Germans— from the impostors, the people who need to be purged from inside the country— in this case, illegal immigrants, people of color. So there is a construction of fear and of enemies outside and inside that can only be challenged and defeated when white working people in this country come together with the people who are actually disempowering them, taking away their prospects for a good life, but in the name of preserving the culture of the nation and preserving their dominance over these terrible enemies abroad and at home.

GREG WILPERT We’re going to conclude part one of our interview with Professor Charles Derber. Join me for part two. In the next segment, we will discuss the issue of what can be done.