Fred Branfman: US policy should be to help develop Pakistan

Fred Branfman: US policy should be to help develop Pakistan 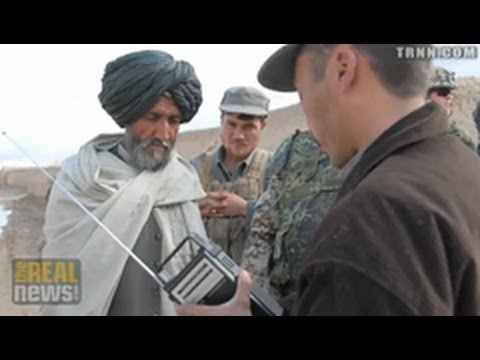 In the early 1970s, Fred Branfman, a journalist, exposed the American secret war in Laos. His articles appeared in The New York Times, The Washington Post, Harpers, The New Republic. He’s now been writing recently on U.S. policy towards Pakistan in places like Salon and Truthdig and AlterNet. And he now joins us from Santa Barbara to discuss U.S. policy towards Pakistan. Thanks for joining us, Fred.

JAY: So, Fred, when President Obama, near the beginning of his presidency, and whenever he would talk about his grand strategy for solving the Afghan War, it all was based on better relations with Pakistan, a civilian surge in Afghanistan, but also in Pakistan, where more focus would be put on bettering peoples lives in the border areas with Afghanistan. It was also about developing more friendship between Pakistan and India and engaging Pakistan in solving the Afghan crisis. How’s that working for him?

JAY: And of course there was the recent incident of the Pakistani soldiers that were killed by American aircraft and a very profound deterioration of the relations. What is happening recently in terms of this?

BRANFMAN: Well, the fundamental problem is that these drone strikes have alienated the population of Pakistan, as I said. And according to the Long War Journal, which is a right-wing operation very close to the Pentagon, we’ve only killed 68 al-Qaeda and Taliban leaders who we can name out of the 2,400 people we’ve killed there through our drone strikes, which means that only 97 percent of the people we’ve killed with the drone strikes we cannot name. The drone operators refer to them as squirters. In return for killing only 68 senior al-Qaeda and Taliban leaders, who of course can be easily replaced out of a population of 27 million Pashtuns in Pakistan alone, often with more competent leaders, we’ve managed to alienate the population of Pakistan, as I mentioned, which ambassador Anne Patterson, our former U.S. ambassador, gave as the main reason why the Pakistani government is refusing to cooperate with us on either nuclear proliferation or safeguarding their nuclear materials. Their nuclear stockpile is the world’s fastest-growing and the least secure, according to the Harvard Belfer Center and former U.S. Senators Sam Nunn’s nuclear threat initiative. And Patterson specifically said that she’s very worried that nuclear materials could fall into the hands of terrorists. But because of the drone strikes, because of our killing Pakistani citizens, the government is refusing to cooperate with us. Not only that, but as a result of our drone strikes, we are destabilizing the government of Pakistan to the point where The New York Times has speculated that it could be a military coup by anti-U.S. junior military officers in Pakistan, which, as I mentioned, has nuclear weapons. We’re so worried about Iran someday requiring nuclear weapons, but in Pakistan we’re running the risk that people who hate us could take over the government there. Thirdly, as a result of our drone strikes, our enemies are actually increasing in number. The Pakistan Taliban is not only four to five times larger, but the Pakistani intelligence agency about a year ago issued a report saying that there were bigger threat to Pakistan than ever. And, of course, as a result of our alienating the people of Pakistan, they are slowing down our ability to supply our troops in Afghanistan. This is a major strategic catastrophe on the order of our support of the Shah of Iran. So to sum it up, on the one hand, we justify killing several thousand people in Pakistan with our drones, with our ground assassinations, with our troops, on the grounds of national security. But the truth is that the people running our foreign-policyâ€”I would include president Obama, Hillary Clinton, our Secretary of Stateâ€”have no idea what they are doing. They are actually harming U.S. national security. They are exponentially increasing the numbers of people who want to kill Americans. They’re destabilizing the critical country Pakistan. And they’re making cooperation on Afghanistan or securing nuclear weapons or anything else impossible.

JAY: Now, Pakistan’s hands aren’t completely clean in all of thisâ€”I should say the Pakistan military, which is pretty close to a military dictatorship with a civilian cover, anyway. But the accusations that have been made that Pakistan’s think I’ve doubled in here, which is, you know, to some extent cooperating with the U.S. On the other hand, the Taliban historically was a tool of the ISI in Afghanistan, and as many people think, still part of the strategy of Pakistan to maintain its influence in Afghanistan. But I guess if your starting point is you’ve got to have U.S. troops in Afghanistan, you’re left with a bunch of lousy choices. I guess the real question is: was the U.S. doing in Afghanistan now?

BRANFMAN: Exactly. Sen. John Kerry, the head of the U.S. Senate Foreign Relations Committee, properly called Afghanistan a sideshow. And what we are allowingâ€”Afghanistan has only 30 million people. Pakistan has 180 million people. Afghanistan has no nuclear weapons. Pakistan has many nuclear weapons. What we are allowing is the Afghan tail to run with the Pakistani dog. And our priorities are exactly opposite. We should neverâ€”we should have pulled out of Afghanistan long ago if we want to wage our war in Afghanistan. We certainly should not have extended it into Pakistan. And the main architect of that policy was General Petraeus, who is still enjoying a lot of credit in the U.S. because of the perceived success of his Iraqi surge. What is notâ€”has been discussed is that he’s been a catastrophe as a military commander in both Pakistan and Afghanistan. And the basic problem of our foreign policy today is that those running itâ€”and, by the way, as bad as the Democrats are, Newt Gingrich and Mitt Romney would make it even worse. They want toâ€”news has already said he would appoint John Bolton as Secretary of State, who has been fomenting war against Iran and certainly wants to expand what we are doing in Afghanistan and Pakistan, as result of this policy, we are far weaker. Much more likely that there’s going to be the more 9/11s in the U.S. over the next decade because of the irrationality of the United States government taking on the entire Muslim world. Basically we not only extended these drone strikes into Afghanistan, but we are now conducting them in Yemen and Somalia. We have the first time in our history a team of 75,000 U.S. assassins, called the Joint Special Operations Command, who are operating in 75 countries, conducting illegal and criminal assassinations, and all of this is making us less secure.

JAY: How do we know those numbers to be true?

BRANFMAN: Well, it’s been reported in The Wall Street Journal. It’s been reported in The Guardian. It’s been widely reported that there are 75,000 members of the U.S. Joint Special Operations Command. And you’ll remember that when we killed Osama bin Laden, it was these people, the Joint Special Operations Command, that conducted the assassination. And a New Yorker story about two months later, discussing the operation, a senior U.S. Defense Department official said, you got to understand, the Osama bin Laden assassination attracted a great deal of publicity, but we killed over 2,000 people, we’ve assassinated over 2,000 people with the Joint Special Operations Command. The quote was, "it’s like mowing the lawn", unquote.

JAY: So briefly, what should U.S. policy be toward Pakistan?

BRANFMAN: Very simple. Prime Minister Gillani has said that his top priority for his country is extending the grid to give electricity to every Pakistani. Most Pakistanis to this date do not have electricity in the rural areas. We should stop our drone strikes immediately. We should stop our incursions into Pakistani territory, and we should make a major focus on extending the electric grid and other key infrastructure investments. If sixty-nine percent of the Pakistani people regard us as their friend instead of their enemy, then their government would be able to cooperate with us on safeguarding their nuclear materials, and they would also be much more willing to help us go after al-Qaeda and other terrorists who are generally threatening the United States.

Fred Branfman (1942-2014) was an American anti-war activist and author of a number of books about the Vietnam War. He brought the secret U.S. bombing of Laos to world attention in 1969. He has published a dozen articles on present U.S. secret war-making in the Muslim world. And his book, Voices from the Plain of…