Is Obama’s Trip to Africa about Investment or the Extraction of African Resources?

Emira Woods: Obama administration needs a new approach to trade and investment and should move away from policies that favor the extraction of African resources and the militarization of the continent

Emira Woods: Obama administration needs a new approach to trade and investment and should move away from policies that favor the extraction of African resources and the militarization of the continent 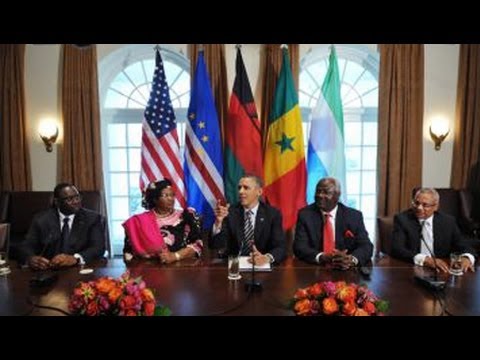 President Obama is making another historic trip to the African continent. This is his first trip in his second term, where he will be visiting Senegal, South Africa, and Tanzania. The White House is saying that the president will be focused on trade and investment, but longtime African analyst Emira Woods says that such policies go hand-in-hand with militarization and extracting African resources.

Emira Woods is a codirector of Foreign Policy in Focus at the Institute for Policy Studies. She is the chair of the board of Africa Action and serves on the board of the Association of Concerned Africa Scholars. She’s also a member of the American Board Association Rule of Law Initiative Africa Council.

Thank you for joining us, Emira.

EMIRA WOODS, CODIRECTOR, FOREIGN POLICY IN FOCUS, IPS: Pleasure to be with you.

DESVARIEUX: So, Emira, let’s first start off with what the president has on his agenda. The White House says that it’s mostly about trade and investment. But you’re saying that there’s also these underlining issues that go hand-in-hand with such policies. Can you elaborate more?

WOODS: Well, Jessica, trade and investment has happened with the Africa continent for quite some time, and, you know, from the days of slavery, really. But today, as you look at the global economy, the key issues, the key ingredients on which the global economy survives are being sourced from Africa. So whether it’s oil or gas or uranium, these key resources, oil, gas, and mining, end up being the dominant factor in trade with Africa and the U.S., as well as other countries throughout the world. So trade and investment is not necessarily a new phenomenon when it comes to Africa.

I think clearly what is needed now is trade and investment that doesn’t just continue the status quo but actually provides bold leadership to ensure that communities on whose land resources lie are actually benefiting from investment and trade practices, that small- and medium-size enterprises are able to benefit, that labor rights and environmental protection standards are actually built into any efforts to expand areas of trade and investment with Africa. I think what is needed is just a whole new vision of how the U.S. engages with the continent and not just business as usual.

DESVARIEUX: Well, let’s talk about some of the policies that they’ve already enacted. At last year’s G8 summit, there was the New Alliance for Food Security and Nutrition. Can you just discuss a little bit about this policy? How much money are we talking about? What’s at stake here? And how is this part of this whole problem with the same sort of initiatives being repeated in Africa’s colonial past we’re seeing here in modern-day society?

WOODS: Well, I think a lot of concerns are being raised in Africa around this question of food sovereignty to ensure that people in communities throughout the continent–70 percent of the continent is reliant on agriculture and lives in the rural areas–and to ensure that people are actually benefiting from the resources on their land. So it sounds great when we think about this new alliance for food. You know, increasing yields, increasing productivity all sound fantastic. But if you look beyond the mask, beyond the title, what you recognize is that, you know, throughout the continent there has been this push now for the appropriation of Africa’s land. Africa continues to enjoy much of the last remaining arable land on this planet. And so what you have is what many are calling a land grab that’s underway, where U.S. and other foreign investors–it’s not just U.S.; it’s China, it’s Saudi Arabia, it’s a number of countries now that are investing in land in Africa.

And two of the issues. First, you know, often it’s communities that have been longtime residents of this land, you know, being now tossed off their ancestral lands, being forced out of farmlands and out of the rural areas altogether. I think the second concern is around biofuel production and the appropriation of land for really growing biofuels to feed cars, you know, as opposed to growing food to feed people.

And, of course, the third concern is around genetically modified organisms, GMOs, and efforts by particularly U.S. agribusiness companies to expand their production of genetically modified foods. I think the concerns are often that small- and medium-size farmers, their practices to actually feed their families, their communities, their region will be pushed aside as large agribusiness firms, particularly U.S. and European companies, swoop in in efforts to appropriate land for large-scale agricultural production that can feed the interest of U.S. particularly biofuel industries and others outside of Africa.

DESVARIEUX: So let’s talk a little bit about President Obama and what sort of grade you would give him in terms of his policies in Africa, being that he is the first African-American U.S. president. What sort of grade would you give him, number one? And how are you perceiving there being–the mood there on the continent from the image that President Obama had in his first term compared to here in his second term? Are we seeing a shift there?

WOODS: Jessica, I think I would have made a terrible teacher, because for me grading can be hard. I think I would probably take an average of a C if I were to give an honest assessment today.

I think there was tremendous excitement when President Obama took office. It was, after after all, a son of Africa rising to the highest office on the planet to be president of the United States and in the White House, a great degree of high expectations and true joy that that historic marker had been made at long last.

But I think since then a lot of that joy has been replaced, really, by a sense of, well, there has been a change in the presidency in the United States, but there is still very much a continuation of programs established under the Bush administration, programs like the U.S. Africa Command, AFRICOM, which many see as a militarization of U.S. engagement with Africa. You know, it started under Bush and really continued and strengthened under Obama, and a sense of frustration, maybe the limitations of the presidency, perhaps, but also the dominance of forces that are really interested in maintaining the status quo.

And I think that now creates a mixed reaction where there are some that are still applauding that Obama is carving out time early in the second term to go to Africa, understanding the significance of Africa’s, you know, over 1 billion people on the rise, largely young people, who are engaged in vibrant technologies and in a range of activities on the continent. And some are applauding the opportunities to spotlight that through a presidential visit to Africa. You know. But there is still a bit of concern and actual resentment that the high hopes have been really dashed because there has not been the bold leadership needed to actually change the status quo of how the U.S. engages with Africa to create a truly mutually beneficial relationship where Africa’s rise is actually supported and bolstered by a visionary U.S. leadership from the White House and beyond.

DESVARIEUX: Well, thank you so much for joining us, Emira.

Emira Woods is a co-director of Foreign Policy In Focus at the Institute for Policy Studies. Ms. Woods is chair of the Board of Africa Action and serves on the Board of the Association of Concerned Africa Scholars. She is also a member of the American Bar Association Rule of Law Initiative Africa Council.