The Legacy of Colonialism in Central African Republic

Emira Woods: Not much has changed since the country became independent from France in 1960, as resources remain under the control of external actors, particularly multinational mining corporations (2/2)

Emira Woods: Not much has changed since the country became independent from France in 1960, as resources remain under the control of external actors, particularly multinational mining corporations (2/2) 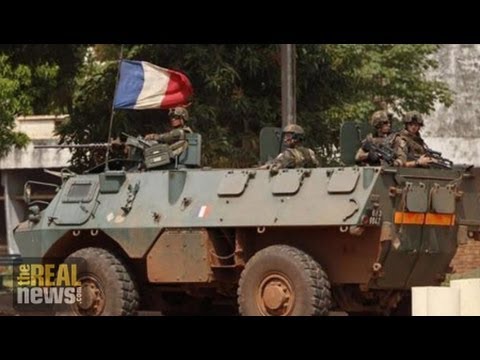 This is part two of our interview about the turmoil in the Central African Republic.

We’re now joined with our guest Emira Woods. She is the codirector of Foreign Policy in Focus at the Institute for Policy Studies.

Thanks for joining us, Emira.

EMIRA WOODS, CODIRECTOR, FOREIGN POLICY IN FOCUS, IPS: Great to be with you, Jessica.

DESVARIEUX: So, Emira, we have almost 1 million people, or a quarter of the population there in the Central African Republic that’s been displaced by fighting. Can you give us some historical context into how the country got to this point?

WOODS: Well, I think we have to go back to the colonial history and understand the severe legacies of colonialism in Africa. And in the case of Central African Republic, the colonial power was France. And France ruled, really, you know, essentially by pitting one ethnicity against the other. So, you know, there are some roots to real concerns that parts of the country, from the times of colonialism till post colonialism, remained underdeveloped, remained without the essential services–roads, you know, hard to find in certain parts of the country. So there is a legacy of colonial powers extracting resources and really making sure that those resources go for the interests of the external actors, particularly multinational corporations that are active in mining, have been active in mining in Central African Republic for decades, and really rendering the people on the land invisible.

DESVARIEUX: Alright. Let’s fast forward a little bit to 1960, when they get their independence.

WOODS: So you had independence and you had, basically, from independence until today, you know, one institution was pretty much strengthened, which is the security sector, often. It is the military. The heavy hand of the military is often the strongest tool in the government’s toolkit post-colonialism. And so, what you have had were coups and counter coups. From 1960 till today, you have had essentially one democratically elected government in the Central African Republic. So there has not been an opportunity for real democracy, for the will of the people to be heard.

And so I think what you have had are interests of external actors, often the same colonial powers and the corporations that they support, essentially dictating the terms of what happens on the ground in places like the Central African Republic. And what has happened is you have had France picking sides, supporting leader after leader, and at a certain point. And essentially a year ago, when there was a coup, the president thought he could go to France and France would be able to help him maintain power. That did not happen.

There were other interests at play in accessing and controlling, particularly, new oil discoveries in the Central African Republic. And so what you have had was a quick ouster of the president, the rebel leader essentially instituting himself as president, until things essentially broke down, and you had a parliament, a legislature standing up just this past month, demanding a path to peace and essentially implementing a new road map, which brought a woman, elected president, to the Central African Republic. She had been the mayor of the capital city, was seen as someone that all sides could trust, could respect, and could actually follow in terms of a capable leader.

So what we had was an interim process that has what many say: a lot of credibility and legitimacy. But it will be tested. And the question will be to what extent the international community can support this new, you know, presidency, to what extent can there be an opportunity for there to be a clear path for humanitarian assistance, for a return of real rule of law, for also a return of services, like education, where people can send their kids to school again in the Central African Republic and not have to live in internally displaced people’s camps, for example. So there is a lot at stake.

And the question is: can the real negative history of seeking the interests of outsiders, particularly colonial powers, can that be turned around so that those vital resources now found in the Central African Republic–the oil, the uranium, the gold–can be directed at actually improving the conditions of people’s lives there on the ground, can be directed at building a healthy set of communities throughout the country that can then have a path towards not only decent lives, but towards political as well as economic stability for years to come.

DESVARIEUX: I’m glad that you mentioned the international community really protecting these corporations. Can you be more specific? Can you give us specific examples of the corporations that they’re protecting?

DESVARIEUX: Alright. Emira Woods, always a pleasure having you on.

WOODS: No, the pleasure is mine. Thank you.

Emira Woods is a co-director of Foreign Policy In Focus at the Institute for Policy Studies. Ms. Woods is chair of the Board of Africa Action and serves on the Board of the Association of Concerned Africa Scholars. She is also a member of the American Bar Association Rule of Law Initiative Africa Council.