US tries to create an ‘iron curtain’ around Russia

President Dimitri Medvedev criticized the European Union for having a biased approach in regards to the Georgian conflict. Medvedev however stated that the EU acted in a rational manner by not implementing sanctions against the Russian Federation. F William Engdahl believes the EU response mirrors its dependence on Russian oil and gas. Engdahl goes on to further state that the US provoked Russia to respond militarily and the US as the dominant power is beginning to stumble and "to look desperately for ways to hold on to that power."

President Dimitri Medvedev criticized the European Union for having a biased approach in regards to the Georgian conflict. Medvedev however stated that the EU acted in a rational manner by not implementing sanctions against the Russian Federation. F William Engdahl believes the EU response mirrors its dependence on Russian oil and gas. Engdahl goes on to further state that the US provoked Russia to respond militarily and the US as the dominant power is beginning to stumble and "to look desperately for ways to hold on to that power." 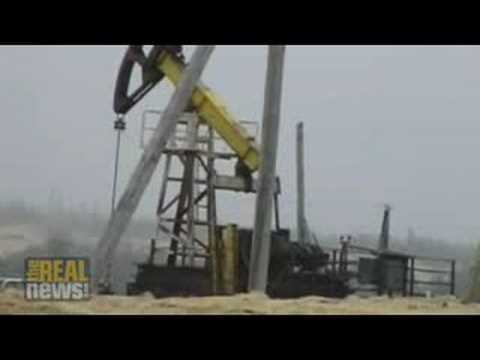 ZAA NKWETA: Russian President Dmitry Medvedev criticized the European Union for what he called biased statements on the Georgian conflict.

NKWETA: The statement follows the EU summit meeting held in Brussels on Monday, in which talks on a new partnership deal over the war in Georgia were put off. The EU decision was widely seen as a slap on the wrist for Moscow.

F. WILLIAM ENGDAHL, AUTHOR AND POLITICAL ECONOMIST: The European Union is in a far different position from Washington on this Georgia business. It’s clear from the background to US military involvement in Georgia, oh, since 2002, that Washington wanted to set a trap or set a provocation that would force Russia into a situation where she had to respond militarily or else face a catastrophic collapse of confidence in all of Central Europe. And by doing that, the prime goal of Washington in this situation is to create a new iron curtain dividing Western Europe, especially Germany, France, and Italy, but most especially Germany from Russia. And the economic cooperation that was beginning to emerge across Eurasia, from China to Russia, on the level of energy and economic cooperation there, the natural gas and oil supplies to the German economy are absolutely vital. And that was creating a situation where Europe was schizophrenic. The European elites are divided on having peaceful relations with Russia or to try to simply follow as a lackey everything that Washington has as an agenda. And it’s really exposed those fault lines very, very deeply. The reason you have no sanctions is the fault line energy. Europe, especially Germany, and to a lesser extent Italy and France, are dependent—43 percent of German natural gas comes from Siberian/Russian gas fields. And not only that, the supplies are increasing dramatically over the next five or six years, as a undersea pipeline and the Nord Stream Project gets completed. The Russian economy has become a major source of capital investment for German industry, building factories. And since Putin came in in 1997, Russia has rebuilt its finances; it’s come out of its debt; it’s paid off all its IMF monetary fund loans, so it’s not beholden to any kind of blackmail pressure on foreign loans to the World Bank or the IMF; and it has the third-largest foreign currency reserves of any country in the world—China, Japan, and number three is Russia with about a half a trillion dollars. Most of that is probably in US treasury bonds and bills. So if the US gets too outrageous, I suppose the Russians would have no choice but to reinvest some of those US treasury bonds into European or other securities, and that would have a very unhappy effect on the US economy. So there are fault lines on this all over. I think the main point is that the US, with its economic basis slipping badly, its economy tanking for probably the next—European economists who follow closely tell me, at least the next decade, the US economy can expect to be in a deep recession or, actually, I call it a depression. That is not a strong basis of projecting global power. Really, we’re in one of those terminal moments that perhaps comes along once in a century, where you have a dominant power on the planet really beginning to teeter and look desperately for ways to hold onto that power—and other groupings of nations and regions are beginning to assert themselves in that power vacuum—as the British Empire was between 1914 and 1945. It was on its last legs as an empire that could control the dominant places in the world, but it had not yet admitted that. I think the American establishment is in a state of psychological denial about that reality. If they could look at it square in the face, I think the United States and the world would be a lot healthier for it.