The economic meltdown on Wall Street has sent shockwaves across the globe. Political economist William Engdahl believes the "US faces an economic depression that will be worse than the Great Depression of the 1930's." He goes on to state that "European goverments are furious at the corruption and fraud that has come out of the New York financial community."

The economic meltdown on Wall Street has sent shockwaves across the globe. Political economist William Engdahl believes the "US faces an economic depression that will be worse than the Great Depression of the 1930's." He goes on to state that "European goverments are furious at the corruption and fraud that has come out of the New York financial community." 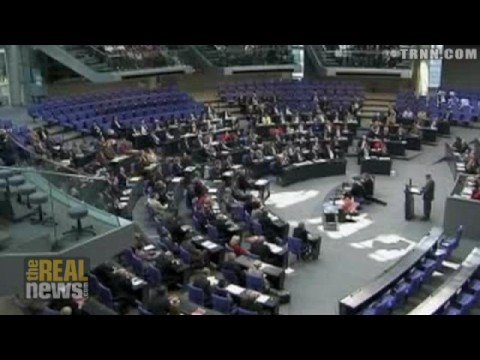 ZAA NKWETA, TRNN: The US economic meltdown has sent shock waves around the globe. European markets are no exception. The Real News spoke to author and economist William Engdahl about the trouble on Wall Street and the European perspective.

WILLIAM ENGDAHL, AUTHOR AND POLITICAL ECONOMIST: The United States economy is going to go through a hell that’s begun already that’s going to be worse than the Great Depression of the 1930s. Goldman Sachs’ Paulson is appointed Treasury Secretary to bail out Wall Street and his cronies—this is the real crony capitalism—to bail out his cronies in the financial community with taxpayer money after they’ve looted the coffers dry in the first place with the huge profits on the real estate securitization—asset-backed mortgages and so forth. This whole multi-trillion dollar charade has just blown sky-high. Nobody knows what they’re holding in terms of [paper assets]. Absolute madness. It’s been supported by the chairman of the Federal Reserve Alan Greenspan; it’s been supported by Wall Street. What I can say about the European reaction—and this is unprecedented—the German finance minister got up in the Parliament ten days ago and said, "This is the end of America as the world’s financial superpower." We are going to see a whole series of regional financial centers emerge out of this crisis, but never again will America maintain that status as the sole financial center of innovation in the world. They are privately furious. I heard them comment [on] banking events over the recent months. They are absolutely furious at the corruption and fraud that’s come out of the New York financial community, selling as triple-A rated securities to European banks something that is now properly named toxic waste. So they regard the American financial system is not worth to be trusted to walk your dog across the street, to put it bluntly. So I don’t see any interest on the European side in a dramatic response to this, but I think they are going to take measures of self-defense and self-survival that will in effect gradually, or maybe even dramatically, draw the covered wagons around the Eurozone. After all, Europe has a common currency in 13 of the countries of the 27 members of the European Union, it has a common economic and trade zone with 27 countries, including most of Eastern Europe, and it has very, very strong economic ties with Russia and China. [In] the little country of Iceland, in the Arctic, a few weeks ago the banking system blew sky-high because the Icelandic banks, they got a little bit suckered into the Wall Street mania of securitization in the last six or seven years, and the Icelandic banks just went overboard on a buying spree, borrowing money short and lending long. Now, that collapse in the US banking system has brought the Icelandic banking system to its knees. The three banks have to be nationalized. They have one problem compared with German or French or other banks or US banks: all of their liabilities are in American dollars, and they don’t have dollars in the central bank, so they can’t even rescue their banks if they wanted to, because they don’t have the dollars. In steps, Prime Minister Vladimir Putin and President Medvedev from Russia last week and tells [sic] the prime minister of Iceland, "We will help you out in your time of need. We’re going to lend you a €4 billion credit—that’s about $5.4 billion US dollars—to the government to stabilize their financial system." Well, they’re the only major country that’s stepped forward to help little Iceland. Iceland has one very interesting feature: it’s a strategic piece of rock in the middle of the ocean that was used by the United States. Keflavik Airbase was used during the Cold War as a major basing point against any potential Russian nuclear strike on the US over the North Pole. And that is going to have a potential effect on the Iceland orientation, as a NATO country, toward NATO. So in a sense the view is emerging in Europe, and no one is to blame about this except for the foolish policies of the New York financial community and of Washington in the last 8 or 10 years. They’re of the mind, "Well, do we really need the United States of America to dictate everything that we do and bring us down the hole along with them?" And I think we’re at a once-in-a-century kind of a phase shift in attitude here.