In one of his last interviews before leaving office, host Abby Martin talks to Ecuador's President Rafael Correa about Trump, the global crisis of inequality, CIA plots and opposition in his own country. teleSUR

In one of his last interviews before leaving office, host Abby Martin talks to Ecuador's President Rafael Correa about Trump, the global crisis of inequality, CIA plots and opposition in his own country. teleSUR 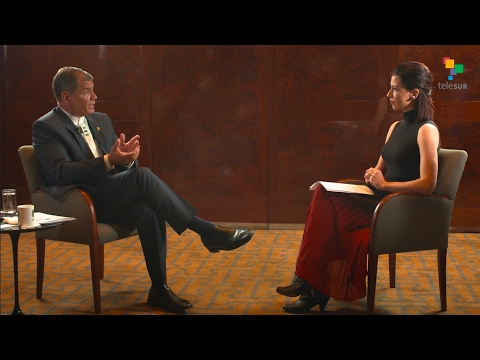 ABBY MARTIN: Until 2007 Ecuador had been defined by corruption, political turmoil, and economic disaster. Mass protests and controversy forced seven presidents to resign in a span of only 10 years. A shocking one in ten Ecuadorians fled this disaster zone of neo-liberalism. A mass movement known as the Citizens Revolution brought to power a leftist economist, Rafael Correa, in 2007. Under his administration the country went through major shifts, making significant advancements for poor and working class people. Poverty decreased 38%, and extreme poverty was nearly cut in half. Government spending on social services doubled, including a 100% increase in healthcare spending, as well as major increases in education and housing. Minimum wage increased, accounting for inflation by 48%. The Correa government also stood up to the US Empire by kicking out the International Monetary Fund, closing a major US military base on Ecuador’s coast, and giving political asylum to WikiLeaks’ Julian Assange.

But now, after serving three consecutive terms, President Correa’s time in office has come to an end. In one of his last interviews as president, I spoke to him at the United Nations compound in New York City about his legacy, his critics, and the future of Ecuador.

So nearly 10 years ago you took office. Ecuador was facing a wide variety of economic, social problems. You came in with a very ambitious program carried out by a citizens’ revolution. Do you feel like you accomplished this?

ABBY MARTIN: And there are undeniable achievements, of course, from far-reaching social programs to a significant reduction in poverty. What do you feel looking back was the greatest change that you implemented in Ecuador?

ABBY MARTIN: What do you wish you had more time to implement?

ABBY MARTIN: You were elected as a vocal critic of neo-liberalism, of course. This ideology is vehemently defended by Western powers and big capitalists in Ecuador. How do you think your economic model has disproven their economic model?

ABBY MARTIN: US government officials always tell us every time there’s a problem in Latin America, “Oh, that’s because it’s socialism”, right? They always blame socialism for problems in Latin America when there’s economic problems. What’s your response to that?

ABBY MARTIN: And of course, there’s been some controversy over cracking down on NGOs. Your government says that NGOs are used as a conduit for foreign interference in elections. How do you respond to Western media, and of course opposition critics within your country who say NGOs, cracking down on certain media outlets, restricting NGOs, actually signifies that Ecuador is failing on human rights?

ABBY MARTIN: True. USAID, National Endowment for Democracy – these organizations work throughout Latin America to do just that. The new constitution that you introduced had a bold measure that granted, for the first time in history, rights to nature. That is incredible. I mean, what made you so passionate about setting that standard for the rest of the world?

ABBY MARTIN: A hallmark of your administration was, of course, reclaiming independence over Ecuador’s natural resources and using them to fund major social programs. But, of course, continuing to extract resources such as oil leads to a host of economic, environmental and, of course, political problems, as we’ve seen. What is your long-term view of this development strategy?

ABBY MARTIN: Last time we spoke – it was before the US election – you told me that Trump’s victory would be bad for America, of course, but potentially better for Latin America as a whole, as a region. Because, like under Bush, Latin America could be emboldened in a more progressive move. Do you still feel optimistic about the region becoming more progressive under Trump?

ABBY MARTIN: And there are 700,000 Ecuadorian citizens living in the United States. Of course, many of whom are undocumented workers. Trump has bellicose rhetoric. He’s been very, very vocal and vowing to deport millions of Latino immigrants. Do you have a message for those communities that might be affected.

ABBY MARTIN: And you just proposed a policy in Ecuador that actually is kind of encompassing the opposite of what Trump says about immigrants. You say that no human being is illegal. Talk about that measure.

ABBY MARTIN: Absolutely. Mr. President, you’ve put Ecuador on a very different path than it ever has been in history. Away from colonial bondage toward equality, toward independence. What must citizens in Ecuador do for the years and decades to come to continue the nation on that path?

November 8, 2017
Sign Up for Our Newsletter
Help Us Make Real News!