Students in Tucson, Arizona take over school board meeting to prevent controversial vote

Students in Tucson, Arizona take over school board meeting to prevent controversial vote 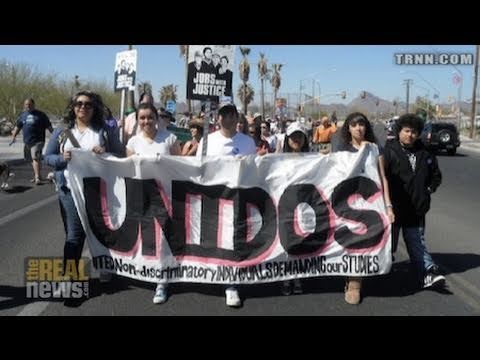 DAVID DOUGHERTY, TRNN: Students in Tucson, Arizona, took over a local school board meeting in order to prevent a controversial vote from taking place on the school district’s ethnic studies program. Seven current Tucson high school students and two high school alumni chained themselves to the board chairs as a large crowd occupied the meeting room and held a rally. Tucson’s Unified School District has become a focal point in Arizona’s heated debate over the future of its Mexican-American studies program, after House Bill 2281 banning ethnic studies in public schools was passed–a week after the passage of the notorious anti-immigration bill SB 1070. The action on Tuesday the 26th was planned by the student group UNIDOS, or United as Non-discriminatory Individuals Demanding Our Studies, comprised mostly of Tucson high school students and alumni. Elisa Meza, an organizer with UNIDOS who participated in the occupation, explains some of the pressures that contributed to the students’ decision to intervene in the meeting.

ELISA MEZA, ORGANIZER, UNIDOS: Since February, we’ve been just put on the backburner, kind of put away. We attend every school board meeting, and each time, we always go to the call to the audience and we always address them. We have asked for meetings with them. And we’ve done civil discourse. We’ve done that. We’ve done it peacefully. And it seems, each time, that it just goes in one ear and out the other. On April 26, the Tucson Unified School District wanted to pass a resolution that called for making Mexican-American studies courses elective courses instead of the core credited courses that they originally accounted for and currently account for. This resolution was very, very last-minute on their part, and it was completely against the stances that they’ve come out against HB 2281. And they claimed that it had nothing to do with the bill against ethnic studies. And the resolution was going to be voted on, and as we knew prior, that three of the five board members were going to vote for the resolution to be passed, and only two of them were in support of us. So we were aware completely that if we didn’t stop the vote from happening, that the classes would be turned into elective courses that wouldn’t have been able to count as a core credit upon graduation for the students at the high schools.

DOUGHERTY: There are concerns that if the ethnic studies program in Tucson were to become an elective course rather than a core credit course, it would be more difficult for students who need credit to graduate to take the classes, and that they could also be subject to proposed budget cuts in education that target elective courses. Former schools chief and current attorney general Tom Horne introduced HB 2281 last year. The law prohibits courses that promote the overthrow of the United States government, promote resentment toward a race or class of people, are designed primarily for pupils of a particular ethnic group, and advocate ethnic solidarity instead of the treatment of pupils as individuals. Current superintendent of Arizona public schools John Huppenthal has initiated a costly $170,000 audit of the Tucson Unified School District to determine if its Mexican-American studies program violates the new law, which could put 10 percent of the district’s monthly funding at risk. There have been no similar proposals to change the status of core European history courses, while Tucson’s Mexican-American La Raza studies program is considered by many to be a success, as demonstrated by impressive graduation and college attendance rates for course alumni in schools with higher dropout rates. A lawsuit has been filed questioning the constitutionality of HB 2281, while students from UNIDOS also questioned the legality of the school board’s actions when they presented their own resolution during the occupation.

LEILANI CLARK: We want full compliance with our civil and human rights. The ban on ethnic studies is unconstitutional, dehumanizing, and is a violation of our human rights. According to Article 31 of the United Nations Declaration of the Rights of Indigenous Peoples of 2007, we have the right to maintain, control, protect, and develop our cultural heritage, traditional knowledge, and traditional cultural expressions.

DOUGHERTY: Dr. Cornel West has referred to Tucson as the "epicenter of the new civil rights movement", as comparisons are being made between Arizona and earlier struggles in the United States against racism and inequality.

MEZA: It’s the simple notion that they are scared of a population they are trying to push down. They’re scared of us empowering ourselves intellectually. This is the most successful program in all of TUSD’s history. It’s the only ethnic studies department in the entire nation in public schools that have had this much success and that are still in effect and have the most beautiful faculty to support it. And because it is a research-based program, it is substantial, it’s intellectually substantial to this community. It is completely locally relevant. And to have that relevance in a city of Arizona that has so much history with border conflict and private prisons and migra going everywhere and invading our streets and raiding our homes, that it is no joke that this is just disempowerment of knowledge that we need to face what is happening politically in every other aspect of migrants rights, undocumented rights, and everything. So it’s just a piece of this racism.

DOUGHERTY: A wave of anti-immigration legislation has been introduced in a number of states in recent months, many laws mirroring Arizona’s SB 1070, in spite of the fact that the law was found to be unconstitutional in federal court. Many states are also proposing profound changes to the public education system, with proposed privatization initiatives and a series of budget cuts that could have serious implications on the future of other ethnic studies programs like the Mexican-American studies program in Tucson.

MEZA: If the nation has anything to learn from this, it’s that Arizona is the beginning point of something sinister, something almost viral that can happen, and SB 1070 was the perfect example of that, in how quick other legislators grabbed a hold of this idea. And as legislatures across the country figured out that–how quick they can get away with it right under our noses, HB 2281 happened in education. Arizona is authoritarian, and unless we fix that, unless we stop fearing it, then for the future nothing else will change.

DOUGHERTY: The Tucson Unified School District meeting over the future of its Mexican American Studies program was rescheduled for May 5, but then later moved to Tuesday, May 3, following public anger over the significance of scheduling the meeting on the Cinco de Mayo holiday. Authorities have announced that a number of heightened security measures will be in effect during the meeting. The youth of UNIDOS have vowed to continue their struggle to protect what they feel is a critical resource for their schools and communities. This is David Doghourty with The Real News Network.

Elisa Meza is a student at the University of Arizona studying English and Mexican American Studies. She is currently a youth organizer with UNIDOS in Tucson, Arizona and an editorial writer for her university’s paper, the Arizona Daily Wildcat.

The Homeless in Mortal Danger During Southwest Heatwave

Workers in Heat Waves Face Dangerous Exposure in the US Southwest