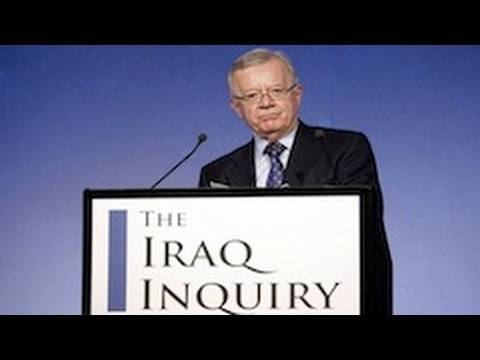 PAUL JAY, SENIOR EDITOR, TRNN: Welcome back to The Real News Network. I’m Paul Jay. In London over the last few weeks, the inquiry into the Iraq War has continued. Eliza Manningham-Buller [is] the former director of MI5, which is roughly Britain’s equivalent to, like, the FBI, maybe RCMP in Canada, and she was the head of it from 2002 to 2007. The Christian Science Monitor reports that she’s harshly criticized the 2003 invasion of Iraq, saying Tuesday that her spy agency warned that Saddam Hussein had no known links to al-Qaeda, that Iraq posed little threat, and that some in a generation of British Muslims had been radicalized by the action. Now joining us to talk about the Iraqi inquiry in England and perhaps why so little of this is making it into the American media is Eric Margolis. Eric is author of the book American Raj: Resolving the Conflict between the West and the Muslim World. And he’s written extensively on security issues and international affairs. Thanks for joining us, Eric.

JAY: Eric, tell us more about the testimony that took place during the inquiry.

MARGOLIS: The testimony is shocking and explosive, but nobody in the States wants to be shocked or hear explosions. The head of MI5, who knows more than anybody else—except for MI6, foreign intelligence—what was going on, has dismissed all of the claims made by the Bush administration and by British Prime Minister Blair, all the claims to justify invading Iraq. They were lies—that’s what she really said. And amazingly, the American media has paid very little attention to her astounding testimony. Other witnesses at the Chilcot investigation that’s reviewing the reasons for Britain going into the war against Iraq have also painted a very negative picture of the government, of its decisions. And what we see is a fabric of illegality, of violation of international law, and just downright lying our way into the war.

JAY: This has been at the very core of the Republican defense of the Iraq War, but not only the Republican; there were a lot of Democrats that voted in various ways to support the war. And the mantra of all of them has been, well, we weren’t the only ones that were fooled; all the other intelligence agencies thought the same thing we did. So her testimony should just be—as you say, exploded the whole mythology of the Americans for why they’re there. Yet even the Democrats don’t seem to be running with this, which should be a way to bury their opposition.

MARGOLIS: Well, so many of these Democrats voted for the war based on lies and patriotic jingoism, so they want to forget about it. But, you know, this claim by Republicans, "Well, all the other intelligence agencies said that Saddam is a threat," is also another lie, because what the US intelligence does, it has routine intelligence-sharing procedures with other Western—all NATO intelligence agencies. And these fake stories about Iraq’s deadly weapons were planted in the US intelligence system, probably through some Middle Eastern sources who wanted to see the war happening. The Americans then transferred this false information over to allied intelligence agencies. And then the president and his people had the chutzpah to say, well, look, they all believed it too. Well, what they were believing were phony American stories that had been passed to them. This was in no way evidence.

JAY: So in your rounds in Washington this week, is there any talk about the things that have come out of this British inquiry? Or are they just being ignored?

MARGOLIS: None. None. The only thing people want to talk about is Afghanistan. "Oh, that’s yesterday’s war. We’ll forget about it." But it’s shocking. And, you know, there is a case to be made for charges being brought against the politicians who led us into a war for reasons that can be not much better than called aggression. It’s shocking.

JAY: Well, you’d think if Obama wanted to change the dynamic of American politics, I mean, he should have—I mean, in my own opinion, and I think a lot of people, he should have done this a long time ago. But with this now testimony of MI5, he’s got more than the smoking gun. But you’re saying not a word of it.

MARGOLIS: He’s got a smoking machine gun. I think that Obama should use it to go after the Republicans, to discredit them. And particularly, the hardcore Republican war party that’s beating the war drums for war against Iran, just in the exact same way that war was drummed up against Iraq and to expand the Afghan war, is the perfect weapon for Obama. But Obama won’t use it, and he’s shying away. And I know midterm elections are coming up. But Obama just is either too gentle, or else he is too much under the influence of the military-industrial-financial complex here in Washington.

JAY: Thanks for joining us, Eric.

Eric Margolis is an internationally syndicated columnist and renowned book author. He’s a veteran Korea-watcher who specializes in north Asian military/strategic affairs. He’s been all over the DMZ and produced his documentary there last year featuring a segment from Panmunjom on the DMZ. Two special areas of focus:  1. What would a war actually look like if…