An election validated by blood and repression

Honduran coup government continues repressive tactics on election day (Report from San Pedro Sula) as the resistance vows to continue to fight for a new constitution and people's rights.

Honduran coup government continues repressive tactics on election day (Report from San Pedro Sula) as the resistance vows to continue to fight for a new constitution and people's rights. 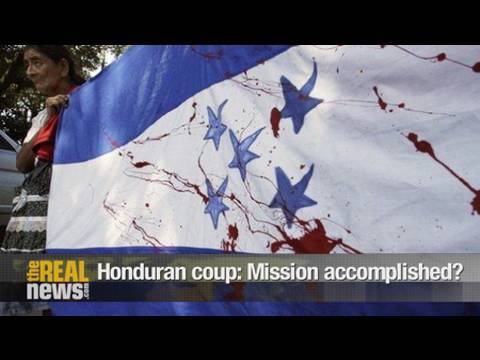 JESSE FREESTON, PRODUCER, TRNN: On Sunday, November 29, with the elected president of Honduras, Manuel Zelaya, still holed up in the Brazilian embassy, the regime that overthrew him five months earlier went ahead with scheduled elections to select their new president. The resistance to the coup boycotted the election en masse, and as expected, Pepe Lobo of the National Party won handedly with 56 percent of the vote.

FREESTON: But for those attacked on election day in the streets of San Pedro Sula, the country’s second-largest city, these words ring hollow. The new, self-titled humanist president has been a key supporter of the regime through five months of massive human rights violations.

UNIDENTIFIED (SUBTITLED TRANSLATION): They’ve imposed a coup regime on us. They’ve assassinated at least 34 of our companions since the coup that removed the legitimate president of Honduras, Manuel Zelaya Rosales. Nationwide, they’ve detained more than 5,000 of our companions. They’ve tortured, beaten, and massacred. This coup regime can’t say that it’s hosting clean and transparent elections, because the electoral process is being run by the same assassins of our people.

FREESTON: As the elections approached, the regime threatened anyone advocating against voting with four to six years in prison, and on the day of the election, they used the opportunity to detain the dissident Catholic priest Father Fausto Milla. He was detained for possessing anti-election propaganda.

FREESTON: This man claims to have narrowly avoided becoming another assassination victim of the regime when he was wounded in a drive-by shooting on election day. For security reasons, he asked not to be identified.

INTERVIEWER: Do you believe this is related to the resistance?

SHOOTING VICTIM (SUBTITLED TRANSLATION): Yes, my family is in the resistance, my parents are in resistance, and the house I was at at the time is also part of the resistance. It makes me very worried for the safety of my family and friends. The truth is that I blame the intellectual authors of the coup.

FREESTON: With the regime calling in all its military reserves for election day and promising to put down any threat to the elections, the leaders of the resistance called for everyone to stay in their house on Sunday. Most did, but in the city of San Pedro Sula, a group of roughly 100 began to march against the elections in full expectation that they would be attacked. They distributed 30 crosses with the names of assassinated resistance members on them, and as they proceeded on their march through various poverty-stricken streets, their numbers swelled massively. They carefully avoided the militarized voting centers in order to avoid conflict before arriving at the city’s central park. Roughly 100 of Honduras’s militarized police force, called the COBRAS, followed them there.

FREESTON: For a moment, it appeared that the police would disengage and allow them to express their opposition to the elections.

UNIDENTIFIED: This is the peaceful resistance of a people that is only asking for peace, justice, and freedom. We don’t want any more repression and violations of our human rights.

FREESTON: But they then abruptly put on their gas masks and went into formation.

UNIDENTIFIED: I want to tell them that their last names are exactly the same as mine. They’re not businessmen. They’re the same as us, Honduran people. What do you have to gain, police, by repressing us, defending Larach, Kafati, and Flores Facussé? What sense does that make, defending the country’s aristocracy, defending those that already have money?

FREESTON: A group of protesters sat down in front of the police line and began to sing the national anthem. Just minutes later, the assault began. After more than an hour of discretionary attacks on peaceful protesters, the police arrested 48 people and left the downtown center littered with empty tear gas canisters.

UNIDENTIFIED: These don’t intimidate us. We will never leave the streets. We will continue in resistance because we want a constitutional assembly. In Honduras we want peace and we want our president, José Manuel Zelaya. We don’t care if we die. If they want to kill us, then we will die with great dignity and honor.

FREESTON: Two election observers from the National Democratic Institute, which is funded by the US State Department, were spotted in the area after the attacks.

ELECTION OBSERVER, NATIONAL DEMOCRATIC INSTITUTE (US) (SUBTITLED TRANSLATION): We are trying to get the real information.

FREESTON: But they didn’t appear too concerned about the situation.

INTERVIEWER: What testimony did you guys receive?

INTERVIEWER: What testimony did you receive?

FREESTON: Many Hondurans who did go on to vote that day voiced their support for the police.

INTERVIEWER: But they were protesting peacefully.

FREESTON: The only glass-breaking that we observed that day was done by the police themselves.

UNIDENTIFIED: I’m sitting in my car, and they pulled me out of it. That’s what they’re trained for is to repress the people.

FREESTON: In the panic of the police attack, the marchers dropped the crosses named after their murdered companions. Then the same security apparatus allegedly responsible for those very murders quickly rounded up the crosses and took them away.

UNIDENTIFIED: I want to tell the police not to do this to your brothers and sisters, because they are Hondurans. When they aim at us, they are aiming at themselves. They must think about that.

FREESTON: None of Honduras’s mainstream newspapers, all owned by coup supporters, reported on the events of San Pedro Sula.

FREESTON: Meza alleges that these sources have yet to report on any one of the more than 5,000 humans rights violations since the coup. And once the polls close on Sunday, the coup information apparatus went into celebration mode.

UNIDENTIFIED: These has been the most cherished actions in the history of Honduran democracy, and we have legitimized our right to self-determination. Hopefully, this will be respected more and more every day.

FREESTON: The new face of the coup, Pepe Lobo, continued the illusion during his acceptance speech.

LOBO: These elections were the cleanest in the history of our country. Thanks to both the armed forces and the national police for providing us with security, calm, and trust. Your work fills us with pride. In my administration, we will make sure that both these institutions maintain their independence and their professionalism. Thank you to all the countries that have said they will accept our process—US, Germany, Colombia, Costa Rica, Mexico, Panama, Japan, Italy, Switzerland, Indonesia, the United Arab Emirates, and France, and others who have told me that for the moment we can’t say it, but you can be be sure that we will recognize you, as we can’t deny these open, transparent, and resounding elections.

UNIDENTIFIED: You can’t say the Honduran people are satisfied with this fake democracy, a democracy with no support, a democracy that has no base. The support for this democracy comes from above and not from below. Therefore it’s unsustainable and sooner or later it will fail. If the United States validates this process, as they are effectively doing (which is what the oligarchy needs, because they sell US imports here, and the tiny bit they export also goes to the US), if they approve this coup, the only thing they are doing is scheduling a civil war here in Honduras. If they continue repressing the social movements instead of complying with the movements’ demands, there will be a civil war, a bloodbath, just like there has been another parts of the world, because poverty is reaching exorbitant levels, levels never before seen. In Honduras today, 90 percent of the population lives below the poverty line and 65 percent of them live under the misery line, meaning less than one dollar per day. This is an insult for a country with so many resources

FREESTON: For five months, members of the Honduran resistance movement and analysts worldwide warned that the coup regime, with the help of the US government, was stalling in order to use these elections to legitimize the coup. On Wednesday, December 2, the coup against President Manuel Zelaya was completed when the National Congress voted against his restitution as president. But coups don’t just happen against presidents. This coup was against both the gains in human rights that Honduras had made since the 1980s and against a popular project known as the constituyente to create a more just and participatory society.

UNIDENTIFIED: Room must be made for the people and their organizations. We have to make a new social pact, new constitution that guarantees the human rights of all human beings in Honduras, not just the rights of one tiny group while marginalizing the majority. This is what the Honduran people want. This isn’t a fight between Zelaya and Micheletti; it’s between rich and poor.

FREESTON: November 29 might have been the day that Hondurans decided for themselves, through a constitutional referendum, whether or not they needed a new social pact. But a coup changed that destiny, and instead they were brutally attacked by a 21st-century dictatorship that, through an election, has merely changed its mass. While the new face might be enough for the international community to accept what has happened here, Honduras’ resistance movement will not.

UNIDENTIFIED: We can’t accept this electoral farce and we will fight to the death so that true democracy be respected in our country.