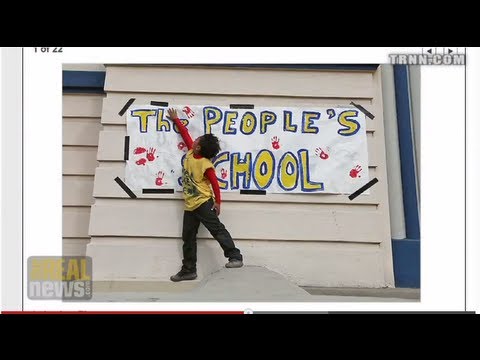 JAISAL NOOR: PUBLIC SCHOOL PARENTS AND STUDENTS FROM 18 CITIES ACROSS THE COUNTRY GATHERED IN WASHINGTON, DC THIS WEEK TO DEMAND A NATIONWIDE MORATORIUM ON SCHOOL CLOSINGS.

FEDERAL PROGRAMS LIKE RACE TO THE TOP OFFERED FINANCIAL INCENTIVES TO CITIES AND STATES FOR RADICALLY CHANGING THEIR SCHOOLS, INCLUDING FIRING STAFF AND SHUTTING SCHOOLS DOWN. WHILE THE OBAMA ADMINISTRATION TOUTED THE COMPETITIVE MULTI-BILLION DOLLAR PROGRAM AS A WAY TO IMPROVE EDUCATION AND BETTER PREPARE STUDENTS FOR COLLEGE AND THE WORKFORCE, MANY PARENTS, STUDENTS AND TEACHERS SAY THE CHANGES ARE DISPROPORTIONATELY AFFECTING LOW-INCOME COMMUNITIES OF COLOR.

(CLIP HELEN MOORE) “I came here to demand, I am demanding an education for our children. We pay the money, we have a right to have our kids educated”

THATâ€™S HELEN MOORE, A DETROIT EDUCATION ACTIVIST. SHE WAS ONE OF HUNDREDS WHO ATTENDED A HEARING TUESDAY IN WASHINGTON DC CALLING FOR A NATIONAL MORATORIUM ON SCHOOL CLOSINGS. BROWN WAS PART OF A GROUP THAT FILED A TITLE VI CIVIL RIGHTS COMPLAINT LAST SUMMER CHALLENGING THE POLICIES. SHE SAYS SCHOOL CLOSINGS IN DETROIT, A CITY ALREADY MARKED BY HIGH RATES OF UNEMPLOYMENT, VACANT HOUSES AND FORECLOSURES, ARE DESTABILIZING THE COMMUNITY.

(CLIP HELEN MOORE) “The neighborhood start going down as the families start moving out. They don;t want to be told what school to go to because there is no other school.

WHEN A SCHOOL IS CLOSED, THE STUDENT POPULATION OFTEN HAS TO TRAVEL TO A DIFFERENT SCHOOL BUILDING OR RE-APPLY TO GO BACK TO THEIR SCHOOL. ADDITIONALLY, THE STAFF IS OFTEN REPLACED AND RESOURCES ARE REGULARLY CUT, SOMETIMES IN FAVOR OF A CHARTER SCHOOL THAT IS OPENED IN THE SAME BUILDING.

SETH GALANTER IS WITH THE DEPARTMENT OF EDUCATIONâ€™S OFFICE OF CIVIL RIGHTS. HE SAID THEY ARE INVESTIGATING PEOPLEâ€™S CONCERNS AND THE 6 TITLE VI COMPLAINTS THAT WERE FILED:

(CLIP SETH GALANTER)” When we look at these things, i need to emphasize, we cannot deal with every harmful decision that happens. sometimes people are negatively affected, but that doesn’t mean civil rights violation. THe question we are asking is if there’s an intent to discriminate or decision to make an illegal closing. Not only investigate weather to close schools, which schools to close, and how these decision impacted and affect on students. ”

AFTER THE HEARING, HUNDREDS OF PARENTS AND STUDENTS MARCHED TO THE MARTIN LUTHER KING MEMORIAL FOR A RALLY, CONTINUING THEIR CALL FOR JUSTICE. JOEL VELASQUEZ , A PARENT FROM OAKLAND, CALIFORNIA SAYS HE FOUGHT PLANS TO SHUT HIS SONâ€™S SCHOOL BY LEADING A 3-WEEK LONG SIT-IN AT LAKEVIEW ELEMENTARY.

(CLIP JOEL VELASQUEZ) “After a year of trying to meet with officials, superintendent, we were left with no options, we took our school back. ”

A DELEGATION FROM NEW ORLEANS, THE CITY WITH THE HIGHEST PROPORTION OF CHARTER SCHOOLS IN THE COUNTRY, ALSO TRAVELED TO DC. STUDENT TERREL MAJOR SAYS HIS PUBLIC SCHOOL GETS LESS RESOURCES THAN THE CHARTER SCHOOL THAT SHARES THE SAME BUILDING.

MAJOR CALLS THAT DISCRIMINATION. DESPITE THE CHALLENGES, SOME ARE ENCOURAGED BY THE GROWING GRASSROOTS MOVEMENT AGAINST SCHOOL CLOSINGS, INCLUDING NEW ORLEANS PARENT AND ACTIVIST KARRAN HARPER ROYAL.

IN ADDITION TO A NATIONWIDE MORATORIUM ON SCHOOL CLOSINGS, ACTIVISTS ARE CALLING FOR SUSTAINABLE SCHOOL TRANSFORMATION, INCREASED RESOURCES AND A COMMUNITY-BASED INPUT PROCESS . ORGANIZERS HAVE VOWED TO RETURN TO WASHINGTON IF THE DEPARTMENT OF EDUCATION DOES NOT TAKE ACTION. REPORTING FOR THE REAL NEWS AND FSRN, THIS IS JAISAL NOOR IN WASHINGTON.