The Tucson Shooting, Civility And The New Class War Zone

Paul Jay: Instead of using 'civility' to cover up reality, how about a people's civility intended to reveal it

Paul Jay: Instead of using 'civility' to cover up reality, how about a people's civility intended to reveal it 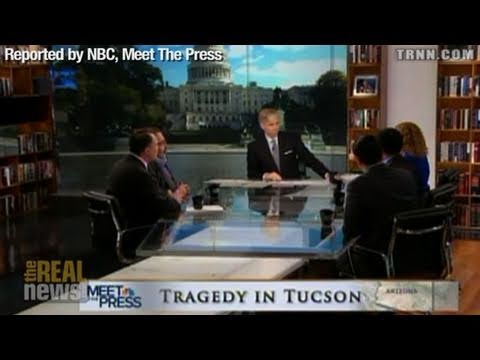 The Tucson Shootings, Civility and the New Class War Zone

Every so often, a tragic event shreds a gapping hole in the fabric of the official American narrative. Then the political elite and their media do whatâ€™s necessary to smooth things over, to find some calming equilibrium, lest we think about things that should not be questioned.

This time itâ€™s the shootings in Tucson, Arizona where six people died including Christina Taylor Green, a nine-year-old child who was born, in some kind of awful irony that connects the two events, on September the eleventh, 2001. She appeared in the book Faces of Hope: Babies Born on 9/11 and it says something about whatâ€™s happened to America over the last decade that her life ends in such a heartbreaking and meaningless way.

Murdered along side Christina was Chief Judge for the U.S. District Court for Arizona, John Roll and five others. United States Congresswoman Gabrielle Giffords, the intended target, was gravely wounded.

As we once again peer into the American heart of darkness, we see two nightmarish features of this country. First, itâ€™s another alarming instance of a young man playing out his paranoid delusions with an easily available automatic weapon. The extent of the violent psychotic behavior spawned by our culture must be faced.

Also exposed, in all its hideousness, is the latest rise of a national political culture based on such paranoia, with one section of the movement wanting to refight the New Deal and the other, the Civil War. One wants a return to the unrestricted capitalism of the 19th century, while the other wants the unrestricted racism of slave society.

What are we told in the elite media is the problem? The lack of civility. Once again, a formulation that will provide that much needed calm, a solution that if we all try really hard, we can achieve. Letâ€™s just all get along, and we will find that cherished equilibrium.

Certainly lets not talk about the fossils of the fossil fuel industry that pave the right populist way with tens of millions of dollars (read about the Koch brothers to start, but they are not alone).

These billionaires and their neo-con brothers finance and help organize populist politicians and movements that attract people who are legitimately alienated and legitimately angry with a big government that mostly serves big pools of capital. Capital for example, like that of the Koch brothers. Of course people taken in by all this wind up supporting one set of billionaires over the other, even against their own interests, but itâ€™s designed to feel like a fight for personal liberty and freedom.

This right-elite sponsored â€˜populismâ€™ also deliberately attracts people who want simplistic answers and ways to vent their bile on easy targets. In one election the target may be gays, the other immigrants, Muslims and who knows, maybe some day theyâ€™ll make their way back to Jews, and always, that is always, a foundation of deep hatred and fear of African Americans.

Playing a support role in all of this, the Internet â€˜paranoia businessâ€™ feeds the tortured psyches of the world, preying on panic, like the creature on Star Trek that drew energy by creating terror. In this case, itâ€™s dollars these webmasters of fear want. Finding secret conspiracies is much more profitable than revealing systemic underpinnings of abuse, there to be seen right in front of our noses.

There are no direct ties that we know of connecting the alleged shooter Jared Lee Loughner, with any of these movements. But the Sheriff of Tuscan put it well enough:

[Sheriff Clarence W. Dupnik] â€œWhen the rhetoric about hatred, about mistrust of government, about paranoia of how government operates, and to try to inflame the public on a daily basis, 24 hours a day, 7 days a week, has impact on people especially who are unbalanced personalities to begin withâ€¦â€

So, are our politicians and mass media pundits discussing why the conditions of American life breed such mental illness and such vile politics? What do they say is the problem? Whatâ€™s the solution?

Well, so far the answer is, as I said before, â€œlack of civilityâ€. Our rhetoric is inflammatory.

Hereâ€™s some of what was said on the Sunday morning news shows just after the shooting:

Rep. Raul Labrador, on Meet the Press: â€œI just hope that we can have some civility and move forwardâ€

Rep. Emanuel Cleaver, on Meet the Press: â€œI think members of Congress either need to turn down the volume, begin to try to exercise some high level of civility, or this darkness will never ever be overcome with lightâ€

Rep. Debbie Wasserman Schultz, on Meet the Press:â€â€¦ I agree, it’s our responsibility to make sure that we set the right example and set the tone of civilityâ€¦"

Donna Brazile, on ABC: â€œâ€¦I believe that we can return to civility. We can have debates, honest and strong disagreements on many of the major issues facing our country, but we can do it with civilityâ€

Rep. Steny Hoyer, on Face the Nation: â€¦in politics and in the media, in the public square, fashion our rhetoric so that it does not incite but informs and yes can differ but can differ in a way that is civil and consistent with our democracyâ€™s efforts.

Hereâ€™s how scholar and cultural critic Benjamin DeMott answers all of this:

What is the real American malaise? Why is this country in trouble? Lately the leader classes have been floating a fresh answer to these queries, talking up a new â€œroot causeâ€ of national woes. Not race, not class, . . . Our not-so-secret malaise is,

He said this in an article titled Seduced by Civility: Political Manners and The Crisis of Democratic Values, published by The Nation magazine in 1996. Now 15 years later, we get the same evasive answers at a time of even more serious national crisis.

While the far-right and neo-conservative elite mobilizes sections of the population for more war and a further weakening of constitutional and economic rights, the neo-liberal elite calls for bi-partisanship and civility.

President Obama said we shouldnâ€™t prosecute the former regime, not to open up old wounds. Instead it opened the door to the resurrection of the Rove-Cheney gang, who lurk behind this growing far-right populism, pushing and seducing it towards their agenda. It wonâ€™t be long till the true Libertarians in Congress are either bent or marginalized and we are left with the bunch that ran the country into the ground under Bush.

The neo-liberal Obama Administrationâ€™s demand for civility and compromise is a clarion call to the whole elite: â€œdonâ€™t let our differences get in the way of saving the economic systemâ€.

But as his administration works to save the very structures that created the financial crisis to begin with, that enrich the top 2% as even larger segments of the population fall into poverty, his far right opponents are preparing his demise, building a movement that will usher in a regime permeated with the kind of bigotry and hatred of government and collective solutions described by the Sheriff of Tucson.

Listen to Dick Armey, a former Republican US Representative from Texasâ€™ 26th Congressional District, and House Majority leader 1995-2003. Now Chair of Freedom Works, one of the driving forces behind the Tea Party and the far right. He pays lip-service to the ideas of civility, but the message to his troops is clear:

The real question is what are the rest of us going to do. Weâ€™d better start by understanding that the lack of civil discourse and extremes of competing ideology is not the underlying problem, but a symptom of objective difference of interest. Weâ€™re not one nation; there really are at the least two Americas. We are ruled by an elite that can compromise with each other to â€œsave the economyâ€ or to wage a war, but shows less and less willingness to â€˜compromiseâ€™ with working people and the poor. They want us to pay for the crisis, and they want us to be very polite about doing it.

Benjamin DeMott put it well: â€œâ€˜civilityâ€™ is in fact a theater of operations – the classless societyâ€™s new class war zone.â€

Instead of using â€˜civilityâ€™ to cover up the realities of life, how about we call for a peopleâ€™s civility intended to better reveal it.

We can start by telling the truth about the society we live in. Letâ€™s examine with honest and uncompromising inquiry, the actual conditions of life in America, without fearing the words race and class. Let those who want collective solutions try to find some common ground with those who distrust big government – which almost everyone agrees serves the top 2% more than anybody else. Letâ€™s agree that we value individual rights and freedom and understand that can only be meaningful in a more equitable society.

How about we answer this question: how can our schools and public health care system better intervene with students when there are obvious signs of psychotic disorders? What can we do to address the cultural, political, healthcare and law enforcement issues that have lead to so many mass shootings by disturbed young men? What policy would be in the public interest?

Letâ€™s base the inquiry on a study of facts, evidence, and researched opinion, because like so many other issues facing us, lives depend on it.

If youâ€™d like to join us in this inquiry, and yes, you want to keep it civil, please write us at [email protected] We will open up a section of the web site for people to submit their thoughts and proposals. We will interview experts and debate solutions. And of course, you can comment on this commentary in the space provided below.

Thank you for joining us on The Real News Network.