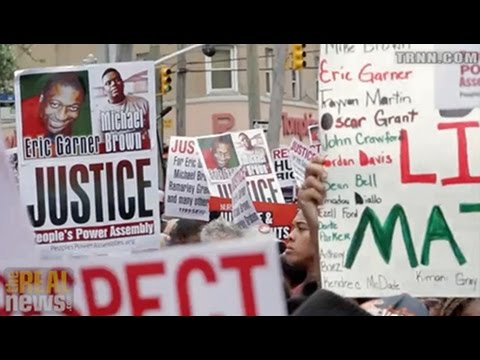 EDDIE CONWAY, TRNN: I’m going to be in Cleveland for the Black Lives Movement, right. And the Black Lives Matter thing that’s springing up around the country, what is that about? That’s about self-worth. Activists from across the country traveled to connect and share their experiences organizing for change.

SPEAKER: Our people came across oceans to be here.

MILO JACKSON: My name is Milo Jackson, and I’m traveling here from Baltimore, Maryland. I mean, black people are being targeted. You know, we are being targeted in this country. And I’m a black person. And watching your people being targeted and killed and their killers walking away from it or just feeling that they have the right to just murder us and get away with it, like, that’s not okay. So right now to me and to a lot of people, especially–I mean, obviously everyone here, this is the issue right now.

SPEAKER: The most obvious concern of violence against our humanity through police brutality, there’s evidence of that through the shooting and killing of young 12-year-old Tamir Rice. The shooting of Malissa Williams and Timothy Russell, 137 shots.

SPEAKER: I think it’s really, really beautiful to see so many beautiful black people walking around and sharing space and networking, and bouncing ideas off of each other.

ALBERT [TERRY]: My name is Albert Terry. I’m from Mobile, Alabama. I’m with Socialist Alternative from our branch based here, the Mobile based branch of Socialist Alternative. I came here by bus, quite a long bus journey, 30 hours altogether. But it’s well worth the journey. We don’t have any high profile police murders hit the news in Mobile, Alabama but the suppression’s there all the same, where you see stories about people getting tasered 13 times as they’re being transferred between jails. You see, you see the police chief do interviews talking about how 70 percent of crime happens in 10 percent of the neighborhoods. He’s justifying going through housing projects kicking doors in.

SPEAKER: My name is [Mishaya].

SPEAKER: My name is Shae. And we’re from the Project South organization. It’s called Ten Mills For Real.

SPEAKER: And basically it’s about the school SROs, which is Student Resource Officers, giving $10 million and more to the police instead of more important stuff like technology, driver’s ed, healthcare programs for at-risk teens and job training for classes.

CONWAY: Others like Cherno Biko attended to advance transgender rights within the movement.

CHERNO BIKO: We did a lot of organizing around four trans women of color who were murdered here, and their names are Cece Dove, and Betty Skinner, and Brittany-Nicole Kidd-Stergis, and Tiffany Edwards. And so I must always bear witness for them.

SPEAKER: We are being shot down in the street, put in jail cells. I mean, we’re being killed, any way you look at it. So if you’re being killed whether you fight back or not, what do you have to lose?

SPEAKER: And when the state sees power, or the potential of power, it’s either going to straight take you, incarcerate you, kill you, Sandra Bland. I think that was a political assassination. We finally see what we’ve been teaching these young people, know your rights and assert them. And look what happens when you know your rights and you assert them. You’re then disappeared for three days, and then you’re found. Supposedly you committed suicide. I think that means they understand the potential of this.

SPEAKER: The framing of a party is really needed. We’ve seen it in a bad way, we saw the Tea Party takeover. But the identity, right. We know right now that we’re living in a two-party system that is failing all of us, right. And to have an identity ingrained in a party, I think people want to be a part of, people understand what parties are.

CONWAY: The resources are drying up here. That’s why you have all of this mass incarceration. So yeah, it’s not just about Black Lives Matter. It’s all lives matter, saving the planet. And it’s building the movement that’s broad enough to cover the whole entire planet and address all the different needs. We can do it. We’re doing it. And we’ve been doing it since they snatched us from slavery. And we’ll keep doing it until it’s done.

SPEAKER: We have nothing to lose but our chains.

AUDIENCE: We have nothing to lose but our chains.

CONWAY: From the Real News Network, this is Eddie Conway. 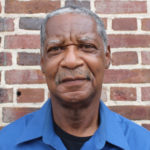