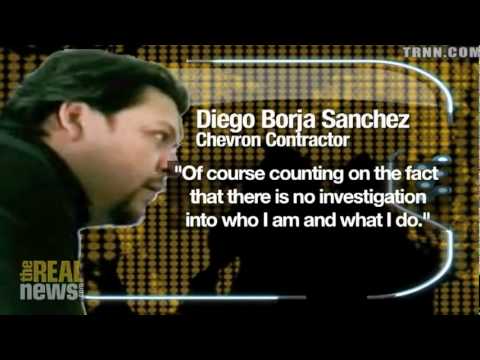 OSCAR LEON: Welcome to The Real News. I am Oscar Leon. In part one of this special report, we reviewed the struggle of 30,000 people from the Ecuadorian rainforest and their battle against Chevron, trying to get compensation for a series of oil spills that has allegedly caused massive ground and water contamination. Back in 2009, the documentary Crude was released to critical acclaim. It shed light on the legal struggle of the people of the Ecuadorian Amazon. The defendant, Chevron, appeared on the edge of being forced to pay $27 billion or more. In a tiny court in Ecuador, business publications [all] over the world grappled with the precedent that the trial will have set for future environmental disaster cases around the world. Things were not looking good for the oil giant. Then, in September 2009, a video was released by Diego Borja and Wayne Hansen, two men claiming to be rainforest restoration contractors. The meeting shows a discussion regarding potential cleanup contracts should Chevron lose the lawsuit. Chevron claims the video shows Judge Juan Nunez and an Ecuadorian government official allegedly asking for bribes from the two contractors.

NUNEZ (SUBTITLED TRANSLATION): The ruling comes out and there’s someone to execute that ruling. It will be necessary to demand from Chevron, of course, if you lost the trial, pay up. And in that case, that ruling, sir, there has to be a person to execute the ruling.

LEON: The second part of the video released by Borja, we see a different meeting, this time without the judge or the first government official present. A new man we’re told is a government official agrees to take money from Borja and deliver it to the judge. After six years overseeing the case, the judge had been gravely compromised and was forced to step aside. Just two months later, the man who recorded the video, Diego Borja, found himself the subject of a revealing recording. In November 2009, Santiago Escobar, former friend of Borja, came forward with a number of audio recordings. In the recording, Borja is heard bragging to his friend Escobar that this was a careful planned scheme to undermine the judge, just weeks before the verdict of the then 17-year-old trial was to be declared. At the time, Diego Borja did not know he was being recorded, but his allegations about the trial and Chevron imply some very serious wrongdoing. Here are some crucial parts of the phone calls Escobar recorded.

DIEGO BORJA SANCHEZ, CHEVRON CONTRACTOR (SUBTITLED TRANSLATION): Chevron has always supposedly sent the samples to US, to an independent lab, right? But I know it’s not true.

SANTIAGO ESCOBAR (SUBTITLED TRANSLATION): "Where did they send it?"

BORJA: I can’t tell you that. But you dig it?

ESCOBAR: I don’t understand what that means. They didn’t analyze the samples? Or they manipulated the results in their favor?

ESCOBAR: Ah, so they send it to labs with ties to the company?

BORJA: I have the proof it was their lab.

ESCOBAR: How do you know all of this? It is not for any employee to know.

BORJA: I am not just any employee, damn it. As I said, I can’t tell you everything that I do, because I am not an employee, and I never was one. My bosses weren’t in Ecuador. Everything came from up here. That’s why I came here right away. Of course it was planned. It had to. How else could I have got the watch-camera and all that?

ESCOBAR: What if something happens to you? How can you make sure they give you (the money)? More than what you’ve got so far. [sic] I mean, how do you make sure you get the rest of it?

BORJA: Well, there is no guarantee. There is nothing in writing.

ESCOBAR: So you can tilt the balance to either side.

BORJA: Of course, to either side. Imagine how tilted is it right now. What they couldn’t achieve in what? A year? [sic] I got the judge thrown out in 3-4 days. "That’s how it is now." "Of course, counting on the fact that there is no investigation into who I am and what I do." "The moment I get to confirm the story. It’ll be even more on our side." [sic] "If things don’t work out the balance can change drastically." "Imagine: in USA as well as other countries there is an act against corruption. Right?" If the corruption act is proven, they can shut Chevron down.

LEON: Escobar then delivered to the Ecuadorian authorities a phone conversation that he taped with Borja, through which the public learned that the supposed government official from the second meeting was actually a car salesman, that Borja himself has strong ties with Chevron, and that Wayne Hansen was not a restoration contractor but a convicted drug trafficker. The Real News spoke with the whistleblower, Santiago Escobar.

ESCOBAR: Borja’s office is in the Borja-Paez building, property of his uncle, who is Chevron’s trade manager in Ecuador. That is what Borja told me. We were in a club in Quito, and Borja was bragging, telling all of us that he just made the best business in his lifetime, that he just filmed Judge Nunez, and that he was going to get a lot of cash.

LEON: After this evidence was released, Chevron paid for Borja to leave Ecuador and set him up with a home near their California headquarters. The Ecuadorian government filed a petition to subpoena Borja in San Francisco, and in December 2010, Judge Edward Chen ordered Borja to appear in court to describe what he knows about the case. Borja didn’t show, but his high-priced criminal defense lawyers did, including Cristina C. Arguedas, who represents high-profile clients such as Barry Bonds and Kobe Bryant. Chevron’s James Craig told The Real News that while Borja had worked with the company in the past, he was not under contract when he and Hansen filmed the meetings. Craig claims that the tapes are irrefutable proof of judicial misconduct.

JAMES CRAIG, MEDIA ADVISOR FOR LATIN AMERICA, CHEVRON CORP. (TEXT ON SCREEN): Mr. Borja is a former contractor for Chevron who did logistical work associated with the judicial inspection phase of the trial. His work relationship with the company had ended before he and Wayne Hansen decided to videotape meetings with people claiming to represent the government and ruling Alianza PAIS Party with Judge Juan Nunez. Prior to making the videotapes public, and out of concern for their safety, Chevron helped Mr. Borja and his family leave Ecuador and resettled in the US.

LEON: In papers filed with a federal district court in San Francisco, Borja’s lawyers do not deny that he made the claims the oil giant cooked evidence. Instead, they argued that statements are not relevant to the international arbitration claim between Chevron and the government of Ecuador, which is the legal basis for the subpoena. In yet another legal battlefield in New York, Chevron submitted many key witnesses to discovery of the positions, including the producer of the movie Crude and the plaintiff’s main attorney, Steven Donzinger. From the start, Donzinger has been one of the main engines behind this lawsuit. And now he’s being accused by Chevron of falsifying expert reports and colluding with independent court appointees. Only days ago, Donzinger had to appear before a judge in New York. We spoke to Karen Hinton, a member of the plaintiffs’ lawyers’ staff, about this. She thinks this is another one of Chevron’s delay tactics.

KAREN HINTON, LAWYER AND SPOKESPERSON FOR PLAINTIFFS: Well, I think the most important thing to remember is that Chevron does not deny that Texaco dumped over 18 billion gallons of oil and toxic formation water into the Ecuadorian rainforest. And we believe that as a result of that, the environment has been destroyed for the people who were living there in the former concession area, we believe their health has been damaged, and we believe people have died as a result. So one would think, given all of that, that the individuals living in the rainforest could have justice by now. And you’re right: it’s been 17 years. And the only answer I have for your question is to say that Chevronâ€”Texaco and now Chevron have worked very hard (and they certainly have the legal and financial resources to do this) to delay justice to the people who are living there, for as long as possible.

LEON: I contacted Chevron to understand their perspective on the issue. Chevron’s Latin America media advisor, James Craig, responded in an email that Texaco already restored the pits it is responsible for back in 1995 at a cost of $40 million. He adds that:

CRAIG: The two sides negotiated a settlement and release agreement, signed in 1995, and Texaco Petroleum then proceeded to remediate its proportionate share of environmental liabilities. At a cost of $40 million, the company remediated 162 pits and six spill areas, installed seven injection systems for Petroecuador, and provided more than $5 million to communities for social projects. After site-by-site verification of the remediated sites by state officials and experts of the Central University in Quito the Ecuadorian government and Petroecuador granted Texaco Petroleum a full and complete release of future liabilities. Petroecuador, meanwhile, assumed responsibility for the balance of the remediation that was to have been performed and has failed to fulfill its obligations.

LEON: For the people of the Ecuadorian rainforest, this 18-year process appears to move in slow motion while they continue to drink the water.