30,000 natives fight for compensation against Texaco (now Chevron), accused of 3 decades of toxic dumping in Amazon

30,000 natives fight for compensation against Texaco (now Chevron), accused of 3 decades of toxic dumping in Amazon 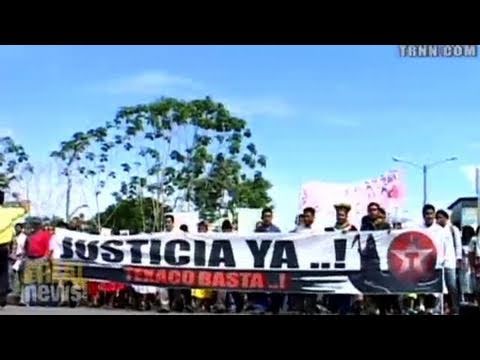 OSCAR LEON: Welcome to The Real News. I am Oscar Leon, and this is a special report on the struggle of 30,000 people from the Ecuadorian rainforest to get compensation for a series of oil spills that have caused massive ground and water contamination. The battle pits five indigenous tribes and more than 100 farmer organizations against Chevron, the third-largest company in United States. Chevron took on the battle when it purchased Texaco in 2001, and it’s currently fighting a multibillion-dollar lawsuit in an Ecuadorian court. Escalating from $27 billion to $40 billion or maybe $90 billion, it stands as the largest environmental lawsuit in history and has already been held up in court for 18 years. In the early ’70s, Texaco began drilling for oil in Ecuador’s Amazon jungle and continued for more than 30 years. Those operations are believed to have resulted in what many experts have labeled as an ecological catastrophe that spilled many times more oil than the Exxon Valdez. Texaco is accused by the plaintiffs of dumping 18 billion gallons of toxic water and cancer-causing substances into the rainforest, and not by accident. The waste water was dumped in rivers and fields, and in some cases, deposited up in pools. According to the plaintiffs, 900 pools of waste have been found in the Ecuadorian rainforest where Texaco operated. The waste pools are nothing but holes in the ground, without any walls or cover to prevent contact with underground water. Moreover, each pool has a filtration system known as goose neck. It is designed to prevent the pools from overflowing with rain water by draining the contaminated water into nearby aquifers and streams.

UNIDENTIFIED (SUBTITLED TRANSLATION): The goose neck is pointing down to hold the oil, but the water–but the water’s becoming–let’s put it this way: the water is mixing with oil. It’s draining through here, directly into the river.

LEON: The plaintiffs claim that this bad management of toxic water was deliberate. They point to internal documents leaked from Texaco Florida’s headquarters in 1972. The documents show the company instructing its employees to hide minor leaks and only report leaks large enough to draw the attention of the press and local authorities. It also instructs the staff to erase all evidence and documents related to any oil spill. In the poorest region of the country, people have two available water sources: underground wells and the Amazon Jungle rivers. Over the last 30 years, both sources have seen formerly pure water become loaded with toxics and cancer-causing agents. I contacted Chevron to understand their perspective on the issue. Chevron’s Latin America media advisor, James Craig, responded, in an email, that Texaco already restored the pits it is responsible for back in 1995 at a cost of $40 million. He adds that:

JAMES CRAIG, MEDIA ADVISOR FOR LATIN AMERICA, CHEVRON CORP. (TEXT ON SCREEN): The plaintiffs’ lawyers’ claim that Chevron is responsible for more than 900 pits in Ecuador’s Oriente (Rainforest) cannot be substantiated by fact. Rather, it is an invention of their own that they have tried to pass off as the work of an "independent court appointee." The two sides negotiated a settlement and release agreement, signed in 1995, and Texaco Petroleum then proceeded to remediate its proportionate share of environmental liabilities. At a cost of $40 million, the company remediated 162 pits and six spill areas, installed seven injection systems for Petroecuador and provided more than $5 million to communities for social projects. After site-by-site verification of the remediated sites by state officials and experts of the Central University in Quito the Ecuadorian government and Petroecuador granted Texaco Petroleum a full and complete release of future liabilities.

LEON: Pablo Fajardo, one of the lawyers working on behalf of the Amazon plaintiffs, says that those government officials were corrupted, and any agreement don’t represent the reality on the ground or the perspective of the local people, which still feels that Chevron is responsible for the damage.

PABLO FAJARDO, LOCAL LEADER AND LAWYER (SUBTITLED TRANSLATION): Our greatest challenge is the economic one. We are fighting against a very powerful corporation. They abuse their economic power. Our most serious challenge is the corrupting of officials by Texaco. There are tremendous and gigantic corruption schemes. They have always tried to manipulate governments, regime officials, and ministers to get their way.

LEON: In 1972, Texaco began drilling for oil in Ecuador, the same year Pablo Fajardo was born. Through scholarships he obtained a law degree with the sole purpose of leading the legal fight to get compensation for the survivors in the rainforest. This relentless journey of years of study and struggle brought Fajardo recognition on CNN’s 2007 Heroes Award ceremony, where he took the Hero of the Year award. For a moment, it seems to those watching from Ecuador that a victory for the Amazon farmers and tribes might not be out of reach after all.

FAJARDO: I have the honor to represent as a lawyer five indigenous tribes and more than 100 farmer communities that are united to achieve reparations for a horrible environmental disaster caused by oil exploitation.

LEON: This brought more attention, but three years later it hasn’t translated to success on the legal front. We spoke with Fajardo by webcam from Sucumbios, Ecuador.

FAJARDO: In a nutshell, I can tell you that there has been a clear intention by Chevron, formerly Texaco, to avoid any kind of trial or sentence, using all kinds of arguments, tricks, economic pressures, lobbying to persuade governments and judges, while wearing down the plaintiffs to avoid trial. What has prevented justice is all the tricks used by Chevron. It is important to understand the way Texaco operated. In 1964, Texaco got a drilling concession from the Ecuadorian government, where they gave them 1.4 million hectares to explore, drill, and extract oil from the Ecuadorian rainforest. The lands where Texaco started exploring back then were inhabited by native people like Siona, Secoya, Cofanes, Huaoranis, Tetete, Sansahuari–the latter two went extinct in the first years after Texaco got there. But what has been the main issue besides invading their lands, what Texaco did was to dump billions of gallons of toxic water straight into the rainforest rivers, constructed hundreds of pits to dump dirty mud, toxic waste into pits that had no cover or wall to prevent the waste from contaminating the environment. We are not blindly against the oil extraction. We are against the way things are done, the criminal and perverse way that companies extract the oil just to increase their profits. They caused disasters like Texaco in Ecuador or like the BP oil spill in the Gulf of Mexico. Some governments have been complicit, sometimes for money looked the other way. I have said it a number of times and I will say it again: any compensation that comes out of the trial, no matter how big it might be, it would never be just to the Amazon people. There are many levels of damage beyond repair, like the ecosystem that was devastated by Texaco’s operation. It does not matter how much money you spend, it can’t be restored. Look at the indigenous cultures, two tribes has already extinct. [sic] There are four more tribes that are seriously threatened by oil operations. These cultures have been divided, demobilized, and put on a path to extinction. No money in the world can fix that. It can be remediated to some degree. Their extinction can be delayed. At the rate we are consuming and the damage inflicted, it’s almost impossible for them to survive. And third, the life of people: according to public stats, as a consequence of the toxic waste left by Texaco in the Ecuadorian Jungle, in the last few years 2,000 more people have died of cancer in this area than the national average would have predicted. All those cancer deaths are a consequence of the spills and cannot be recovered either. So I repeat, no economic settlement, no matter how big, could ever bring true justice to the people of the Amazon.

LEON: Initially the case was heard in a New York court. Texaco argued that the New York court had no jurisdiction over an oil spill in Ecuador, and after nine years the lawsuit was thrown out by the judge. Fajardo and the main attorney for the plaintiffs, Steven Donziger, responded by filing a new lawsuit, this time in a local court in the small Ecuadorian town of Sucumbios near the oil spill zone. According to Ecuadorian law, Judge Juan Nunez appointed an independent expert to determine an appropriate dollar amount to cover environmental cleanup, restoration, and compensate the victims. The result was a $27 billion lawsuit, the largest ever of its kind. The plaintiffs have since raised their demands to a number to be determined between $40 billion and $90 billion. In their initial statement, Chevron lawyers argued again that the Sucumbios court had no jurisdiction. Years of legal battle ensued, battles that seem slow motion for those still doomed to use their region’s toxic water. In part two of this special report, we will go over some of the surprising turns the legal process has taken over the last 18 years while the jungle continues to die slowly. For The Real News, this is Oscar Leon.

February 25, 2019
Sign Up for Our Newsletter
Help Us Make Real News!