In Ecuador President Rafael Correa is reelected with 61% of the vote, he faces 4 critical years for Ecuador, the main challenge now is to keep the country on the path of growth while shifting the model from a raw material based economy to a new, more sustainable and inclusive one.

In Ecuador President Rafael Correa is reelected with 61% of the vote, he faces 4 critical years for Ecuador, the main challenge now is to keep the country on the path of growth while shifting the model from a raw material based economy to a new, more sustainable and inclusive one. 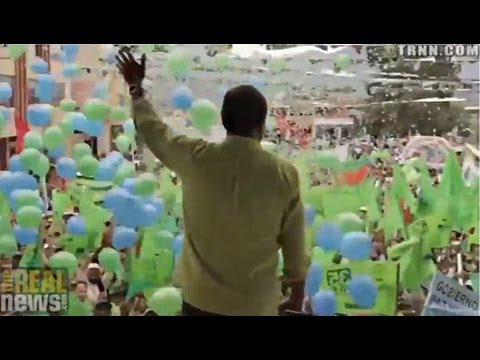 OSCAR LEÃ“N, JOURNALIST, TRNN: On Sunday, February 17, Rafael Correa was reelected for a new four-year term in office with 61 percent of the vote, according to a number of polls.

It is important to know that the reelected president has won seven elections in a row, including three presidential elections, one constituent assembly, one confirmation for the new constitution, and two midterm elections.

Despite the intense polarization among many sectors of Ecuadorian society, a 61 percent vote in this reelection bid gives Rafael Correa political leverage to further implement his vision, more so when the opposition was not able to work together and put on a fight. Guillermo Lasso, the second incumbent, got only 22 percent of the vote.

RAFAEL CORREA, ECUADORIAN PRESIDENT (SUBTITLED TRANSL.): Be certain that this Sunday we have achieved and ratified the most important thing. It is the fact that in this country the bankers are not the ones in power. The political parties and mass media don’t rule anymore in here. Here no de facto group rule in the private interestâ€”we are not ruled by the IMF and the international bureaucraciesâ€”is important that hegemonic countries are not the ones that rule (here in Ecuador). Despite many mistakes we can make, be certain, people, that here you are the ones that rule, Ecuadorian men and women.

LEÃ“N: If he finish this new term on 2017, he would be ten years in powerâ€”a new record in a country famous for its coups. In the previous decade, between 1997 and 2007, there was ten presidents who at some point were in power, including five in 25 hours on January 21, 2000, when Jamil Mahuad was taken down.

Simon Pachano, a politics and sociology teacher at the Latin American Faculty of Social Sciences campus in Quito thinks there are two main reasons for Correa’s popularity.

One, all the previous ten years of crisis and instability featured events that were very shocking for Ecuador’s people, like the banking crisis and the fall of the presidents. This left a scar on the population that as a solution searched for a strong leader. We saw that in a number of elections. Eventually that leader was found in Rafael Correa.

Two, once they found that strong leader, they gave him a blank check. It was like saying to him, you take care of business; we are going back to our private lives. And that is what we have seen in the last six years. People withdrew from the previous massive social mobilizations.

According to Mark Weisbrot from the Center for Economic and Policy Research (CEPR) in Washington, the Ecuadorian people has made a clear choice.

MARK WEISBROT, CODIRECTOR, CENTER FOR ECONOMIC AND POLICY RESEARCH: Well, I think the reason that he has the mostâ€”Ecuador has had the most ability under him that it’s had for, you know, at least 100 years is because he’s really brought social and economic progress. And people are satisfied with that. They haven’t had anything like this for a long time. You know. Unemployment hit a record low of 4.1 percent at the end of last year. Poverty’s down about 27 percent since he took office. And you haveâ€”education spending has doubled.

LEÃ“N: The main reason for such popular support seems to be an emphasis on the people, not on serving private interest. Instead of an approach based on privatization and austerity that serves the financial institutions and private corporations, Rafael Correa invested in infrastructure and education, controlled public spending, especially debt service, declaring some of Ecuador’s debt odious debt and reducing foreign public debt up to 80 percent.

Jorge LeÃ³n, sociologist, author, and teacher of Latin American studies in many universities believes that the price of the oil has helped Rafael Correa’s administration.

JORGE LEÃ“N TRUJILLO, AUTHOR, RESEARCHER, AND SCHOLAR (SUBTITLED TRANSL.): Correa has been able to perform very popular policiesâ€”fundamentally, redistribution of wealthâ€”thanks to the fact that Ecuador’s revenues have grown, since oil is very expensive now. Coincidentally, since Rafael Correa assumed power, the price for a barrel of oil went from $13, $30, $50, $60, $70, and lately up to $110, now is $95. In concrete terms, that means that the national budget went from $5 billion when he assumed power to $28 billion, where it stands now. The national income grew five to six times. So that allowed him to fulfil his promises.

LEÃ“N: The changes to the electoral system enacted in Ecuador’s new constitution does not allow for private money in public elections. This has changed the political landscape radically in the past decade.

It also mandates all citizens to vote on a national voting day and eliminate those political parties that did not get enough percentage of votes.

In the two previous presidential elections, Correa has won on a single direct election with more than half of the votes.

As far as foreign policy, Mark Weisbrot believes the U.S. Department of State is wrong to believe that the Latin American political process is the result of a handful of leaders when in fact it’s a social process that go beyond people like Rafael Correa or Hugo ChÃ¡vez.

WEISBROT: U.S. foreign policy in Latin America is guided by much more than corporations. I mean, there are plenty of cases. You can look in Venezuela, for example, where the biggest oil companies in the United Statesâ€”Chevron, and for a while ExxonMobilâ€”really didn’t want to bother ChÃ¡vez, and the State Department attempted to destabilize and get rid of that government. And I think they look at it, the United States looks at the left governments, all the left governments, including Brazil, asâ€”you know, they look at them in Cold War terms, like they always did during the Cold War. They don’t really want them there.

They are starting to portray Correa as maybe the next ChÃ¡vez, you know, because ChÃ¡vez is ill. And this is all based on their fantasy, I think, that some kind of strongman leads the Latin American left governments, when really, if you look at all the institutional changes that have taken place, from UNASUR to CELAC to ALBA, they have been collective projects, and especially in South America. All of these countries have worked together to the point where even the non-left governments like Santos have becomeâ€”and [[email protected]’[email protected]] have gone with them and against the United States on a whole number of issues.

LEÃ“N: Rafael Correa faces four critical years for Ecuador. The main challenge now is to keep the country on the path of growth while shifting the model from a raw material base one to a new more sustainable and inclusive one.

Reporting for The Real News, this is Oscar LeÃ³n.