Lead in the water. Arsenic in the soil. East Chicago residents sound off on representatives from EPA and HUD, about how their community resources were contaminated for decades by industry. For the extended version of this story, click here

Lead in the water. Arsenic in the soil. East Chicago residents sound off on representatives from EPA and HUD, about how their community resources were contaminated for decades by industry. For the extended version of this story, click here 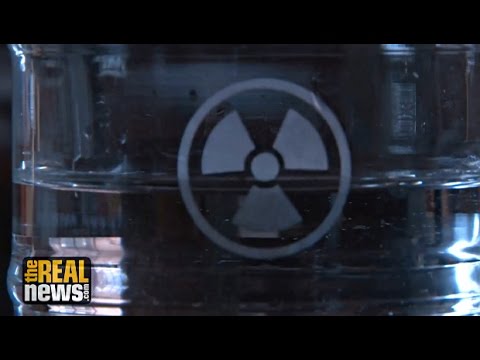 KIM BROWN: Imagine if the EPA said that 90% of your town’s waterlines contained lead. What if people had been living on top of soil contaminated with arsenic, and lead, for decades? That’s exactly what happened to the people of East Chicago, Indiana.

On April 5th, community leaders and residents gathered at the First Baptist Church for a town hall listening session, sponsored by the NAACP, and the Twinned Ministerial Alliance, with representatives from the Environmental Protection Agency, and the Department of Housing and Urban Development in attendance. The Real News was there, and here’s a look.

BARBARA BOLLING-WILLIAMS: I know that this is not the first event that you’ve come to dealing with this subject matter. Those of you who are most affected, have probably gone to many meetings, many, many meetings, in an effort to make sure that you are treated fairly and justly. And that is certainly our prayer, and our desire for you, and our reason for being here this evening.

MARITZA LOPEZ, RESIDENT: Because I grew up in the Superfund site and did not realize what was surrounding me, or what I grew up in. I give no fault to nobody, because none of us knew, but there were agencies that knew. And many of us residents found out, and I want to acknowledge the residents that are involved with the community advisory group recognized, of which I’m one of them, and it’s known as the East Chicago Calumet Coalition, here in the Superfund site.

We’ve been working diligently since October, weekly meeting the residents and all the issues here discussing.

But things that I suffer, as my heart stops, whenever it wants, I suffer seizures. I started losing my teeth by the time I was 18, with pieces of jawbone coming out. I suffered an aneurism when I was 10. I had severe arthritis by the time I was 12. I was already fully disabled by the age of 38.

TAMMY DAVIS, RESIDENT: And so, now that we’re having the conversation about what to do now, how are we going to resolve the impact of this issue that has been going on for decades, primarily for people that no longer live here? God bless you for still being a resident, God bless you for your life and the breath and the anointed that God has on you.

Yet we still have people that no longer live in Calumet, that are suffering from the effects of this, but I don’t hear their voices in this conversation, or how their issues are going to be addressed. So, that is something that I am very interested in learning, not just for myself, but for the families that no longer live here, but have been impacted negatively as a result of the lead issue.

AKEESHA DANIELS, RESIDENT: This is a question for the EPA. My name is Akeesha Daniels, and I’m a resident of the West Calumet Housing Complex. I was wondering, why wasn’t our furniture or anything cleaned, before we were let back into our units?

And what are the chances that we can take that… well, we know we can’t take the furniture with us, but what was the reason for it not being cleaned in the first place, when you cleaned the houses, or the units?

That was part of the cleaning process, so the furniture should have been cleaned, and if it wasn’t, that was the intention. And that’s certainly something I can talk to you afterwards. But yeah, we did… last year, when we did the cleaning, it was a deep cleaning, all the surfaces were cleaned, everything, all the… to the degree that we could clean personal property, we did the best job we could.

We steam cleaned where there were fabrics involved, floors, ceilings, pretty much — it was something that literally took several days for each unit to do. So, if there was, for some reason, an incomplete cleaning let us know. We’d be more than happy to come back and talk to you about it.

AKEESHA DANIELS: Being that my unit tested at a 32,000 inside with the lead, and 800 with arsenic, was it safe for me to even return to that unit…?

DOUGLAS BALLOTTI: Yeah. After it was cleaned, and we did sampling before people returned back into the properties, but, yes, we believe that the cleaning itself took care of any of the contamination that was inside of the unit itself.

AKEESHA DANIELS: But that’s even without the furniture, and the appliances… well, my furniture and bedding being not steam cleaned?

DOUGLAS BALLOTTI: Yeah. Yeah. It’s one of those things that you can only clean the materials so much, or there will always be some residual material left. And we’re really looking at what material would be released within the unit, that would cause a health effect, and we’ve established health standards for that, within the unit.

And so, the intention was to clean it so that when we went back and sampled, we wouldn’t have that problem. And you should’ve been able… the folks who did the cleaning or EPA, when they were out there last year, should’ve communicated with you on what the sampling results were. Basically, you know, is it below or above the reaction level, for cleaning in those units.

So, it’s a somewhat uneven distribution of contamination across the neighborhood, so you may see that there are certain areas of your property that might need remediation, and other parts that don’t.

However, we will provide you all the data that we’ve taken on your property, and sit down with you and go over with you, and basically tell you what it means, what its implications are, and we can talk to you about the underground storage tank, as well.

RESIDENT, MAN: Okay, yes, I understand that, but I don’t believe the results. Because, I live on the south end of Euclid, which is across the tracks is DuPont. But now five, ten doors down to the north, they did their front yards, everything, but I haven’t seen not one house in the 4900 block of Euclid, where they only did the front yard.

Every property I’ve seen them doing, they did everything. But I’m the only one that they say, “We can only do the front yard.”

We were recently… the other part of the question was, have we received anything from the mayor? And the answer is yes, we just received a request… the HUD secretary received a request from Mayor Copeland, to have EPA clean it to a certain standard, where HUD housing could be built back on the site. We are in receipt of that. We have not answered that question.

JAMES CUNNINGHAM: The question was, what we’re doing, we received the request, and now what I’m saying is that, yes, we received a request. We have not responded to it.

RESIDENT, WOMAN: Yes, how is it that you can put all those people out of their homes, and say that you can clean it to a certain extent, to rebuild for some more people to come and stay in there, instead of having the same people stay where they already were?

KIM BROWN: Look for more of our reporting on the contamination of East Chicago coming soon, right here, on The Real News Network.