Building a Strong Link Between Workers in the U.S. and Cuba 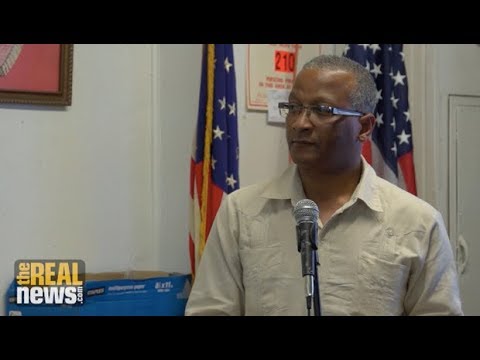 VICTOR MANUEL LEMAGNE SANCHEZ: My name is Victor Manuel Lemagne Sanchez. This is a very important to have strong link between the workers from the United States and the workers from Cuba. I would like to tell you that 97.2% of Cuban workers are affiliated in trade unions.

EDDIE CONWAY: Why did you organize this event, and have this brother from Cuba come here?

RICARRA JONES: We were very excited when we were contacted to find out that he was gonna be visiting 11 cities and that Baltimore was one of them, so we wanted to make sure that we were able to get a group of folks together to hear Mr. Sanchez speak about everything that’s going on in Cuba, and try to open the dialogue between what’s happening in Cuba and what’s happening here, and make sure that we let everybody know that we’re standing in solidarity with our Cuban leaders.

SPEAKER: Does the President believe that the United States is behind the attacks on the Maduro government in Venezuela?

VICTOR MANUEL LEMAGNE SANCHEZ: Everybody in the world knows the intentions with Venezuela. Venezuela represents the most important oil reservation in the world. So, to effect Venezuela is to effect the rest of the countries in Latin America.

EDDIE CONWAY: Okay, and I know you’ve been here for a little while. How does this trip in America strike you?

VICTOR MANUEL LEMAGNE SANCHEZ: I think it is an important trip for the moment in which it is occurring. Regards to the relationship between the United States and Cuba.

For me, it has been a great impact to see in the different places that I have been in this tour. A huge contrast. Seeing lots of homeless people living under bridges, in a country that is the most richest and powerful on this planet. And many people don’t have access to medical assistance, access to proper food, and access to housing. We don’t have that in Cuba.

EDDIE CONWAY: What do you see as the future of this kind of contact between Baltimore labor unions and Cuban labor unions?

RICARRA JONES: For us, we’re just hoping that it’s starting the beginning of a dialogue, in that … What I saw today is that we have so many lessons that we can learn from what’s happening in Cuba, and a lot of things that we should be striving towards. I think we’re always working on worker rights, but what we see is happening in Cuba, that it’s more about working empowerment, and that’s a place that I hope that we can get to very soon.