TRNN Executive Producer Eddie Conway speaks with barbershop patrons in Baltimore about the high murder rate and what communities around the city should do to stop the cycle of violence.

TRNN Executive Producer Eddie Conway speaks with barbershop patrons in Baltimore about the high murder rate and what communities around the city should do to stop the cycle of violence. 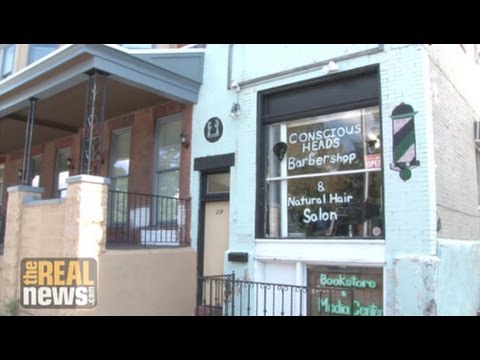 EDDIE CONWAY, TRNN: Welcome to the Real News. I’m Eddie Conway coming to you from Baltimore. I’m now in the Conscious Head Barbershop in East Baltimore and I’m talking to some of the patriots about the murder rate which just recently passed 200 and I’m asking them how this is impacting them.

Why do you think it’s such a high murder rate? What do you think is causing this? Do you have any idea why this violence is at this level in this particular city that’s just a little over half a million people?

CONWAY: But let me switch a minute because it’s a barber over there right now that’s free. How is this–and this is another point, the murder rate is compatible to New York City’s murder rate which is 13 times the size of Baltimore. So how is this affecting you and what do you think we need to be doing?

DORIUS: If we can really, I’m not one to say we reached the youth because it’s not always the youth that needs the main talking to. We need to talk to some of these older folk too that’s letting the youth do this. As far as getting to that, I’m grown enough to say I’m scared. I’m nervous about that. I hate to be nervous. So it will make me react in a certain way this is uncalled for. But the fact of the matter is I get nervous. I got my little one there. I’m in the process of doing a move right now and one of my main things is how safe is the neighborhood? Because I want her to go outside and play. I want to go outside and play with her. But I also don’t want to have to worry about if a speeding car is ready to let off at somebody that’s just randomly walking up the street.

CONWAY: How old you?

CONWAY: And you’re in the 5th grade, maybe?

CONWAY: And how do you feel? Do you feel safe?

CONWAY: Okay because your daddy is there. That’s right. You should feel safe. you have a good day.

And I heard you say we need to talk to the adults as well as the youth. Is there anything, did you think in terms of programs or collective activities we can do to change this?

DORIUS: There’s a few organizations or should be would be leaders that can step up and fill that void. But it’s in if we’re going to reach the people mentally enough to make them want to be involved with those organizations. It’s not like back when y’all were out making moves and stuff like that. Everybody isn’t as involved with the community and the betterment. It’s a whole bunch of free this person or free this person, knowing that they did stuff to be put in that position in the first place. If we can reach those people and get them to not do those said things, then the outcome would be a lot different. And if we talk to the older folks and spread that around then the older folks will start talking to the younger folks.

TAJ: I feel as if the murder rate in Baltimore going up has affected in my family, not so much my family directly but like what I can do outside of the house. I like to go out with my friends but I can’t do that as much because they feel it’s not safe as a it used to be. So in that aspect it does affect my family. It starts with the neighborhoods. It starts with their role models. You’ve got to have these good people in your neighborhoods. You’ve got to have role models. That’s the only way they can get better.

SPEAKER: I mean it’s pretty bad, it’s pretty bad. One of my close cousins was murdered this year a couple of months ago or about a month ago. I mean I’ve seen a lot of death growing up in this city but this was probably the first one that really impacted me close like that. I don’t really know how to digest it. I’m just, I’m lost right now really to tell you the truth. I’m just really trying to stay protected. I’m on the defense, 100%. So I’m just trying to protect my little family. I don’t know. They got me–I’m so in the struggle right now in trying not to fall off the edge just doing the best that I can, that’s all.

CONWAY: What do you think is causing this spike in the murder rate.

SPEAKER: One thing I noticed is all of the people. A lot of the people in the city is getting pushed to certain areas is what I’m noticing. Like a lot of the people from where I grew up on North and Barkley. All of those people that used to live there they all moved down to the east side. Down the hill which is like monument area. So all of those people packed into that one spot, I think it’s just creating a bad–because they really just can’t afford to live around in that neighborhood no more so they all there and I guess they just are resulting to other stuff and it’s just creating a high stress environment.

CONWAY: Thank you for joining me at the Real News.