On the eve of the DNC, activists from across the country gathered in Philadelphia urging president Obama to pardon U.S. political prisoners incarcerated in federal jails

On the eve of the DNC, activists from across the country gathered in Philadelphia urging president Obama to pardon U.S. political prisoners incarcerated in federal jails 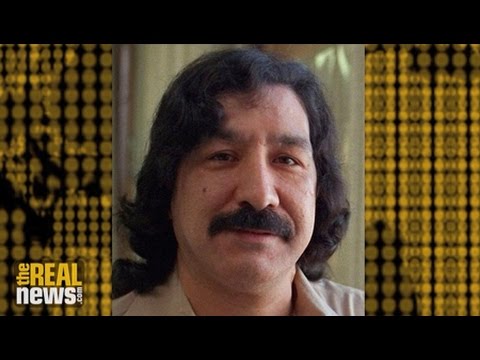 EDDIE CONWAY: On the eve of the Democratic National Convention, a group of activists from across the country met in Philadelphia and called on President Obama to pardon all political prisoners.

CONWAY: Leonard Peltier in particular is one of the few native American political prisoners. Jasmine Heiss from Amnesty International, spoke on behalf of Leonard Peltier and his campaign.

JASMINE HEISS: We are also here to speak to you tonight because Leonard Peltier cannot be. He is separated from all of us and he is separated from his family and his community by thousands of miles and by concrete and steel at the Coleman Penitentiary in Wildwood, Florida. He’s serving two consecutive life sentences for the murder of FBI agents in 1975 and he has been fighting for 4 decades to prove his innocence but he is trapped in a legal process that is so deeply riddled with flaws that his only hope at this point is executive clemency from President Obama.

CONWAY: During the Clinton administration when Hillary Clinton was actually considering running for senate in New York state, there was demands put on the Clinton administration, on Bill Clinton in particular, to release some of the anti-imperialist political prisoners. Some of them he released. He sent to Italy. Some of them he pardoned. And one of the demands was also to release Leonard Peltier. The reaction to that demand caused FBI agents to come out and protest around the White House and pretty much say they wouldn’t offer Secret Service and security protection after Clinton left office if he made that particular pardon active.

HEISS: Now Leonard is 71 years old. He as many of the political prisoners in this country is suffering from a range of health challenges but most recently he was diagnosed with an abdominal aortic aneurysm which if not operated on has a 90% of fatality. Now if the Federal Bureau of Prisons [allows] to operate on Leonard, he should be find he’s not been given either his first MRI result or his most recent MRI so we have no way of knowing how great his health is at this particular moment.

When I visited Leonard in April of this year he said to me, Jasmine I’m afraid that I’m going to die here and it won’t be of old age. When he was incarcerated Leonard was leader of the American Indian Movement and that movement was founded to resist police brutality and the killing of Native people in Minneapolis. It later grew to look at the full monopoly of rights that have been denied by Native people. Rights that are still being denied today.

Beyond that this moment that we face where President Obama has pledged to leave office and give clemency to thousands of people, calls into sharp sharp contrast or reflection these spurious definitions of violence that are handed down by a violent state. Now Obama has said that he is committed to freeing nonviolent drug offenders which is important. Our prisoners are full of people who are locked up because they are black and brown and were [colored] in the war on drugs.

But there are also people convicted of violent crimes who that clemency project is not extended to. And if they are in prison and have any kind of write ups in a violent environment if they have acted violently to protect themselves they’re also not supposed to be considered under this pardoning. And so when we say that people like Leonard Peltier should be free or people like Mia or Wendy said that Albert [Woodfox] should be freed despite his conviction, we are saying this is a violent system and people react within it and people who are unjustly imprisoned need to be allowed to walk free to continue to leave these movements and to lift up the generation that come out.

EUGENE PURYEAR: It’s going to take what it always takes to make huge change in this country which is a mass movement of millions of people that ultimately becomes an irresistible force that no matter who is standing in the way, will ultimately will be wiped away and a new world created. So that’s what we’re doing, trying to drill this movement of millions and end this current phase to make sure we free all political prisoners and that we free them all now. So thank you so much.