Baltimore Trans Alliance's Executive Director Ava Pipitone sits down with The Real News to talk about the recent murder of Black Trans woman Alphonza Watson - the eighth Trans murder victim of 2017 in the United States - and how the Baltimore community can organize against transphobia.

Baltimore Trans Alliance's Executive Director Ava Pipitone sits down with The Real News to talk about the recent murder of Black Trans woman Alphonza Watson - the eighth Trans murder victim of 2017 in the United States - and how the Baltimore community can organize against transphobia. 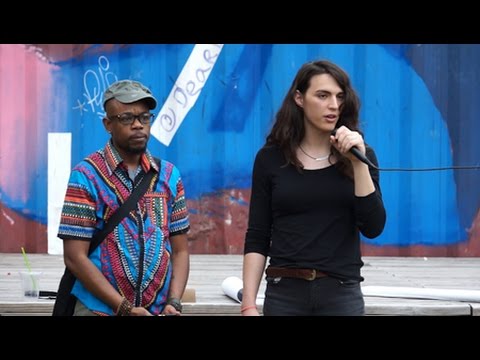 AVA PIPITONE: So, starting with the facts, 4:00 in the morning on Wednesday, Alfonsa was shot in the chest by two men, following an argument. And they got in a car, a dark vehicle, and drove away. That was on the 2400 block of Gilford. So, it’s two blocks from my house. Area where lots of trans, and queer people live and work.

AVA PIPITONE: This is far from the first time it’s happened. Earlier this year we had Chrystal Edmonds lost her life right here in Baltimore City. And not two months ago we had a murder trial for Amir Henderson that went the wrong direction. And that was murder in the same area, as this is common.

MERRICK MOSES: If I could have Sgt. Bailey, Sgt. Bailey, please. Sgt. Bailey is the Baltimore Police’s LGBT community liaison. We are working in partnership to make sure one, that people are adequately protected; but that our sister did not die in vain; to say no to bigotry, violence and hate. If anything can give us hope, we know that in unity we can win.

But what I will say is that for, especially in my black people, when we have BLM we have Black Lives Matters, we tend not to have Black Trans Lives Matters, in that conversation. But trans-women are just as brutalized by police officers, if not more, especially by the same police officers who I see on the stroll, because I’m around here a lot — who buy their services and they will be the first ones to arrest them and murder them.

And you know, it’s happening tomorrow; we’re going to have a vigil and we’re going to come together and heal for that’s really important. It’s going to be at 4:00 o’clock at the Why Not lot, which is on the corner of Maryland and North Avenue.

And I implore cis people to also not be tired or silent anymore because honestly, I don’t know why the fuck you would be tired or silent. You’re not the ones being attacked in this. But I implore you to come out for these people, and that’s all I have to say. (applause)

AVA PIPITONE: This is, what is it number 16, or number 17, trans-person killed this year in the country, under 45’s rule. This is the seventh black trans-woman killed this year; and we’re in the third month.

MERRICK MOSES: We stand in solidarity with many around the country who have been faced with violence since the election. But our resolve is to live and to fight on for our sister Alfonsa, and for those who were tragically taken from us, as a result of hate.

AVA PIPITONE: So, we work to unify the community for that collective healing. We work to reclaim our stories from morbid news headlines like unfortunately, Alfonsa’s morbid news story this week. And we work to empower our trans-people. And we define empowerment for ourselves, whether that means investing in the next generation, skills sharing and passing on our history to the next generation of trans-leaders that are here in the city.

MERRICK MOSES: First of all, I want to start by saying thank you all for coming. Thank you for all your faces because this is what matters. This is how we show them that somebody loves us, right. This past week I had the disturbing phone call letting me know of the death of Alfonsa. And for the past three nights this has haunted me.

Someone notified me that we have gay men dressing up as women to cause these trans-women harm on the stroll — our own LGBTQ community. And I wouldn’t lie to you. These are concerns that come from our community to the community center. … I spoke with a young lady who sat and watched as that lady’s life was taken. … She had… she sat and watched this lady, Alfonsa — shot four times. This young lady was able to walk up to Alfonsa; before she could even say anything else out of her mouth, her only concern was her hair, was how she looked. …