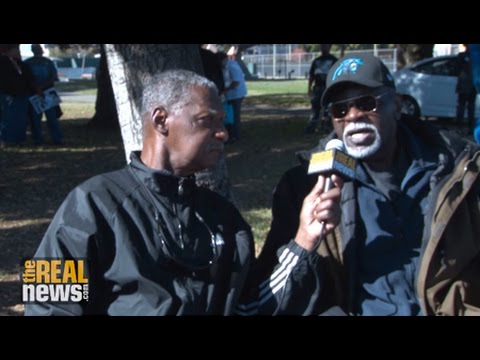 EDDIE CONWAY: Welcome to The Real News. I’m Eddie Conway and I’m in Oakland, California now, in Bobby Hutton’s Park, where they’re celebrating the 50th anniversary of the Black Panther Party. They’re also in the process of giving, of doing a free food give away.

EDDIE CONWAY: I have here with me right now the Big Man, which is like one of the 12 original, central committee members that ran the Black Panther Party.

All right, I want to ask you a couple of questions and I guess the first one is — did you expect to see this 50th anniversary of the Black Panther Party?

ALBERT “BIG MAN” HOWARD: Absolutely not — because I am now 78 years old with all kind of chronic illness and everything, but I came through the worst of that. And a gathering like this here just inspires me to get on my cane and come. I couldn’t resist it. To be able to see my old comrades, like yourself, which is a tremendous surprise and pleasure. And, you know, chapters, people from chapters and branches across the country, even from foreign countries, came to this celebration. So, I’m really blessed and grateful.

ALBERT “BIG MAN” HOWARD: Well, we were community-based, and we started out with a newspaper and distributed into the community, and sent our party members into the community to talk to people. And then we developed programs to help the people in the community. And we had to battle all of the negative stuff from the 70s(?), man. But we did it anyhow. And so, that was something that carried on, you know. Because before you knew it, the government was implementing similar programs, like the breakfast and lunch program. They never gave the Black Panther Party any credit for it.

But, Sickle Cell Anemia — health clinic — we promoted free health clinics for people. They didn’t have to pay a dime. And we got people, of course, in the medical profession right out of the community. These people would go do their job, and in their free time they would come to the free clinic and contribute. So, you know, that kind of thing resonated across this country, and that’s part of what made people know who we were.

EDDIE CONWAY: Is there any advice that you would give young people now, recognizing they still have to find their own way, and set up their own programs. But is there any advice you could share, that you might have learned over these 50 years that might be beneficial to them?

ALBERT “BIG MAN” HOWARD: Yes. I believe back then, and now, that grassroots organizing works. But you’ve got to spend time, and patience, to teach the young people as much as you can. All the while realizing that they can’t do it the same way the Black Panther Party did. But they can take those basic principles and apply them now, you know? And people, if they still believe in supporting the community, then it will take hold. It takes a little time for that, I firmly believe, myself, that it will take hold.

Like the Black Lives Matters, I was so gratified to see that move from just a slogan, and protest, into a movement. And we hopefully, at least I do, that leadership will emerge from that.

EDDIE CONWAY: Considering the election that’s coming up, and the way the country is being polarized right now, do you have any concerns for the future? And, if so, what?

ALBERT “BIG MAN” HOWARD: Well, I… believe in the people. And we got some strong madness going on now with Donald Trump and all of that. But I think eventually the people, young people will see through that, and start to push back and make some changes. ‘Cause that kind of thing is just publicity, mass media hysteria, and stuff like that. So, for as long as I’m alive, then I’m going to try to educate.

I was talking to a couple of young brothers at the photo shoot from Pakistan. And they wanted to get to know what I thought about it, and I kind of laid out what I thought about it, you know. And I have real, real heavy resentment to what America’s doing to their country, because it seems like a concerted effort to destroy civilization. So, those people were around way before there was any United States, and they contributed. And it’s an effort to destroy that, and that pisses me off.

EDDIE CONWAY: All right. Thank you.