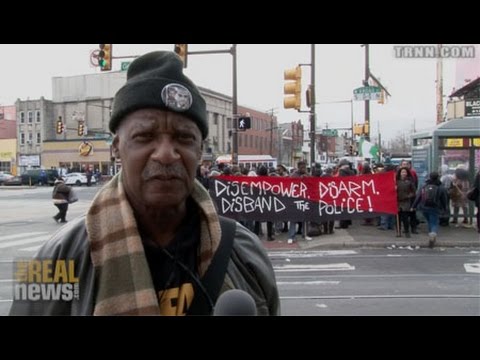 EDDIE CONWAY, TRNN: We are here in Temple University in Anderson Hall, where people are registering. A steady flow of people have been coming in to register for the Black Radical Tradition conference. And I’m here right now, I’m talking to one of the people that’s registered already.

CONFERENCE ATTENDEE: This is a coming together of all sorts of different organizing groups, all sorts of activists, all sorts of intellectuals. And it’s to, to talk about, to theorize, to push forward the movement for black liberation.

CONWAY: I’m Eddie Conway. I’m up here in Philadelphia now. I’m standing on Broad and [inaud.] Avenue, and we are observing a group of people that’s organizing a march from here to Temple, a march for their future.

KATHRYN SUMMERS: My name is Kathryn. I’m representing from, from the BROC collective and the BRAC collective. That’s, the BRAC is the Black Radical Artist Collective, and we’re transitioning to the group called the [maroons], too. The [inaud.], yep.

CONWAY: Okay. Okay. All right, and you helped organize this?

KASHARA WHITE: And we’ve been working on the Black Radical Tradition Conference alongside, you know, some organizers in the city. And we’re really excited about the march today, because we really want to make a statement around unity of, between people of color.

CONFERENCE ATTENDEE: All right. So I’m from New York City and I came down to be a part of the conference. And I’m holding this because whether it’s here, it’s in Baltimore, it’s in New York, we know that the police are the biggest purveyors of violence in our communities. They come in, they harass, they beat, they kill with impunity. And this is actually, we need to recognize that’s their job. That’s what the police are here to do.

CONFERENCE ATTENDEE: The police state is a global epidemic. So why don’t just label it to, just to, what’s going on down here. It’s all over the place. It’s something that needs to be addressed right away.

CONWAY: Something that’s a systemic problem of oppression.

CONFERENCE ATTENDEE: Right. It’s this [inaud.] [epidemic]. And it has to be addressed immediately.

CONFERENCE ATTENDEE: I’m here to support the Black Radical Tradition Conference because as we think about the state of black America right now it’s at a time where–this is the time where change must come if our communities are to stop being maintained by the orders of white supremacy through, like, gentrification, poor school funding, or no school funding, for that matter.

CONFERENCE ATTENDEE: I’d like to see more of the church out here, because I do come from a very Christian background, and it always confuses me when people say they want to be with the masses, and are trying to reach the masses, but they’re never where the masses are.

CONWAY: I’m a former political prisoner, a former member of the Black Panther Party. I just got out of jail after 44 years, right. And it’s my observation that the church has not been doing what it did during the civil rights movement, or even during the black power and black liberation movement. What’s your feeling about the church’s role right now, other than [doctor wright] and you.

REV. LAMONT ANTHONY WELLS: One of the clear things I remember when you’re talking about Dr. King and the letter from the Birmingham jail, I mean, it was very clear that he was responding to a lot of the backlash that he was receiving from the black church.

LIGHTSEY: The primary thing to remember is that we need persons to lead this movement, to continue to be active in this movement, as long as there is oppression, as long as black people are being killed by corrupt cops, we need that full and active participation of all people. Particularly people who are clergy, because that’s part of our ministry.