Far-right governments in Eastern Europe are rehabilitating past Nazi collaborators as national heroes, rewriting the history of the Holocaust to turn the Soviet Union into the villain. Historian Dovid Katz explains how the fascist-apologist "double genocide" myth is spreading

Far-right governments in Eastern Europe are rehabilitating past Nazi collaborators as national heroes, rewriting the history of the Holocaust to turn the Soviet Union into the villain. Historian Dovid Katz explains how the fascist-apologist "double genocide" myth is spreading 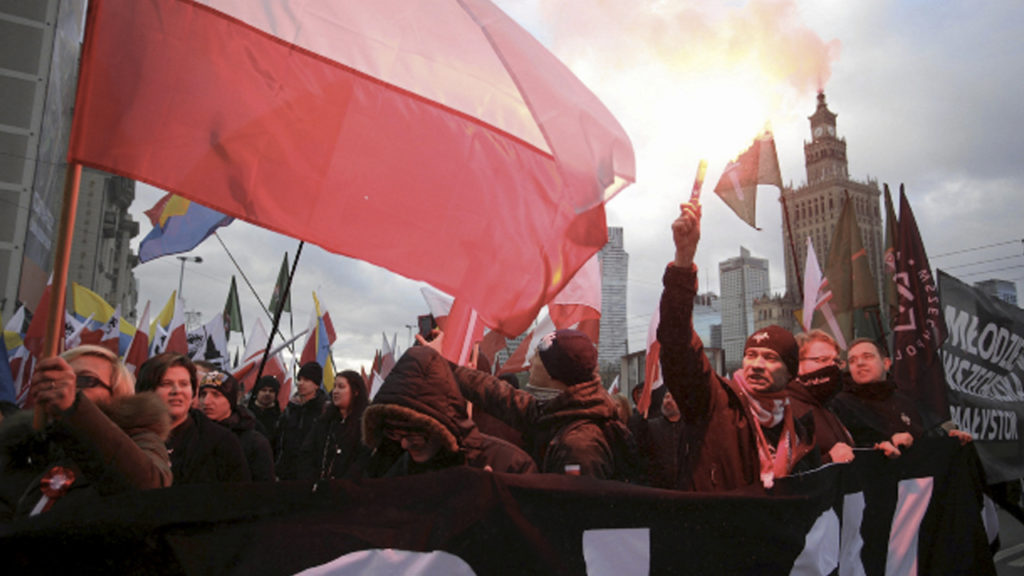 BEN NORTON: It’s The Real News Network. I’m Ben Norton. We’re continuing our discussion here with David Kotz, who is a world-leading expert on Jewish history in Lithuania, and Eastern Europe as a whole. We’re talking about historical revisionism and Holocaust revisionism in Eastern Europe with the rise of far-right movements. There is an increasing attempt to portray past Nazi collaborators as anticommunist heroes, and to try to portray the Soviet Union and its crimes as equal to Nazi Germany and its genocidal crimes. We’re talking about Lithuania, Ukraine, Poland, and other parts of Eastern Europe.

Let’s talk about another example of this we see inside the EU, in fact, and that’s in Poland. Poland has an extremely right-wing government, and there was actually surprisingly a lot of recent media coverage of its Holocaust Bill. And actually some opposition from Israel, which on issues like Ukraine, Israel has largely been silent on many of this Holocaust revisionism. In Poland, Israel pushed back. This Polish Holocaust bill essentially makes it a crime to talk about Poland’s collaboration in the Nazi Holocaust. Can you talk more about Poland’s role in this, as well, and the fact that this is an EU member?

DOVID KOTZ: Right. I have to preface it by saying that before Poland’s disgraceful bill there were many disgraceful bills throughout the area criminalizing free speech on this issue only, on the issue of World War II. Lithuania is a remarkably free country, with a robust discourse and free press and give and take. But in 2010, Lithuania and Hungary passed laws in effect making it illegal to say, as I do, that Stalinism committed horrific crimes, but here in Lithuania, they did not rise to genocide. Similar laws have been passed by Latvia, by Estonia, and indeed by Ukraine in 2015. The Lithuanian law maxes out at two years imprisonment, the Hungarian at three, the Latvian at five, and the Ukrainian at ten years in prison. Now, I don’t know that anybody has gone to prison. But I do know that this has dissuaded young, talented, tolerant liberal scholars in all these countries from pursuing the truth. Young people, understandably, want a good life and a career, and not to become criminals.

Now we come to Poland. Poland is a very different story, in a very important historic sense. Poland was invaded by Hitler on September 1, 1939. It doesn’t share the folklore of the far right in these other countries that saw Hitler’s invasion as some kind of rescue from Soviet domination when it came in June of 1941. In the case of Poland, there are other factors at work. One, Polish people are understandably upset that the Nazi concentration camps are called ‘Polish camps’ sometimes- by mistake, by error. I don’t think anybody means anything. Then there are Holocaust myths and legends, for example that Hitler made the biggest camps in Poland because the Poles were so much more anti-Semitic than everyone else. That’s not true. He put them in Poland because that’s where the Jews were. There were more than 3 million Jews in the interwar Polish Republic.

What is true is that Poland has now taken a turn for the far right, for extreme nationalism, and for a clampdown on democracy. So in a way it was only natural that Poland, too, would pass an unethical, shameful law cracking down on free speech. But the Polish law at least doesn’t demand that people have to adhere to a false narrative of history. It simply criminalizes, sorry, it criminalizes those who would expose the degree of Polish people’s collaboration. For example, during the war, the memories of survivors.

So it’s a very bad law in that it’s against free speech. It criminalizes independent thought on history. And it’s actually a very anti-Semitic law in its wording, because the wording of the law is inherently offensive against Jews, and indeed Ukrainians, who may have different opinions than Polish standard policy. But it does not support in any way double genocide, or an actual revision of the history the way all the other laws. So the Polish law, for many reasons, was the one that hit the international headlines, whereas these other laws have been kept under the radar successfully by the local governments- with American help, I’m ashamed to say.

BEN NORTON: Then finally, just reflecting on this situation, you talk about how this is a problem that’s not isolated to a few countries. It’s growing throughout Eastern and increasingly even parts of Western Europe. We see a massive increase in far-right movements and hate crimes and racial violence. Just looking at this, this very dangerous situation and the spread of double genocide, what do you think the future could look like, and how can people interested in supporting real history and fighting revisionism, and in supporting democratic values of support for all citizens, of anti-racism, how do people respond to this dangerous, growing far-right threat right.

DOVID KOTZ: Several important points in your question, Ben. Firstly, people in the United States and other great Western democracies can contact their elected representatives asking for American support for civil rights, democracy, free speech, among America’s NATO allies or would-be NATO allies in Eastern Europe, to defend those very brave Lithuanians, Latvians, Estonians, Ukrainians who have stood up against the establishment, to protest the downgrade of genocide, of Nazi crimes, and the construction of fake history, in effect. So that’s one very important thing.

So this rewriting of history, firstly, it trashes the amazing American, Canadian, British, Australian contribution to the defeat of Hitler, one of the great achievements of Western civilisation. That’s written out of the history, that there was this great alliance led by the United States and Britain that brought down Hitler. That’s written out of history. And the Soviet Union becomes the only evil in the historic model created, forgetting about fascism. And this is very close to the rise in racism, the rise in even very educated people believing that their blood is better, their blood is purer, that their countries were once pure ethnically before being invaded by enemies. This whole phalanx of far-right thinking is very, very dangerous. And in double genocide, the far right has found a cleaned up, a sanitised mode of expression for far right ideas that flies right under the radar.

For example, the far right in Eastern Europe wants to obliterate, to do away with Holocaust Remembrance Day in January, which happens to be the day that the Soviet Army liberated Auschwitz, and replace it with August 23 as a mix and match day for remembering Soviet and Nazi crimes equally. And In the West it’s dressed up with a beautiful name: Black Ribbon Day. Well, guess what? Black Ribbon Day was passed by the U.S. Congress several years ago, by the Canadian parliament. It’s that under-the-radar campaign that’s affecting more and more Western countries, slowly changing the narrative, alongside a campaign of defamation of smearing and a criminalization of anyone in Eastern Europe who dares stand up.

So I think that the freedom to tell history as it was, the freedom to debate history, is a vital freedom ever more closely related to current-day racism and far right threats.

BEN NORTON: Well, thank you for that extremely enlightening and important interview. We were joined by Dovid Katz, who is the world’s leading expert on Jewish history in Lithuania. He has taught at numerous universities, including Oxford and Yale, and is now a professor at Lithuania’s capital, Vilnius, where he currently lives. And he is the founder and editor of Defending history, which is a website and web journal dedicated to fighting Holocaust revisionism in Eastern Europe. Thanks so much, Dovid.

BEN NORTON: We’ll look forward to having you back some time. For The Real News Network, I’m Ben Norton.