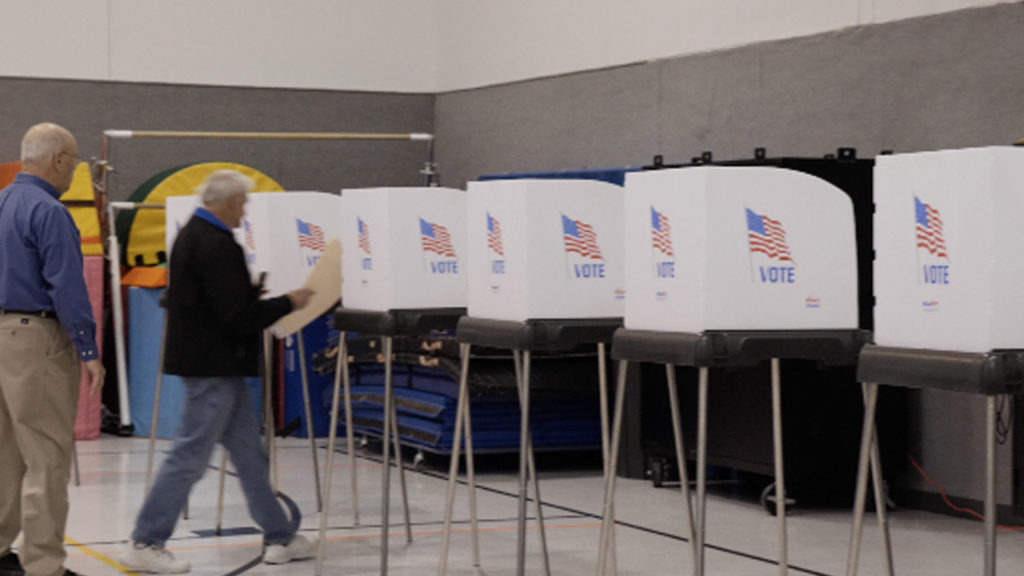 JAISAL NOOR: Welcome to The Real News Network. I’m Jaisal Noor in Baltimore County, and it’s the first day of early voting in Maryland. There’s a lot of interesting races here. The state House is up for grabs. There’s a governor’s race which has drawn national attention. And of course it’s the midterms, and there’s a heated debate between Democrats and Republicans about the future of this country. We were inside earlier. This voting station was packed, and you can see the line right now goes out the door. And we’re talking to some of the folks gathered outside.

What’s your sense of the governor’s race?

ERIC BROMWELL: Here it’s not going to be close. Larry Hogan is going to win by probably a good margin here.

JAISAL NOOR: You’re a Democrat. Did you endorse Ben Jealous, and did you campaign for him?

JAISAL NOOR: Why is that?

ERIC BROMWELL: Like I said, he didn’t come to our area, really. I mean, nobody has been here to campaign for Ben Jealous. I’ve never met Ben Jealous. I’m sure he’s a, he’s a very nice guy. But the Democrats who elected him in the primary tend to have different ideologies than the Democrats that I represent.

JAISAL NOOR: There’s been polling done statewide in Maryland, and the majority of voters do support things like a $15 minimum wage, Medicare for All, legalizing pot, increasing funding to schools beyond the levels that Hogan has thus far. You know, he’s had record funding, but the state’s own studies say that schools are not adequately funded by billions of dollars. What are your thoughts on that?

ERIC BROMWELL: It depends on the polls. Depends on who does the polls. You know, you can, you can ask people if they’re for legalizing marijuana, but at the same time we still have issues with what we’ve done with medical marijuana. So I don’t think that we’re there yet. As far as other issues that might poll well in one area, they might not poll well in another.

JAISAL NOOR: Why are you here today?

JAISAL NOOR: And you voted. You already voted?

JAISAL NOOR: How you feel?

GLORIA PACK: It felt good, because we got to get Trump out of there. He has to go. And his, his underlings, all of those legislators in the South and all this trying to stop people from voting and all, it’s just ridiculous.

GLORIA PACK: Yes. Georgia, and there’s another state, too. There’s a couple of them where they’re trying to suppress the vote.

JAISAL NOOR: What about you? What’s bringing you out here today?

GLORIA PACK: He hasn’t done a very bad job, but I’m not voting for any Republicans. I don’t like none of them. I’m not voting for him. I voted for Ben Jealous. Give him a chance. I think he’s he’s principled, and he could be a good governor.

JAISAL NOOR: The polls have him down double digits, and people that make election predictions have him- give him less than a 1 percent chance. But the polls aren’t always right, but-.

PHILLIP PACK: They are not. That’s what we have the president we have now.

JAISAL NOOR: I wanted to ask you about a ballot measure. There’s a measure on there that would dedicate all casino funding to go into school revenue.

GLORIA PACK: That was Hogan’s thing.

JAISAL NOOR: Well, actually, that’s what he claimed in his ads, but that actually was passed by Democrats. He had his own measure what he proposed, which didn’t- which wasn’t passed. Did you support that ballot measure?

JAISAL NOOR: And you- it sounds like you saw that TV ad by Governor Hogan.

GLORIA PACK: Right, I did.

JAISAL NOOR: It was all over- it’s been all over the airwaves here.

GLORIA PACK: Yes, just like the Republicans are going to give- they support, what is it, preexisting conditions. That’s such a lie. Because they don’t- they voted against it. They tried to kill Obamacare. And when they found out the Affordable Care Act was Obamacare, the white people freaked out. But then they fought. They fought to keep it, because it was a good thing. So you know, it’s just them against us right now. And America needs to heal. You know, America needs to heal. All of those migrants walking from Honduras, and he’s talking about cutting money. Why would you cut money from a poor country? You need to give them more money so they can stay home. But it’s just bad.

JOHN OLSZEWSKI: I believe in my son. He he’s for a transparent government; open, transparent government. His main priority is education. As you may know, he was a teacher for seven years at Patapsco High School, where he taught in the trailers that he knows we have problems with brown drinking water. And when people talk about where you’re going to get the funding for all the initiatives he wants to do, you have to have priorities. Now one of the priorities is we’re spending $300 million for first graders to have laptops a year, at a time when we have brown drinking water. And we also have, you know, kids being taught in trailers. And for him that’s unacceptable.

He also believes in children getting educated early. That’s why he believes in expanded Pre-K. There are studies that say children who go to Pre-K tend to get more jobs when they get older, better jobs, and also they stay out of trouble.

JOHN OLSZEWSKI: Well, what people, a lot of people don’t realize in Baltimore County, because they’re using as a fear tactic, is right now we have areas in Baltimore County that have concentrated Section 8. What the Home Act does is it take Section 8, affordable housing, and it spreads it out throughout Baltimore County. Right now the affordable housing vouchers, you have about 72 percent which consists of seniors, veterans, and you know, individuals of veterans’ minorities. I mean- veterans, seniors, and individuals on disabilities. And the other thing this whole thing started was when I was on the Council of Westchester New York, they had a suit up there where they had concentrated levels-

JAISAL NOOR: Show Me- was that Show Me a Hero, right?

JOHN OLSZEWSKI: I think that’s what it was. And they actually, that local jurisdiction sued. They they filed suit that they weren’t going to do what they wanted, the individual groups, the ACLU, and HUD, and other groups. And that jurisdiction lost the lawsuit. And it cost the taxpayers $42 million. And so there’s a precedent set that we’re doing this- they said we were doing the same thing. That’s what started this whole chain reaction. And that’s where they try to come up with a plan to try to settle where we don’t have all that concentrated Section 8 in one particular area.

JAISAL NOOR: That wraps it up for now, but we’re going to keep bringing you coverage throughout early voting and up until November 6. So stay tuned to TheRealNews.com for all of this coverage, and a lot more. Thanks so much for watching.