Our Revolution's Erika Andiola says Trump, his administration and supporters have incited violence across the country since his campaign

Our Revolution's Erika Andiola says Trump, his administration and supporters have incited violence across the country since his campaign 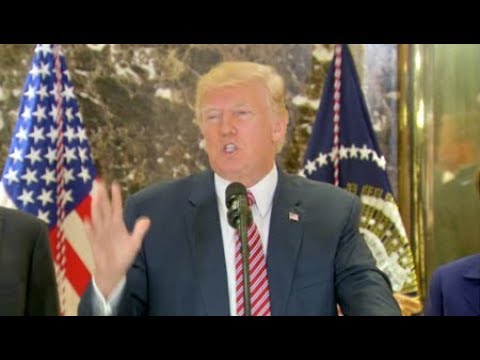 Jaisal Noor:​Welcome to the Real News Network. I’m Jaisal Noor in Baltimore. In breaking news, what’s been called a shocking press conference, President Donald Trump on Tuesday said both sides were to blame for the clashes in Virginia over the weekend, adding that protesters on the political left violently attacked white nationalists rallying against the decision to remove a Confederate statue.

Donald Trump:​There was a group on this side, you can call them the left, you’ve just called them the left, that came violently attacking the other group, so you can say what you want, but that’s the way it is.

Speaker 4:​You said there was hatred, there was violence on both sides?

Jaisal Noor:​Donald Trump has been sharply criticized for blaming many sides for the violence in Charlottesville, but on Monday, had explicitly condemned Neo-Nazi groups. Former KKK leader David Duke praised Trump’s response, saying, “Thank you, President Trump, for your honesty and courage to tell the truth about Charlottesville and condemn the leftist terrorists, Black Lives Maters, and Antifa.”

​Now joining us from Washington D.C. to discuss this is Erica Andiola. She’s now the political director for Our Revolution. Thank you so much for joining us, Erica. We know you’ve only caught a bit of this press conference, but in this press conference, which happened just a short time ago, Trump doubled down on his initial statement on Saturday for which he was broadly condemned by essentially bipartisan consensus for saying that both sides were to blame for the violence in Charlottesville that left both sides injured. One person was killed. I wanted to get your response to that.

Erika Andiola:​Yeah, well thanks for having me, and you know, it’s … I literally just came back from a protest and I was reading about this, and I just can’t even believe that they’re going there. To me, for him to say that, and to not acknowledge the fact that throughout the entire campaign he was using rhetoric that was literally inciting people to violence, he was literally talking about going after people of color, Mexicans, Muslims, immigrants. To me, for him to blame the other side or whatever words he’s using is just … I mean, it’s just incredible to see that. You know, we have to really … we can’t let him create that narrative, because he has been the one inciting violence, and what happened in Virginia should have been condemned by him since the very, very first day.

​This is unacceptable. It’s about also the actions that he’s taking. He has white nationalists in his own White House. This is really … it’s getting to the point that more and more people are starting to realize that he needs to go, that all the language and the narrative he was using during the campaign is really actually taking shape into violence in the streets. We need to continue to push back, and he needs to be out of that White House, ASAP.

Jaisal Noor:​He also said in his press conference that not everyone who attended the rally was a Neo-Nazi or white supremacist. This is what he said.

Donald Trump:​We got to take down the statue because he was a major slave owner. Now we got to take down his statue. So you know what? It’s fine. You’re changing history, you’re changing culture, and you had people, and I’m not talking about the Neo-Nazis and the white nationalists, because they should be condemned totally, but you had many people in that group other than Neo-Nazis and white nationalists, okay? And the press has treated them absolutely unfairly.

Jaisal Noor:​Response to that statement, Erica?

Erika Andiola:​Again, this is not understanding what people are upset about. Right now, people are upset about the fact that he has taken actions against the most vulnerable. He has taken actions against people of color, against immigrants, and his own administration has people like Bannon, has people like Miller, who have literally been out there saying that they are white nationalists. They have a past history of being on this side, right?

​You know, it’s really about his actions. It’s really what he has been doing, and everything that he said during the campaign. So he can’t just turn back and say, “This is their fault. This is the fault of the people who are trying to take down this entire ideology of white supremacy.” It’s about time that the president takes responsibility for what he has created. This is exactly the result of everything that he said during his campaign.

Jaisal Noor:​All right. Erika Andiola, thank you so much for joining us.

Jaisal Noor:​Thank you for joining us at the Real News Network.