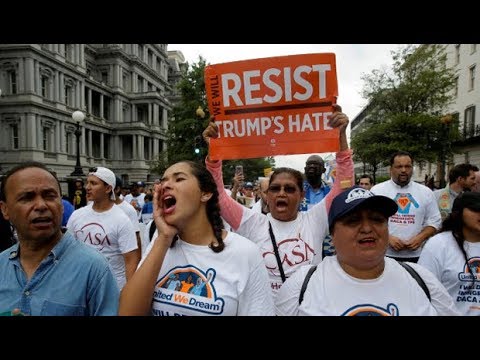 Jaisal: Welcome to The Real News Network. I’m Jaisal Noor in Baltimore. In breaking news, over a dozen people, including Congressman Luis Gutierrez and civil rights leader Ben Jealous, were arrested at the White House today demanding the Trump administration protect DACA, the Deferred Action for Childhood Arrivals program and TPS, Temporary Protective Status program. This comes on the heels of news that the administration’s deportation numbers are actually lagging the Obama administration’s even while immigration arrests are dramatically have increased, as well as news that Trump is considering pardoning the infamous sheriff Joe Arpaio.

Well, now joining us to discuss all of this from Washington is Erika Andiola. Erika was formerly the government relations director for the DREAM Action Coalition, served as the National Latino Outreach press secretary for the Sanders’ campaign, now the political director of Our Revolution.

Thank you so much for joining us, Erika. And, you just got back from this protest in front of the White House. We know a number of progressive leaders were arrested. Talk about why people were in the streets in the capital today. And worth mentioning, people also protesting Trump in New York right now, also demanding the defense of immigrants in this country.

Erika: Yeah. There has been and there is a threat to take away DACA and TPS. DACA, as you may know, is the Deferred Action program that has given a lot of people like myself and other folks who came in as children the ability to work in the U.S. and to be protected from deportation. And TPS, it’s one of those programs that was able to help people stay in the country that have come from countries like Central America or like Haiti and others that have had some sort of natural disaster. So those two programs have protected more than a million people at this point. Unfortunately, there’s a threat from the Trump administration and also from the attorney general from Texas to take away both programs.

And so, today’s protest at the White House, where Luis Gutierrez and Ben Jealous and a couple of other leaders got arrested, was to send that message to Trump that he needs to keep his hands off of DACA, right. It’s just very ironic that today he’s defending or almost defending what happened in Virginia and trying to sort of move away from the real conversation, which is him attacking people of color, him attacking people like DREAMers and immigrants and people with TPS. And so this is a reminder for Trump that his actions speak a lot more than words at this point.

Jaisal: And as the events in Charlottesville unfolded and as on Monday Trump condemned the racism and bigotry of the attacker, at the same time it was reported that Trump is considering pardoning the infamous sheriff Joe Arpaio of Maricopa County. In July, Arpaio was found guilty of criminal contempt for ignoring a court order to stop racially profiling immigrants. He’ll be sentenced in October and could face a maximum of six months in prison. Arpaio was known for his dehumanizing, some would call racist, treatment of undocumented immigrants. Early and vocal supporter of Trump and of the birtherism movement and helped, along with Donald Trump, propel that into the mainstream.

Give us your response to this news about a possible pardon for Joe Arpaio.

Erika: Arpaio is literally the definition of white supremacy. To me, seeing that and again the contradiction between what he has been … The same day, it was actually a couple of hours before this report came out that he was planning or at least considering pardoning Arpaio. Couple hours before, he was condemning white supremacy on a press conference. And so to me, I’m gonna say this again, this action speak a lot more than words.

I’m not the only one saying that Arpaio is racist. I’m not the only one saying that he was going after people just because of the color of their skin. The court has been saying that. And so, it’s very unfortunate that this president can come out in press conferences and say this, right. That he’s condemning these kinds of actions in Virginia, yet he’s literally talking about pardoning someone who has not only arrested and deported, not himself, but turning people into ICE for so many years but also having so many people in jail just because they happen to be brown or people of color. So it’s unfortunate, and I’m hoping that he doesn’t do that. If he does, then America’s gonna see what he really means and who he really sides with. Yeah.

Jaisal: The evidence is just mounting now of his defense of white supremacy. So it should not shock anybody if he does pardon Arpaio. As you said, who is basically convicted of racist treatment of immigrants, of racial profiling. But for those still in doubt, maybe if he does this, this will help change their mind.

I wanted to get also your response to the latest numbers that deportations are actually down so far under Trump. And a reason for this, arrests are up but there’s a logjam in immigration courts. There’s too many people being arrested that they all can’t get deported, I guess, is what’s happening. And Trump has said he wants to hire hundreds of new immigration judges and help get this flow to resume.

What’s your response to this?

Erika: Yeah, I mean, he wants to strengthen the machine. He wants not only to hire more judges, he wants to hire more ICE agents. He thinks there’s not enough to have not only so many ICE agents right now, he wants to add more. Without understanding that this agency has been rogue, and that’s one of the reasons why there has been so many more arrests because ICE has literally been out there lying to our community, going into houses, raiding even schools, right. And so at this point, what concerns me the most is that he is trying to use taxpayer money to open up more jails, to open up more prisons, more detention centers. And at the same time, to get more judges to deport people.

To me, not only is that not a good use of our taxes, but also it’s inhumane. You can’t just put families like mine, you can’t just put families who are in this country trying to work. Many of them have been here for years. Some of them have come just a couple of years ago from Central America or other countries escaping violence. And all they find is literally detention and imprisonment.

This is not what this country should be about. This country should be a country that can open up its arms to refugees and immigrants. And that’s definitely not where Trump is going. I’m gonna say for a third time, those are the types of actions that really show what he wants to do and where he’s coming from, the type of advice he’s getting from Bannon and other people in his administration.

Jaisal: And finally, following up on a point you made. Trump is really seizing upon this machine that was expanded in the previous administrations, including under the Obama administration. If this deportation machine is to be dismantled, what is it gonna take?

Erika: Well, I think honestly it’s gonna take for Trump to be out of office. He needs to leave. I think there’s already some efforts to get him out of the White House. We need to continue to push for that. It’s really scary to think that we have three-and-a-half more years of this. I don’t think it’s gonna get easier. I think a lot of us have to really show a lot more courage. We have to figure out a way to continue to resist, even though we haven’t resisted for years even under Obama. But it’s gonna take some time for us to get organized. But that’s what it’s gonna take.

We gotta come together. Some of us have been marching. Some of us have been demonstrating. I just came back from one of those demonstrations. It’s gonna take that, but it’s also gonna take organizing in our own communities. Building power and at the end of the day, putting people in power that are actually gonna be siding with our communities not white supremacists, not people that are trying to go after the most vulnerable, like Trump.

But this is definitely a short-term resistance struggle that we have to face. And we have to continue to build power for the long-term, for sure.

Jaisal: All right. Erika Andiola, it’s a pleasure as always. Thank you so much for joining us.

Erika: Thank you for having me.

Jaisal: Thank you for joining us at The Real News Network.

Erika Andiola is the Government Relations Director of the DREAM Action Coalition in Phoenix, Arizona. She was brought to the U.S. at the age of eleven and does not have legal documentation; she lost her university scholarships when Arizona passed laws affecting immigrants. With employers afraid to hire the undocumented, she hasn’t been able to…