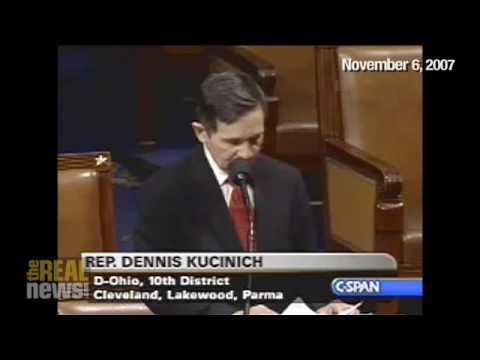 PAUL JAY, SENIOR EDITOR: On Tuesday in the House of Representatives, Dennis Kucinich tried to move his resolution to impeach Vice President Dick Cheney in a crazy back-and-forth of votes to table the motion, votes to send it to the judiciary committee, with the Republicans first voting one way to table it and then changing their minds and then voting not to table it, trying to force a debate, in theory to embarrass the leading Democrats. In the final analysis, it came to a vote whether to let the thing proceed or get stuck in the judiciary committee. And only five Democrats voted with Kucinich, with all Republicans who wanted to push this thing ahead. It was a rather confusing and dramatic day, and to help us make sense of it is David Swanson, the founder of the Website impeachcheney.org. So, David, what the heck happened yesterday?

DAVID SWANSON, CO-FOUNDER, AFTERDOWNING STREET.ORG: Well, you summed it up. The word impeachment made its entrance on the floor of the House of Representatives, which is news and is terrific for those of us in the majority of Americans who want Vice President Cheney impeached.

JAY: Now, how do you know the majority of Americans want the vice president impeached?

SWANSON: Well, if you go to afterdowningstreet.org/polling, you’ll see all the polls on impeaching Bush and Cheney. There have only been two ever done specifically on Cheney, and only one of them national. It was a couple of months ago by the American Research Group, and it found 54% said yes, impeach him, and 40% said no, don’t impeach him. And there was a state poll done just recently in Vermont. It was up to 64% for impeaching Cheney. And all of the news coverage, even the day before yesterday, leading into this and after the vote, very frankly said, you know, the majority of Americans want Cheney impeached, it’s very unlikely Congress will do it.

JAY: Now, in Kucinich’s resolution, what reasons does he give for impeaching Cheney?

SWANSON: Well, he gives only three of the many dozens that could easily be made. And those three are essentially having misled the public and the Congress about weapons of mass destruction—

DENNIS KUCINICH, U.S. CONGRESSMAN (D), 6 NOV 2007: The vice president actively and systematically sought to deceive the citizens and Congress of the United States about an alleged threat of Iraqi weapons of mass destruction.

SWANSON: —having misled the public and the Congress about ties between Iraq and Al Qaeda—

SWANSON: —and having threatened an aggressive war against Iran, which is of course a crime itself. The threat itself is a crime under the U.N. Charter, and therefore via Article 6 of our constitution under our law.

JAY: There can’t be much argument on the substance. What’s holding back the leadership of the Democratic Party? Why aren’t they supporting Kucinich?

SWANSON: The Democratic leadership also wants to avoid a debate. They may have two reasons. One of them is that, you know, they don’t want to touch the subject. They’re afraid. They only play defense; they never play offense. But the other is that they know that if this conversation starts, the case is so solid that they will have to impeach him, and that’s the last thing they want to do.

JAY: Why? Why would that be the last thing? Wouldn’t that just embarrass the Republican Party even further? Why should that hurt the Democrats?

SWANSON: Well, I’m with you. For 230 years, the party that brings impeachment wins. Just in modern history, the Republicans go for Truman. They win. The Democrats go for Nixon. They win huge. The Democrats let Reagan go. They lose. The Republicans go for Clinton against the will of the public and get the White House and both houses of Congress. So you would think go for an impeachment especially when a majority of the public is already clamoring for it as they never were.

JAY: Maybe they’ve come to the conclusion that this would simply offend people’s patriotism at a time of war to go after the vice president. One certainly hears this over and over again—you’ve got to be careful, during a war, how you go after the White House.

SWANSON: And yet this is the vice president with 11% approval; this is the vice president with 90% of the country saying they don’t approve of him in a time of war. Right? So the public is out ahead considerably. This president today took the record in Gallup polls for unpopularity from Nixon. These are record unpopular president and vice president. So why wouldn’t the Democrats go against them? I think part of it is that fear of what Fox News will call them. But a lot of it is wanting to play it safe. They came in at the beginning of this two-year session with the idea of keeping the occupation of Iraq and Bush and Cheney around for two years in order to run against those three things the same as they’d done two years before, because they won so well getting elected to deal with those things, if they could pretend to try to deal with them for two years but fail, they could run against them again.

JAY: There was a very telling moment in one of the Bush-Kerry television debates where Kerry, after months of not even mentioning Iraq, finally went after President Bush on the Iraq war. And Bush turned to Kerry and looked him in the eye and said, you know, you knew what I knew, and you voted for this, so how can you come after me? And I wonder if there’s some of that playing out, that Cheney can say to them, listen, you were part of this. How can you impeach me?

SWANSON: Well, that is a concern I’m sure that some Congress members have about the war. Most of the Democrats voted against it, but they’re not the ones running for presidency, other than Dennis Kucinich. But if you wanted to impeach Cheney or Bush, there are much easier ways, right? The House Judiciary Committee passed an article of impeachment against Nixon for refusing to comply with subpoenas. Cheney and Bush and Condi and others have refused to comply with subpoenas—no investigation needed, no complicity by the Congress, no dispute about it. Impeach them both in an afternoon. Foreign Intelligence Surveillance Act—Bush openly confesses to violating it. The torture. The Congress is not complicit in the torture. I mean, you’ve got dozens of impeachable offences for Bush or Cheney or both of them that Congress is very little or not at all complicit in.

JAY: Tell us about the Impeach Cheney—and I think it also included Bush, at least up until recently—what is the campaign like across the United States? What kind of support does it have?

JAY: What’s next? In terms of the real process in Washington, is this done? Or is Kucinich really going to make another move?

SWANSON: One possibility is a discharge petition: get a majority of House members and get it out of committee. Another possibility is to work with Conyers and with Jerrold Nadler, who chairs the relevant subcommittee, and try to come up with a hearing on the vice president that they will proceed with. And there’s such a huge menu of choices, they ought to be able to find one. If not, one of the three articles that Kucinich has introduced. But for the public it continues to be to push those eighty-six to join the twenty-two who are co-sponsoring the bill, you know, push those twenty-two to join the five who are really willing to take a stand when it comes to it and to speak out publicly. If we can get Maxine Waters, who stood strong to the end, to get out with Dennis Kucinich, and maybe Sheila Jackson Lee, and maybe Keith Ellison, some members of the judiciary committee to push Nadler and Conyers for hearings, and for them to push Pelosi, which it all comes down to.

JAY: Why can’t they make this thing move at that level of the judiciary committee? And certainly Conyers [cross talk] the committee is not some right-wing Democrat.

SWANSON: Conyers can. Conyers could listen to the speeches he goes out and makes every week about Martin Luther King and Frederick Douglass and people who challenged the system and did right in the face of adversity, but he hasn’t thus far. And as recently as this weekend, he gave a speech again where, within the same breath, he said he’s for impeachment and he’s against it. And it all comes down to Nancy Pelosi. We packed John Conyers’ office back in July. We went to jail. And we had Cindy Sheehan, and Ray McGovern, and Rev. Lennox Yearwood speak with him for hours, and it came down to Pelosi and his unwillingness to challenge her.

JAY: We shall see how this unfolds, and we hopefully will talk to you again soon. Thank you very much, David.

SWANSON: Thank you. My pleasure. 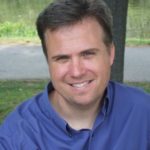